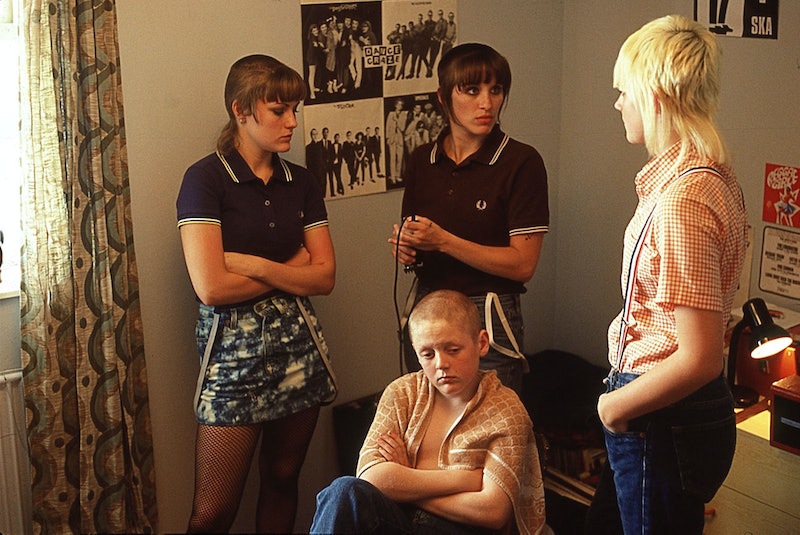 The 2006 film This Is England followed the character of Shaun Fields as he earned the respect of a gang of skinheads, after standing up to them. The relatively small production became a huge success and went on to spawn three television series, each of which followed the film's characters in the years 1986, 1988 and 1990, respectively. Since the Channel 4 miniseries came to an end in 2015, we haven't seen much of the cast appearing together. However, the recent wedding of the film's lead actor, Thomas Turgoose, saw the This Is England cast reunite for the first time.

Turgoose, who was just thirteen years-old during filming of the original movie, is now 26, and married fiancé Charlotte Revell in a beautiful New Years Ever wedding ceremony, The Sun reports, and his former This Is England cast mates were right by his side. Adorable. As reported by the newspaper, in attendance were Vicky McClure, who played Lol Jenkins in the film, Jo Hartley, who portrayed the actor's onscreen mother, Cynth, Stephen Graham, who played Combo, Andrew Shim, who starred as Milky, and Andrew Ellis, who played the character known as Gadget. Whilst at the wedding, McClure shared a variety of photos from the big day, and captioned the post "Definitely best way to see the new year in...With loads of love. Huge congratulations @thomasturgoose1 & @charlottelucy92."

The groom also took to Instagram to share snaps of the ceremony to his 62.4 thousand followers. In one post, the former child star and his new wife are seen covered in confetti, presumably taken shortly after their nuptials, and the caption read: "Oi can we talk about me marrying my best mate yesterday?" The This Is England star then delighted fans of the franchise when he uploaded a picture of himself, his new wife, and all of his former co-stars who attended. The image was simply captioned "Family."

Many fans joined in with the celebrations on social media by congratulating the 26 year-old and his beautiful bride. According to The Sun, one fan commented "Wedding guest list goals. Congratulations to you both," whilst another added "One of the best photos ever." And the reunion snap most definitely caught the attention of the actor's followers, one of whom replied with the message "Why do I feel like its members of my family? Like, where was my invite guys?"

This Is England was Turgoose's first major film role, and the actor's performance in both the film and accompanying television series was critically acclaimed. He eventually won a BIFA for Most Promising Newcomer shortly after the movie's release, the Guardian reports, and the film itself enjoyed an array of positive feedback. This Is England currently boasts an impressive 93 percent approval rating on the review-aggregation website, Rotten Tomatoes, and the critics consensus on the site describes the film as being "A moving coming-of-age tale that captures the despair among England's working-class youth in the 1980s."

It's heartwarming to see that the cast of this modern classic are indeed still close, so let's hope the next reunion is an on-screen one.