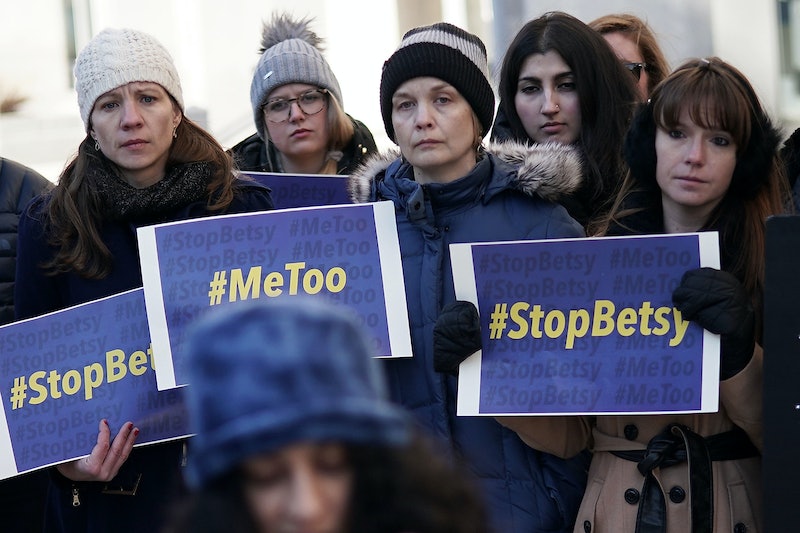 Nearly six months ago, the public learned of the Trump administration's plan to change the guidelines for how schools respond to accusations of sexual assault. The last chance to submit comments on Betsy Devos's proposed Title IX changes will be Friday, in light of a website issue that may have impacted comments received before the initial deadline.

Comments were supposed to close on Jan. 30, but there was a technological glitch on the website, according to NBC News. Because of the error, the Department of Education (DOE) will accept comments for one more day. That day is Friday, Feb. 15.

The policy alterations have been in the works for nearly two years. After a summer spent signaling that changes were coming, DeVos announced she was peeling back Obama-era guidance regarding sexual misconduct on school campuses in September 2017, at which point she instituted temporary guidelines.

The permanent proposed changes were first reported on by The New York Times last August, when the paper obtained a copy of the draft policy. The DOE formally proposed the changes at the end of November, opening a 60-day comment period. The proposed changes do not require congressional approval and, if enacted, will "have the force of law," per The Times.

Comments can be submitted online, mailed, or handed in in-person. During the initial comment period, over 100,000 responses were submitted, according to the Federal Register's website.

Under Obama-era guidance, sexual harassment was defined as "unwelcome conduct of a sexual nature." However, under the proposed changes, sexual harassment would be defined as “unwelcome conduct on the basis of sex that is so severe, pervasive and objectively offensive that it effectively denies a person equal access to the school’s education program or activity” or a school employee using sexual favors as a type of bribe or coercion.

Beyond that, the proposed changes would only require an alleged incident to be investigated by a school if it took place on campus, or else at a school-sponsored event. This could potentially pose problems for victims who are assaulted or harassed off-campus, even if they are being accosted by a peer, and some critics have argued that it would let school administrators off the hook in such situations.

Additionally, any alleged incidents, under the proposed changes, would have to be reported to "an official with authority to take corrective action. This could, depending on an individual school's unique hierarchy, disclude a whole subset of on-campus adults and educators from being mandatory reporters, per The Chronicle of Higher Education.

But reporting rules are not the only procedures which would change, under DeVos' proposal. School's would be allowed to defer to a higher standard of evidence when determining a student's guilt, and accused individuals would be allowed, through a lawyer or adviser, to cross-examine their accuser, The Chronicle of Higher Education explained in November.

"Secretary DeVos' long-awaited rewrite of Title IX enforcement regulation is worse than we thought," Jess Davidson of End Rape on Campus said in a statement released in November. "It will return schools to a time where rape, assault, and harassment were swept under the rug."

Under law, the DOE is required to read every comment it receives. In the interim, it remains unclear whether the department will formally move to enact the changes.