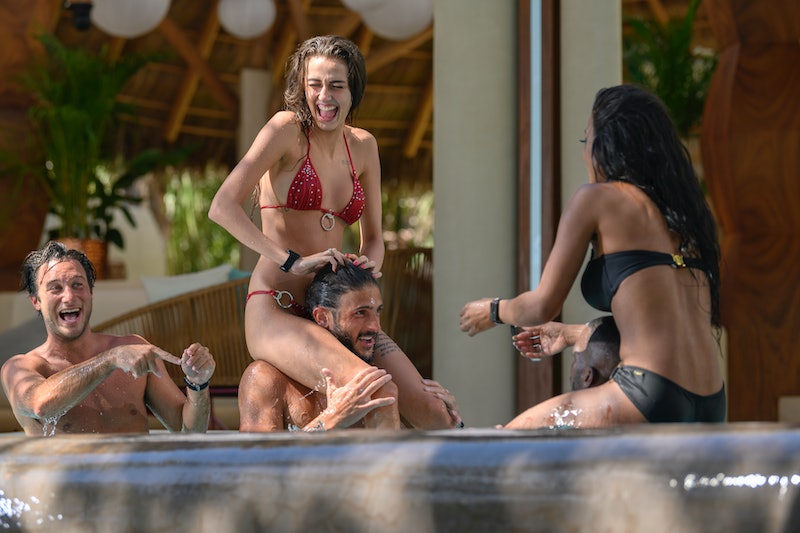 The next Netflix reality TV phenomenon is almost here, and no, the contestants aren't forbidden from seeing each other — but they can't really touch each other either. Netflix's Too Hot to Handle cast were essentially under a "no sex" rule. The show put a bunch of young, hot, and carefree people on an island for the sexiest summer of their lives, but, if they engaged in any sexual activity, they lost money from the shared $100,000 grand prize.

In a new interview with Entertainment Tonight, published on Thursday, April 16, the Too Hot to Handle cast explained how they felt about the show's limit on physical intimacy. And as it turns out, they actually weren't all that sad about it.

When 22-year-old British contestant Chloe Veitch heard about the rule, she felt both relief and disappointment. "I thought it was going to be just like a dating show... you get put in these different challenges together, and you hook up," she said. "When I heard that we were not allowed to kiss, a part of me was glad because I don't want my nan or my mom to see me do rumpy bumpy on the TV."

It came as slightly less of a shock to Canadian model Francesca, who said that she had "no idea" what to expect from the show at all, even after she signed on. "It could have been a show like Survivor, it could have been a show like The Bachelorette, it could have been like Love Is Blind," she said. "I knew I had to be single, that is the requirement, and like sunshine, so I was like, 'OK, perfect! I am golden.' Right before we left for filming, we found a note that it was called 'untitled dating show,' so then I was like, 'Perfect, this is great.'"

On the island, the contestant's sexual intimacy was closely monitored by a working, cone-shaped robot named Lana — yes, seriously. And apparently, she had eyes and ears literally everywhere. "Lana can see into the shower," contestant Sherron Townsend revealed to ET. "Lana can see everything. Lana actually sees and knows all." It sounds like Nick and Vanessa Lachey have some tough competition for best Netflix show hosts.

Overall, all of the contestants seemed grateful for the experience, and similar to Love Is Blind, it seems that their emotional connections were very strong as a result of the unorthodox rules. "It was a once-in-a-lifetime experience," British coach David Birtwistle told Men's Health. "It's something that I'm really grateful for. I don't think I'll ever get something similar to that again."

All eight episodes of Too Hot to Handle will stream on Netflix starting on Friday, April 17.

More like this
Bachelor Nation's Blake Horstmann Is Dating 'Love Is Blind' Star Giannina Gibelli
By Jake Viswanath and Radhika Menon
Move Over, 'Sunset'! The Drama-Filled Trailer For 'Selling The OC' Is Here
By Nola Ojomu
Here’s Everything Coming To & Leaving Netflix In July
By Grace Wehniainen
Pete Davidson Pops Up In This Hidden Scene From The Kardashians Season Finale
By Jake Viswanath
Get Even More From Bustle — Sign Up For The Newsletter