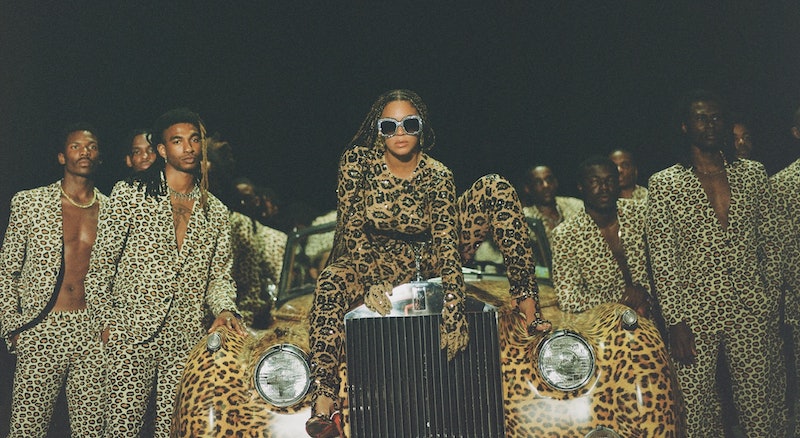 Written, directed, and executive produced by Beyoncé, Black Is King is the visual companion to 2019’s The Lion King: The Gift. In a statement sent to Bustle, a spokesperson for Disney+ (where Black Is King will launch) explains that the visual album “reimagines the lessons of The Lion King for today’s young kings and queens in search of their own crowns.” Now the first teaser trailer for Black Is King has been released, offering us a glimpse of what looks to be another artistic masterpiece.

Speaking about the story told in Black Is King, the Disney+ explains:

"The voyages of Black families, throughout time, are honored in a tale about a young king’s transcendent journey through betrayal, love and self-identity. His ancestors help guide him toward his destiny, and with his father’s teachings and guidance from his childhood love, he earns the virtues needed to reclaim his home and throne."

Featuring artists such as Childish Gambino, Kendrick Lamar, Jessie Reyez and Pharell – as well as guest appearances from Jay-Z and Blue Ivy – Black Is King "is an affirmation of a grand purpose, with lush visuals that celebrate Black resilience and culture. The film highlights the beauty of tradition and Black excellence."

This excellence was also highlighted by Beyoncé at the BET Awards last night (June 28), where a teaser of Black Is King was aired. Introducing the singer to the BET stage, Michelle Obama said: “Ever since she was a little girl in Houston, Beyonce Knowles-Carter has been lighting up stages and gracing the world with her talent, with her generosity of spirit, and with her love for her community."

The former first lady continued: "You can see it in everything she does, from her music that gives voice to Black joy and Black pain, to her activism that demands justice for Black lives. And no matter how big the stages get, I know my girl isn’t satisfied unless she’s sharing all that shine she has with the next generation."

Accepting the Humanitarian Award from Michelle Obama, the singer used the moment to highlight the importance of voting, especially among Black communities. “You’re proving to our ancestors that their struggles were not in vain,” Beyoncé said in her virtual acceptance speech. “I’m encouraging you to continue to take action, continue to change and dismantle a racist and unequal system. We have to vote like our life depends on it, because it does.”