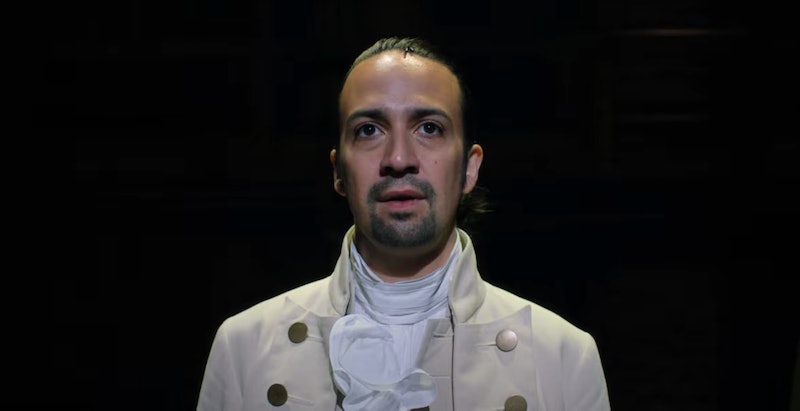 With all theatre shows currently suspended in the UK due to COVID-19, those who booked tickets for Hamilton are in a seemingly never ending limbo. Thankfully, one streaming giant has given theatre-goers somewhat of a silver lining, as the musical will be available to stream next month. On June 21 Disney+ dropped its first trailer for Hamilton, showcasing major moments from a 2016 performance.

Filmed at The Richard Rodgers Theatre on Broadway, the film “combines the best elements of live theatre, film and streaming to bring the culture phenomenon to homes around the world for a thrilling, once-in-a-lifetime experience,” a press release obtained by Bustle reads.

Lin-Manuel Miranda announced the news in March to the rejoice of fans, as the film was initially set for release in cinemas in October 2021, per Radio Times. Directed by Tommy Kail, the performance was filmed before original members of the cast left the Broadway production in 2016. “[Kail has] basically given everyone at home the best seat in the house and it’s a thrilling experience,” Miranda told Good Morning America in March. “He really threads the needle between these cinematic close-ups and widening out and seeing the show from the centre aisle of the Richard Rodgers Theatre.”

Hamilton has been available to stream on YouTube and other sites over the past few years, but this upcoming production will be the first time that Hamilton has been given the cinematic treatment. As was the case with Cats direct-to-video musical in 1998, this provides audiences who’ve not had the chance to see the musical in theatres experience it at home.

If you only want to watch Hamilton on Disney+, you’ll have to subscribe to the service. Previously, you could opt for a seven-day free trial before starting your subscription but as of June 19, this is no longer an option. “We continue to test and evaluate different marketing, offers, and promotions to grow Disney Plus,” a rep for the company said in a statement (via Variety). “The service was set at an attractive price-to-value proposition that we believe delivers a compelling entertainment offering on its own.”

Although, like Netflix you can share your subscription with up to seven people. So if you’re mates or other family members have a subscription, you can always ask to be added onto theirs to stream Hamilton once it goes live.