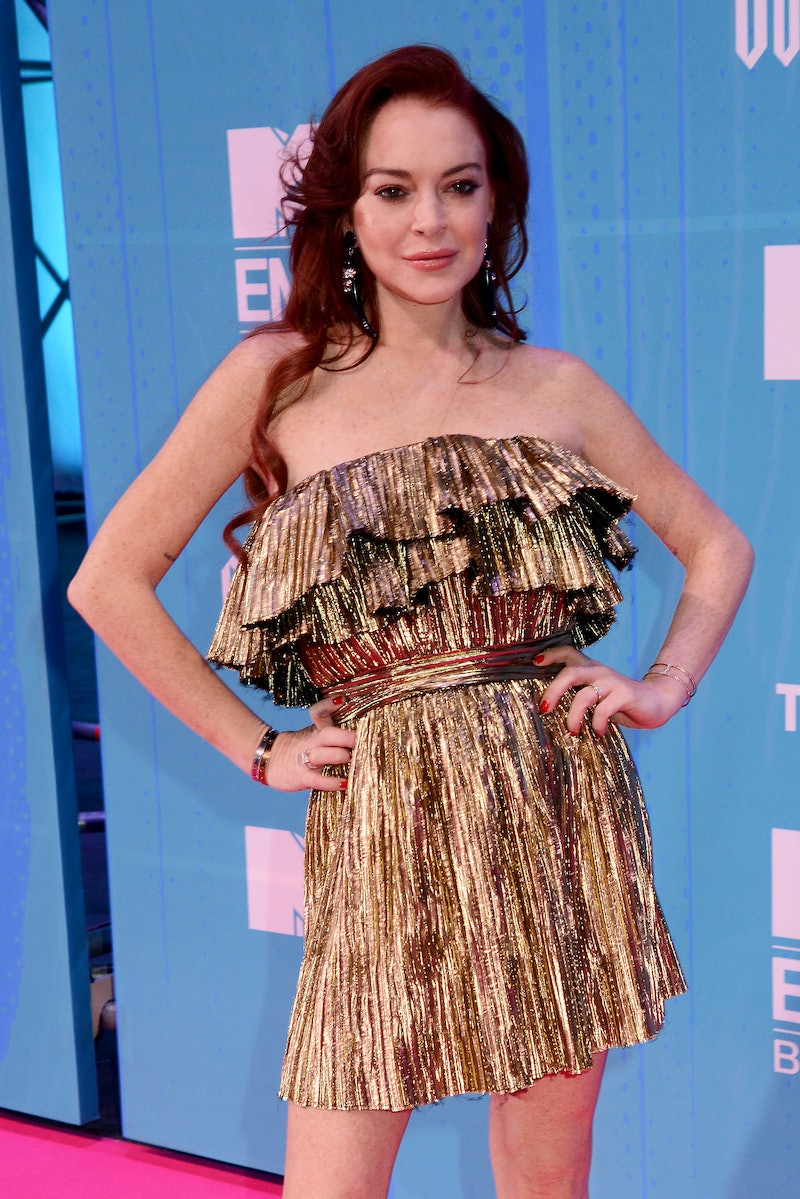 In addition to all her artistic talents, it's no secret that Lindsay Lohan is sort of famous for her nightlife endeavors. (For better or worse.) But, in this new trailer for Lindsay Lohan's Beach Club, Lohan's new reality show — which MTV released Monday afternoon, Dec. 3 — the star seems to be taking a different approach to partying these days. "I've gone through so much in my past," says Lohan at the clip's start, before adding, "People have always given me trouble for going to clubs. So, why don't I just open my own?"

And cut to: A shimmery, evening-lit shot of Lohan Beach House, the star's latest entrepreneurial venture, which will provide the primary backdrop for her upcoming MTV reality series, appropriately titled Lindsay Lohan's Beach Club. The first few tidbits about the show began trickling in several months ago, over the summer. But, as of Monday, MTV has officially announced the series' release date, which is only a little more than a month away, on Tuesday, Jan. 8. (And, according to a new press release, MTV will revisit some of Lohan's famous past in a TV special tentatively titled Lindsay Lohan: Most Memorable Moments, airing Monday Jan. 7.)

The series' name seems to have gleaned inspiration from more than one of Lohan's paradisal business locales. While the MTV series will chronicle the launch of Lohan Beach House — a restaurant-nightclub situated along the sparkling shores of Mykonos, Greece — those who've been following Lohan's Mediterranean business ventures these last few years might know the Beach House isn't really the first of its kind. Back in 2016, she opened Lohan Nightclub, a dance hall in Athens.

In light of its popularity (Lohan clearly knows how to throw a party), she started expanding the franchise during the earlier part of 2018. As several outlets reported back in May, the star opened Lohan Beach House in two equally gorgeous locations around that time: One on the Greek island of Rhodes, and the other in Mykonos.

"Welcome to my Mykonos," Lohan says proudly near the new trailer's start, as a sunglasses-clad man helps her descend from a motorboat onto shore. Continuing, she set the record straight: Lohan might not necessarily be a veteran venue-owner, but make no mistake, she's still looking for top-notch employees. "To work for me, you have to be the best of the best," she continues in MTV's preview video, as it pans to a quick montage of snippets that see the restaurant-nightclub staff very much in their element. She is, after all, building her "empire."

Per a Monday press release from MTV, Lindsay Lohan's Beach Club will see Lohan "calling the shots," as her hand-picked team of hosts hustle "to secure Lohan's name as the definition of vacation luxury." Hey, with a burgeoning empire of coastal Beach Houses well underway, that might not be such an implausible feat. And honestly, who else is already counting the days until they're watching Lohan show her restaurant-nightclub crew who's boss on national TV? As far as party planning and running a business (or several, rather) are concerned, it seems safe to say she's totally a natural.