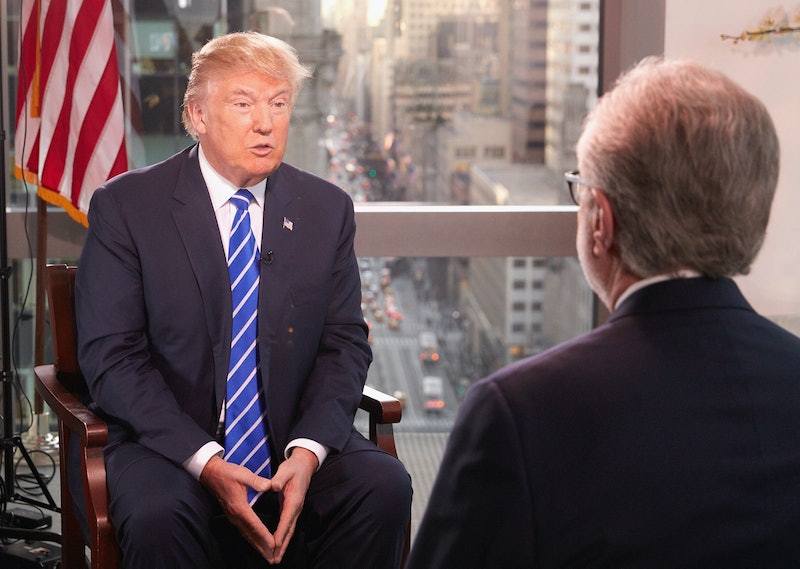 The Super Bowl may be the biggest event of the weekend, but Donald Trump's second presidential interview is definitely number two. During his brief sit down with Fox News' Bill O'Reilly, Trump advertised some of his upcoming political agenda, providing some valuable insight into what the White House’s next actions might be. Trump's pre-Super Bowl interview transcript is a strong confirmation that foreign policy is going to continue to be the biggest priority of his administration.

The interview highlights include Trump's assertion that past American leaders were "killers" just like Vladimir Putin, an update on the Iran nuclear deal, and the proposed but troubled southern border wall. Trump didn’t introduce anything particularly new or shocking during the interview, choosing mostly to focus on campaign promises that he’s planning to make reality in the coming months. While there’s a growing movement from the political left not to react to these promises much, it’s still important to remember that each of Trump’s policy proposals needs to be considered independently and fairly. Even if he’s already said it’s what he’s going to do, people are justified in freaking out about the border wall and the relationship with Russia. The interview is a reminder to hold Trump accountable, because even if he’s keeping his promises, they’re not necessarily good promises to begin with. Read the transcript below for more fuel for your resistance.

O’Reilly: So another big week for the Trump administration. Judge Gorsuch, that rollout went very smoothly, I think.

Trump: Yes it did, yes it did.

O’Reilly: But the refugee deal, not so much.

Trump: I think it was very smooth. We had 109 people out of hundreds of thousands of travelers and all we did was vet those people very, very carefully.

O’Reilly: You wouldn't do anything differently if you had to do it over again? Some of your people didn’t really know what the order was.

Trump: Well, that's not what General Kelly said. General Kelly — who's now Secretary Kelly — he said he totally knew, he was aware of it, and it was very smooth. It was 109 people.

O’Reilly: Let's talk about Iran, your assessment. Do you think we're on a collision course — we being the United States — with that country?

We gave them $1.7 billion in cash, which is unheard of, and we put the money up and we have really nothing to show for it.

O’Reilly: Possible you’ll tear it up?

Trump: We’ll see what happens. We’re going to see what happens I can say this: They have total disregard for our country. They are the number one terrorist state, they are sending money all over the place, and weapons, and you can’t do that.

O’Reilly: Sanctions, that’s how you’re gonna start with them. But you’re moving a carrier right?

Trump: I never talk about military moves. I always criticized President Obama with having an announcement that they’re going into Mosul. They give the name, the date the time. I don’t believe in that.

O’Reilly: So you’re not real bullish on Iran at this point.

Trump: I’m not bullish. I think they have total disrespect for our country and I understand that deal. I would have lived with it if they said “OK, were all together now,” but it’s just the opposite. It’s like they’re emboldened. They follow our planes, they circle our ships with their little boats and they lost respect because they can’t believe anybody could be so stupid as to make a deal like that.

O’Reilly: You talked to Putin last week. You had a busy week last week.

Trump: Busy week and a half.

O’Reilly: Do you respect Putin?

Trump: I do respect him but —

Trump: Well, I respect a lot of people but that doesn’t mean I’m going to get along with him. He’s a leader of his country. I say it’s better to get along with Russia than not. And if Russia helps us in the fight against ISIS, which is a major fight, and Islamic terrorism all over the world — that’s a good thing. Will I get along with him? I have no idea.

O’Reilly: But he’s a killer though. Putin’s a killer.

O’Reilly: I don’t know of any government leaders that are killers.

Trump: Well — take a look at what we’ve done too. We made a lot of mistakes. I’ve been against the war in Iraq from the beginning.

O’Reilly: But mistakes are different than —

Trump: A lot of mistakes, but a lot of people were killed. A lot of killers around, believe me.

O’Reilly: Let’s talk about Mexico. There’s a report that you talked to President Nieto and you told him — this was the report, I want to know if it’s true or not — that if his army couldn’t handle the drug cartels, that U.S. army soldiers would. Did you say that?

Trump: We have to do something about the cartels. I did talk to him about it. I want to help him with it. I think he’s a very good man. We have a very good relationship, as you probably know. He seemed very willing to get help from us because he has got a problem, and it’s a real problem for us. Don’t forget those cartels are operating in our country. And they’re poisoning the youth of our country.

O’Reilly: At this point, do you consider Mexico a corrupt country? Because this stuff has been going on for decades.

Trump: I love the people. I really like this administration. I think he’s a good man. We get along very well. But they have problems controlling aspects of their country. There’s no question about it, and I would say the drugs and the drug cartels, No. 1.

O’Reilly: Have you figured out what kind of a tariff you’re gonna levy on Mexico to pay for the wall?

Trump: Well, right now it’s very unfavorable. Right now, we’re losing our jobs to Mexico. You look at the plants, these massive plants. Now I have to tell you, I’ve turned it around already, I’ve turned it around. You see that. Ford has been phenomenal. They cancelled a plant. They’re building tremendous ...

O’Reilly: Yeah, you intimidated them. They’re afraid of you.

Trump: I don’t know if they’re afraid of me. They wanna do what’s right.

O’Reilly: They wanna do what’s right? Why didn’t they do what was right in the past? They’re afraid of you.

Trump: Because the wrong people spoke to them. But they’re gonna do what’s right, and they’re bringing jobs back to Michigan and Ohio and Pennsylvania and all the places that have lost their jobs. That’s already happening. I think you’re gonna see tremendous job growth in this country.

O’Reilly: Let’s turn to domestic policy. I just spent the week in California. As you know, they are now voting on whether they should become a sanctuary state. So California, and the USA, are on a collision course. How do you see it?

Trump: Well, I think it’s ridiculous. Sanctuary cities, as you know, I’m very much opposed to sanctuary cities. They breed crime, there’s a lot of problems. If we have to, we’ll defund. We give tremendous amounts of money to California — California in many ways is out of control, as you know. Obviously the voters agree, otherwise they wouldn’t have voted for me.

O’Reilly: So defunding is your weapon of choice?

Trump: Well it’s a weapon. I don’t want to defund a state, a city.

O’Reilly: But you’re willing to do it?

Trump: I don’t want to defund anyone. I want to give them the money they need to properly operate as a city or state. If they’re going to have sanctuary cities, we may have to do that. Certainly that would be a weapon.

Trump: Many people have come out and said I’m right. You know that.

O’Reilly: I know, but you’ve gotta have data to back that up.

O’Reilly: So you think you’re gonna be proven correct in that statement?

Trump: Well, I think I already have. A lot of people have come out and said that I am correct.

O’Reilly: But the data has to show that 3 million illegals voted.

Trump: Forget that. Forget all of that. Just take a look at the registration, and we’re gonna do it, and I’m gonna set up a commission, to be headed by Vice President Mike Pence, and we’re gonna look at it very, very carefully.

Trump: I think so, yes, and I think before the end of the year. I would like to say yes.

O’Reilly: Can Americans in 2017 expect a new healthcare plan rolled out by the Trump administration, this year?

Trump: In the process, and maybe it’ll take until sometime into next year, but we are certainly gonna be in the process. Very complicated. Obamacare is a disaster. You have to remember, Obamacare doesn’t work. So we are putting in a wonderful plan. It statutorily takes a while to get. We’re gonna be putting it in fairly soon. I think that, yes, I would like to say, by the end of the year, at least the rudiments, but we should have something within the year and the following year.

O’Reilly. Last question. You get four hours of sleep or some crazy thing like that. When your head hits the pillow, do you ever say to yourself, “I can’t believe I’m here. I cannot believe that I’m the president of the United States when I wasn’t a politician, I didn’t start out this way, that wasn’t my life goal?” Does that ever come into your mind?

Trump: Well, I must tell you, the other day, I walked into the main entrance of the White House, and I said to myself, “This is sort of amazing.” Or you walk into Air Force One. It’s like a surreal experience, in a certain way, but you have to get over it, because there’s so much work to be done, whether it’s jobs or other nations that truly hate us. You have to get over it.

O’Reilly: Football. How do you see this game?

O’Reilly: They’re all taking gas because of that, you know.

Trump: I know, they’re talking a lot of heat. But you know what? They’re also getting a lot of popularity out of it. I think they’re gonna do very well. Tom’s a winner.

O’Reilly: So you’re rooting for the Patriots?

O’Reilly: Sure. Now, Fox Sports is demanding I ask you to make a prediction.

Trump: I hate to make predictions.

O’Reilly. But you have to.

Trump: I hate to do it. I don’t even know what are the odds. I guess it’s pretty even, two great teams, pretty even, so I’ll say the Patriots will win.

O’Reilly: By how many points?

Trump: Shouldn’t be doing those things, but that’s OK.

O’Reilly: You don’t need data on that.

Trump: I need no data on that.

O’Reilly: Mr. President, thanks very much for taking the time.

Trump's interview is an action plan for anyone who wants to figure out how to resist his problematic policies. Trump himself has been critical of American leaders' tendency to give away plans to the enemy, but now he's doing the exact same thing himself. The transcript should give you some pointers to figure out how to protest objectionable components of his upcoming agenda, so read carefully and start strategizing.