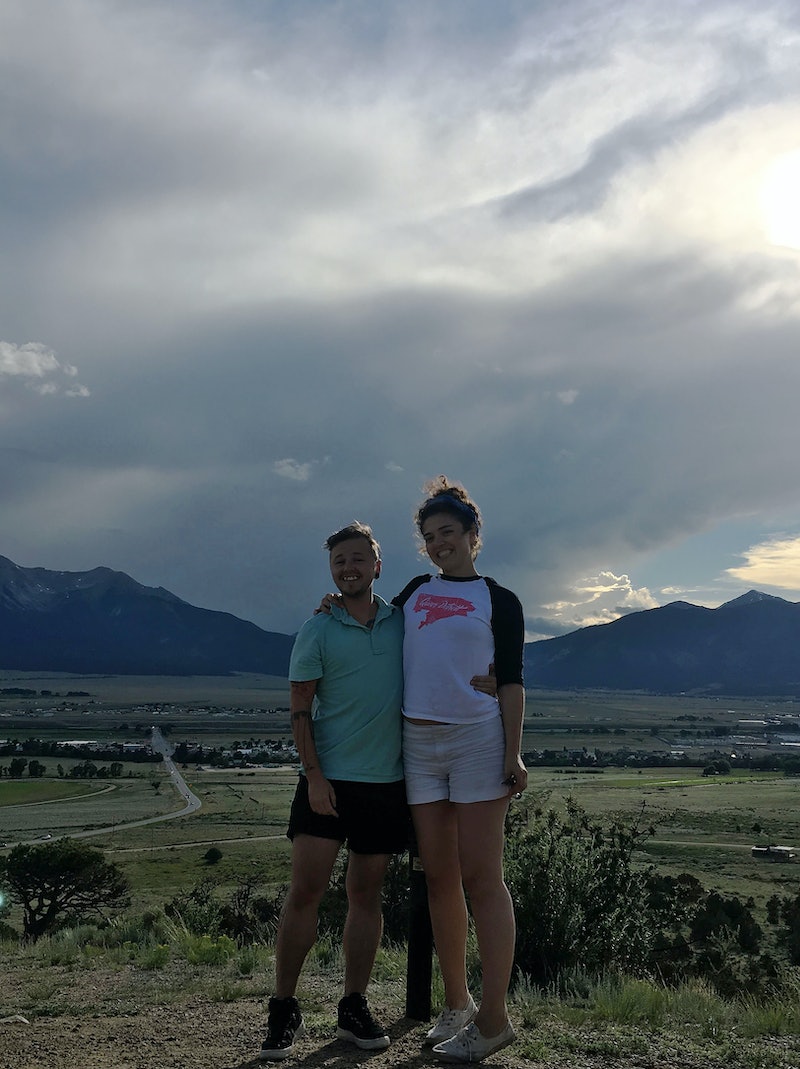 Last summer, as the presidential election was fulminating into its full form, two activists took to the road with a mission of giving a voice to transgender people people from all corners of the country. Basil Vaughn Soper and Johanna C. Case's project, called “Transilient,” is a photo and interview-based project that explores and shares the day-to-day lives of transgender and gender non-conforming people. It has the simply but powerful mission of humanizing trans people and fighting the fear and ignorance that afflicts the trans community.

"Transilient" was founded by Soper and Case as a way to push back against the lack of understanding that cisgendered people often have about people in the trans community. “We believed that something that could create a lot of change while simultaneously lifting up the community would be a photo project,” Soper tells Bustle.

Part of the motivation for the project came as a response to the “bathroom bill” passed in 2016 in North Carolina, where Soper grew up. “I’m from North Carolina originally and I transitioned in North Carolina,” Soper says. “I was an activist there and I ran an advocacy group in North Carolina for five years and so for me, we were living in New Orleans at the time and I was just devastated, because I’d given so much energy and passion. I felt like I was just a blip in time.”

They’d ask me, ‘Why are you a conventionally attractive person and you’re dating a trans person?’ Literally those words in front of Basil.

"Transilient" also aims to push back against reductive conceptions of trans people, especially in the media. Soper and Case, who are also a couple, were flummoxed by the questions they were asked.

“We started dating right before the Caitlin Jenner thing blew up. They interviewed us as a couple, and I’d heard from Basil about the kinds of questioning that went along with interviews by a cis interviewer, but it was insane to witness," Case recalls. "They’d ask me, ‘Why are you a conventionally attractive person and you’re dating a trans person?’ Literally those words in front of Basil. Let alone the crazy questioning about ‘what do your genitals look like?’ and things that under no other circumstances would you ever ask a cis person that.”

Soper says that many people who support anti-trans policies like the bathroom bills “just reduce people to their genitalia.” He argues that such reductive thinking contributes to the discrimination and stigma. “It’s a disturbing strange response,” Soper says. “I’m just like well, these people are behaving this way because they’ve never met a trans person.”

Case says, “We talk a lot about the difference between humanizing a community as opposed to normalizing or saying that assimilation is necessary. We’re trying to highlight people’s differences—”

“And their lives,” adds Soper. “That they live lives.”

A big component of the work was finding people to interview. Soper utilized social media, local press, and word-of-mouth to find subjects. “One woman in Arizona, who is Native American and lives on a reservation, had been in a beauty pageant, and that’s how I found her,” Soper says “She was listed as being in a beauty pageant as a trans contestant. I searched and searched and I found her and she invited us out and we met with her.”

One of the most profound moments of their trip was visiting the grave of Brandon Teena in Nebraska, the trans teenager who was murdered in 1993 and the subject of the film Boys Don’t Cry.

“That was really intense for me,” Soper says. “It was a really great reminder of where we’ve come from and where we’re going. We met so many beautiful, amazing trans people in Nebraska.”

Teena’s grave is incorrectly marked, referring to his birth name and gender. “I covered up his name with little flowers and made his name right,” Soper adds.

The more participants Case and Soper gathered for "Transilient," the easier it was to find others to join their mission. Case says, “Once we had enough of a body of work, and people could see the kind of work that were doing, and that our whole aim was to really be respectful and to make people feel affirmed and feel like whole human beings, we had a lot more engagement.”