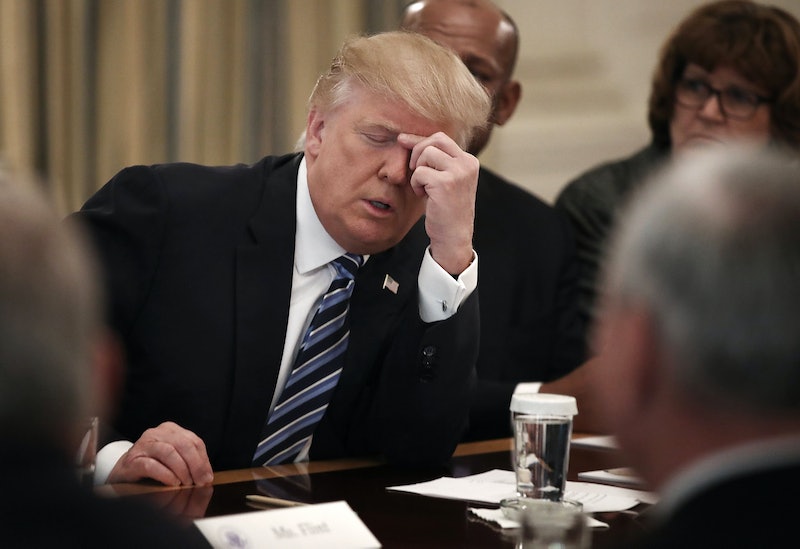 A few times this week, we've seen Republicans walk into seemingly ready-made traps. Take, for instance, when Mitch McConnell accidentally gave both Elizabeth Warren and the internet its collective "Nevertheless, She Persisted" rallying cry. Now, President Trump has walked into a meme-worthy trap of his own (as he often does), when he emphatically tweeted "SEE YOU IN COURT" in regards to the Ninth Circuit Court's ruling against his travel ban. It's too good of a moment to pass up, so Twitter (as it often does) has been sending Trump memes about his travel ban. Ah, the internet.

Trump's tweet in full reads: "SEE YOU IN COURT, THE SECURITY OF OUR NATION IS AT STAKE!" (Caps lock emphasis his own, of course.) Per the court's ruling, an earlier judge's restraining order on the controversial immigration order, which barred travel from seven predominantly Muslim countries, will remain in effect until its legality can be fully assessed. The judges unanimously concluded that putting a hold on the ban would not put the country in danger, though the decision will likely move to the Supreme Court.

The order has been largely unpopular since its onset, with multiple Democratic and Republican lawmakers joining against it in a rare moment of bipartisanship. So the internet, of course, had plenty to cheer about, and even more so with Trump's "SEE YOU IN COURT" declaration in mind.

Maybe He'll Get Bored Of Losing

The Big Boss Had Been Defeated

Everything Is Totally Fine, OK?

Now Arnold Can Say You're Fired

When You Fight The Law And It Wins

We Know Which Emotion Trump Is Right Now

A Classic Arthur, Of Course

A Live-Action Replay Of The Oval Office

This Face Says It All

It's Time For A Little Song And Dance

Keep Racking Up The Wins

It's Surely Going To Be A Classic Trumpian Move

Next Thing You Know, He'll Be Taking Off His Mask

Anything To Distract, Right?

Elle Woods Takes No Prisoners, Either

Surely, the internet will be blessed with plenty other meme-worthy moments. In fact, they're one of the best things to come out of the dumpster fire that is Trump's tweet. One thing is for sure: We can expect plenty of other "SEE YOU IN COURT" tweets from Trump.