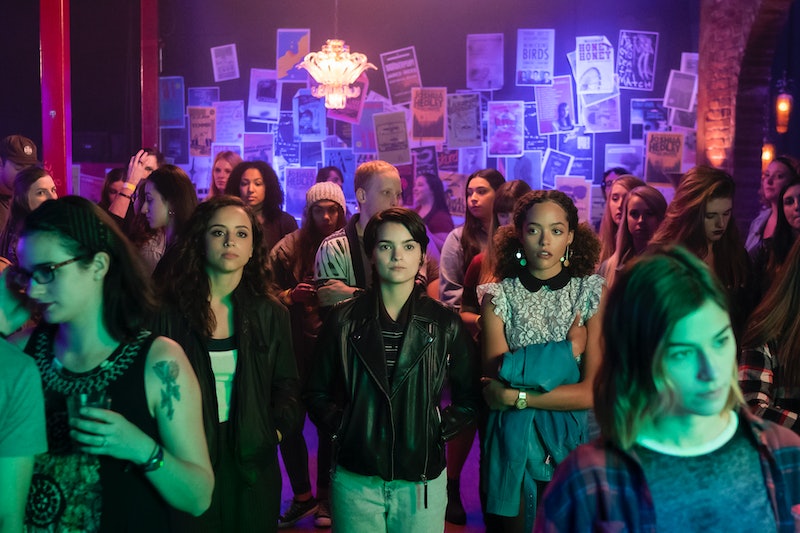 Since Netflix's Trinkets about teenagers, it only stands to reason that the music would reflect its main characters. Elodie (Brianna Hildebrand), Moe (Kiana Madeira), and Tabitha (Quintessa Swindell) are angsty kleptomaniacs whose paths cross during a Shopaholics Meeting. And while they initially don't get along, they soon realize how much they have in common. As such, the Trinkets soundtrack is filled with songs that are just as deep, moody, and creative as its protagonists are.

Between St. Vincent, the xx, Phoebe Bridgers, STRFKR, and Toro y Moi, indie fans will be happy to learn some of their favorite artists are featured in the show. There are also plenty of local bands (the show is set in Portland, after all), like Ages and Ages, Haley Heynderickx, Helio Sequence, and Black Belt Eagle Scout.

Several other west coast bands also make an appearance on the soundtrack, like L.A.'s Bleached, Evalyn, Warpaint, Empress Of, and Miya Folick, alongside the Seattle group Chastity Belt. The overarching genre is by and large indie rock, but there are a few outliers, like New York rapper Princess Nokia and London-based Ashnikko. So whatever kind of music you like, there's a little something for everyone. Here are some of the highlights.

This Portland-based electronic band has been around since 2007, according to their Spotify bio, and since then have produced hits like "Rawnald Gregory Erickson the Second," a "Girls Just Wanna Have Fun" cover, and "Open Your Eyes," among others.

Portland-based Katherine Paul performs under the name Black Belt Eagle Scout, releasing her first album, Mother of My Children, in 2018. The Native musician grew up on the Swinomish Indian Tribal Community in La Conner, Washington, according to an interview she did with Fader. "I grew up going to powwows and dancing; I was a jingle dress dancer," she told the outlet. "That was the type of music that I was surrounded with."

After Paul became a musician, she was in a band whose music didn't connect with her. "The songwriting was essentially by white people, and I was having a hard time having to explain myself, who I am as a person of color, as an Indigenous person, as a queer person," she said. Thankfully, she began writing her own music, and Black Belt Eagle Scout is the incredible result.

The Bronx-based rapper has two albums — 1992 Deluxe, released in 2017, and 2018's Metallic Butterfly. The musician speaks passionately about creating safe spaces for her fans. "Princess Nokia is about mistakes and celebration of community and acceptance of alternative people," she told the New York Times. "So [my] shows are a place of safety. They're a mecca, a sanctuary for all those people like me."

In addition to appearing in Trinkets as Elodie's love interest, the actor is a musician. The artist has two songs in the Netflix show's soundtrack — "Birds" and "The King of Shadow" — which she performs in her soft, airy voice.

"Trouble Adjusting" starts off unassuming enough — an acoustic guitar and Folick's sparse voice. However, the song soon crescendoes into a bona fide rock song. The L.A.-based singer is half-Russian and half-Japanese, according to Pitchfork, and she cites Björk as a major influence in her work. "There are few moments in my life that felt so obvious," she told the music site. "I'm a compulsive melody maker. If I hear a tone or a sound, like the hum of an elevator, my heart vibrates, and I have to sing. It sounds so cheesy, like something out of the Sound of Music, but it's when I feel most myself."

Chastity Belt was founded in Walla Walla, Washington and is comprised of Julia Shapiro, Lydia Lund, Annie Truscott, and Gretchen Grimm. Their album titles reveal their off-kilter sense of humor — 2013's No Regerts, 2015's Time to Go Home, and 2017's I Used to Spend So Much Time Alone. Their track "Different Now" is featured in Trinkets, where it fits right in.

The full Trinkets soundtrack is featured below, and includes a whopping 65 songs. And even if you can't pick the Future Islands bassist out from the crowd, you're sure to enjoy the lengthy, impeccably curated playlist.