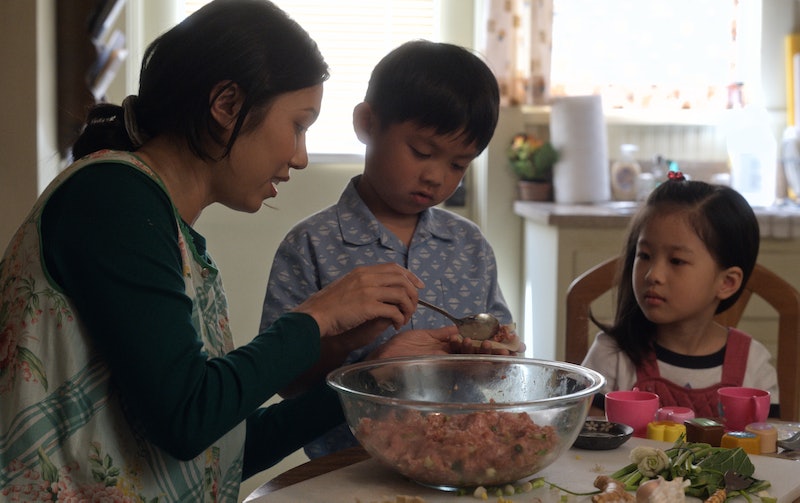 Although most of its offerings so far have been fictional dramas, the latest series from Apple TV+, Little America, is based on true stories. In January 2018, Epic magazine published a series of features on Americans from all walks of life. These moving stories served as the inspiration behind the new anthology series from Apple TV+ and is also being released as a book in March of this year.

Little America Season 1 contains eight episodes, each of which depicts a different American's story. The series is produced by spouses and The Big Sick writers Emily V. Gordon and Kumail Nanjiani, in addition to Lee Eisenberg and Epic founder Joshuah Bearman, among others.

"We sent our writers and researchers around the country to find these extraordinary tales from the lives of immigrants," Bearman said in a statement, per IndieWire. "What we discovered is that almost everyone has a little America story. These are slices of life we all share. And it was gratifying to be able to use these small stories to take on big ideas."

Here are the incredible true stories behind all but one episode of Little America, as they were written in Epic.

"I still remember the day, July 7, 2006, when they packed their bags," Kunal Sah (named Kabir in the show) told Epic, whose parents owned a Ramada Limited in Green River, Utah. "My mother and father had been fighting a deportation order they received in 2004, and their citizenship had been pending for 14 years. I was 11 years old. They were not being deported on the basis of criminal activity. They were being deported just because their citizenship application was in queue since 1990 and their time was up."

After his parents returned to India, Sah lived with his brother, who soon became abusive. Sah, however, had big plans for his life and decided to compete in the Scripps National Spelling Bee when he was in eighth grade. "I made it into the finals that year," he continued. "We went to the White House so they could film a segment to introduce the spellers, before the prime-time broadcasts." When his turn came to introduce himself to First Lady Laura Bush, he announced, "I am Kunal Sah, and I want my parents back. I really need some help. Please." He ended up coming in thirteenth in the spelling bee final, and his televised plea hadn't changed anything.

After a stint in juvie and foster care, Sah inherited the family hotel from his uncle, who was returning to India. So he learned to run the Ramada himself. Finally, however, the impossible happened. "In 2015, my dad calls and says, 'I got a letter from the United States Citizenship and Immigration Services. It has interview dates for me and your mother. December eighth,'" Sah recalled. "I couldn't speak."

His parents returned to the U.S. in January 2016, and they run their hotel together.

"The first time I played, I was 13 and undocumented," Reyna Pacheco told Epic, who is named Marisol in the Apple TV+ series. "There were 30 of us packed onto a court. My school rented squash courts at a private club in Mira Mesa, San Diego, and divided them up with a big makeshift wall. On one side tutors helped with homework; against the other, we hit balls and watched them bounce high and hang in the air."

Although she says she wasn't initially great at the sport, there was something about squash that attracted Pacheco. "I had to be aware, constantly pushing and perfecting and ready for my next shot," the athlete described. "This immediacy fit how I was living — at school where I didn't know if I'd be in the country for our next exam, and at home where we turned boxes into chairs and wondered when the next check would come in. I had to take it all day by day. Squash had a rhythm that matched my life."

She was coached by former Brazilian squash champion Renato Paiva, who encouraged her to keep at it. However, she was still undocumented and was thus unable to represent America internationally. Fortunately, she met an immigration lawyer once by chance, who took her on pro bono. "Now, I'm able to travel the world," Pacheco said.

This episode was based on a Nigerian-born man named Igwe Udeh, who left his home country to study economics at the University of Oklahoma. "I was the only black man in my program, and one of the few in town," Udeh told Epic. "I quickly learned that there was no barbershop in Norman that could cut black hair. I let my Afro grow. My accent was thick; to Okies, unintelligible."

Despite this, he noticed similarities between the Oklahoma cowboys and his Igbo tribe. "The Igbo spirit is tenacious, and we are deeply connected to our land, which is rich and full of oil," Udeh said. "I could see how much cowboys loved their land — they'd stay here forever.... They could not depend on the government, they could not depend on anyone else. Coming from Nigeria, where the government was never on my side, I could identify with that."

As a result, Udeh began dressing like a cowboy, which he said was easy because the thrift stores were filled with the western style. "The first time I walked into a classroom in my new cowboy getup, someone said, 'Look at that! Igwe wants to be a cowboy,'" he recalled. "I smiled and replied, 'Yes, I do.'"

In the early 1980s, a Swiss woman named Yemana Sanders (Sylviane in the series) attended a year-long silent retreat in Massachusetts. There, she met a man named Clark, with whom she had an instant connection. After the retreat ended, they moved in together and eventually had three children.

"But when the kids were grown, I needed to go off on my own again, to adventure again," she told Epic. "Clark and I parted ways. He is remarried now, and I am alone. Happy as a clam alone."

After Elizabeth Kizito (or Beatrice in the show) emigrated from Uganda to the States, she tried chocolate chip cookies for the first time. "I could not believe it!" she told Epic. "They were hot and fresh and so good. I liked them too much. The lady had to make some more because I couldn't stop. At that moment I decided, 'I have to make some cookies so I can eat as many as I can get my hands on.'"

Kizito continued baking cookies and eventually sold them for a profit where she lived in Louisville with her second husband. She was doing well, but her mother back in Uganda didn't understand. "When you come to America from Africa, your family wants you to be doing something really big, like working at a bank...something they can tell their friends about," Kizito said. "But selling stuff on the street? My mom was not happy about this. In Africa the people who do this type of work are the lowest — they are the women who have no money." Fortunately, Kizito's mother changed her mind when she came and visited Louisville, even encouraging her daughter to buy a storefront, which she did.

Kizito Cookies in located in Louisville, Kentucky, where she's known for carrying cookies in a basket on her head.

This is the only episode that doesn't seem to have been adapted from the Epic package. However, there is a similar story involving a Sri Lankan-American woman named Dilini Jayasuriya, who won a car by kissing it for 50 hours. "After the contest, I learned that my brother had put the TV on for my dad," she recalled. "He had watched the entire competition. 'I know it's a car,' he said, 'but I believed in you.' He was so proud that I stuck around. I always believed he thought I was weaker, but he was proud of me, and that was a big deal."

Farhad Gremipor (named Faraz in Little America) and his family had moved to the States from Iran so his kids could go to college. "Back home in Iran, having a house is very important," he explained to Epic. "It's different in America." So when Gremipor saw a real estate listing for $19,000 in Yonkers, he was shocked. "It should be $200,000!" he told the magazine. "I thought I'd found a deal like no one else has found. I went there to see and I found out there is this huge rock in the middle of the land. I mean, this thing is huge. It's like 8 feet high and maybe 50 to 60 or 70 feet long."

Eventually, Gremipor convinced a construction company to help him break up the stone for a discount. When the article was published, they hadn't gotten rid of the rock or built their house yet, but the Iranian man was determined. He explained that the house would have four bedrooms and a two-car garage. "[My wife] wants the very big bedroom and very big kitchen," Gremipor said. "Then we just have to nail the house to the rock. So the house will be on the rock. Actually, it's a nice foundation. We won't see the rock out the window at all. We will see a view of a beautiful green valley."

Shadi Ismail is from a Syrian town called Qardha, which he was forced to flee after his father caught him kissing a man. "He burned my arm and cut my hair, and said that if he ever caught me with a man again, he would kill me," Ismail said in his Epic profile. After escaping to Damascus, he became friends with an Iraqi man named Sam, who was also gay. They later moved to Jordan and eventually the U.S. At the time the article was published, both he and Sam lived in Boise, Idaho, and Ismail was engaged to a man named Ian.

Fortunately, Little America has been renewed for Season 2, so there are even more moving true stories on the way.

More like this
A Guide To All Of Zach Shallcross' 'Bachelor' Filming Locations
By Brad Witter
'The Catch' Revisits A Famed Irish Filming Spot From 'The Tudors'
By Darshita Goyal
The Plane Crash In 'Dear Edward' Is Based On A 2010 Tragedy
By Grace Wehniainen
Melanie Lynskey Plays A “Ruthless Leader” In 'The Last Of Us'
By Brad Witter
Get Even More From Bustle — Sign Up For The Newsletter
From hair trends to relationship advice, our daily newsletter has everything you need to sound like a person who’s on TikTok, even if you aren’t.