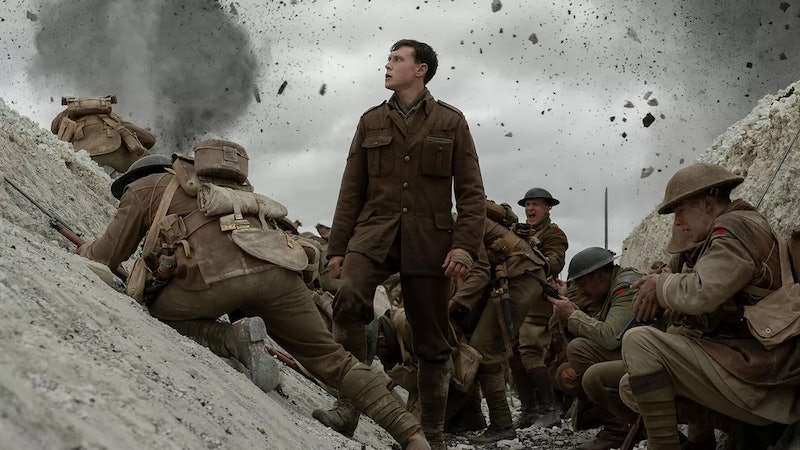 In Sam Mendes' 1917, two British soldiers in World War I sprint through the hellish maze of trench warfare and across no man's land to deliver an urgent message. It's a film full of technical marvels set against the backdrop of a very real war, but the particulars of 1917 are based on a true story even more specific than that. It turns out that the story is also part of Mendes' family history, though he didn't learn about the event that inspired his film until almost 60 years after it happened.

The film follows soldiers Blake (Dean-Charles Chapman) and Schofield (George MacKay) in real time after they're tasked with reaching the front lines to tell battalions they're walking into a German trap. If they fail, up to 1,600 men could die, including Blake's brother. If they succeed, well... they're still soldiers stuck in World War I — a war in which men died by the thousands to gain mere meters of land.

Mendes' grandfather Alfred Mendes was 17 when he enlisted in the war. Though he would later become a writer and novelist, Sam didn't hear the story of his time in the war until decades later, when Alfred was in his 70s and decided to open up about his teenage years in the war. "There was one particular story he told us of being tasked to carry a single message through no man's land in dusk in the winter of 1916... And that stayed with me," Mendes told NPR. "And that was the story I found I wanted to tell." Apparently, Alfred's small stature suited him perfectly for the dangerous task. "[Alfred] ran 5 and a half feet, and the mist used to hang at about 6 feet in no man's land, so he wasn't visible above the mist."

Alfred would later write an autobiography detailing the full history of his dangerous mission. It was 1917 during the Third Battle of Ypres, also known as the Battle of Passchendaele. Alfred was a member of C company, which along with A, B, and D companies, were sent to the area to maintain pressure against the crumbling German front. The Allied forces wanted to do so by pushing back at the German 4th Army, but rainy weather had turned the battlefield into its own form of hell. As Alfred put it, "The Ypres Salient was a marsh of mud and a killer of men... an area into which countless shells plunged destroying whatever tree, plant, bush, or grass there was and left behind a surface of moon-like desolation, many shell craters as traps for sucking in live men and drowning them — to this sector we came in 1917."

The change in landscape didn't change Allied leaders' plans at all, and all companies led an assault charge forward. It was a disaster. The expected counterattack never came and the charge failed, but worst of all, C company lost track of A, B, and D. The Battalion Advanced Report Centre needed data to plan any next moves. They sent a message: "Report on four companies urgently needed." Alfred's captain asked for one man to volunteer to run through the deadly battleground, make contact with each company, and return with the information. Alfred volunteered.

In his autobiography, Alfred noted, "the snipers got wind of me and their individual bullets were soon seeking me out, until I came to the comforting conclusion that they were so nonplussed at seeing a lone man wandering in circles about No Man’s Land...that they decided, out of perhaps a secret admiration for my nonchalance, to dispatch their bullets safely out of my way; or they have thought me plain crazy."

Amazingly, Alfred managed to make contact with all three companies and return to C company without injury, for which he was awarded a Military Medal. He also lived to tell the tale to an impressionable grandson, who turned his grandfather's nobly suicidal mission into a war movie capturing the experience.