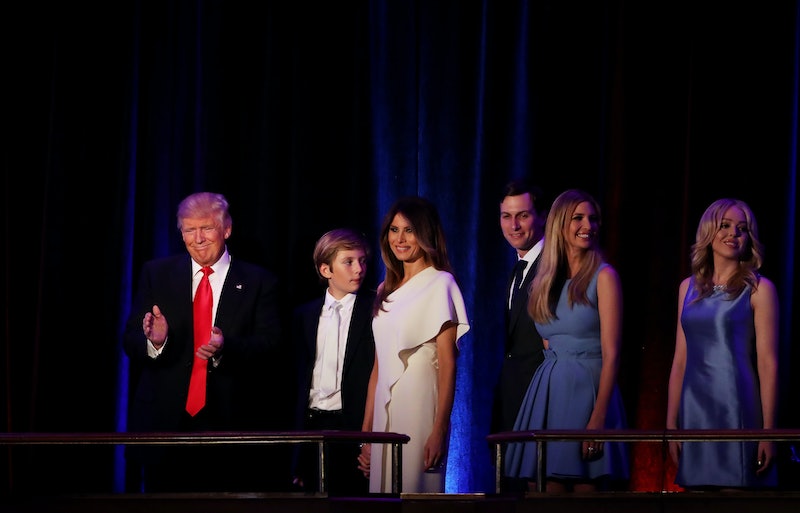 If you've ever wondered what Jared Kushner's Secret Service codename is, you can stop wondering: It's "Mechanic," according to government documents reviewed by Quartz. That seems rather arbitrary, given that Kushner isn't a mechanic and, by all indications, has never been one. But Kushner aside, some of the Trump family Secret Service names do make sense.

Donald Trump's codename, for instance, is "Mogul," according to CNN. Reasonable! After all, he was a real estate mogul before becoming president (and arguably still is). The Secret Service calls Donald Trump Jr. "Mountaineer," probably because he's an avid outdoorsman, while Eric Trump, a big game hunter, is known as "Marksman." And although Mike Pence isn't a member of the Trump family per se, his nickname is also logical, if perhaps a bit uncreative: The vice president is known as "Hoosier," according to CNN, which is also the nickname of his home state of Indiana.

Some of the family's nicknames are a bit harder to decipher. In addition to Kushner's "Mechanic" moniker, it's unclear why Ivanka Trump's codename is "Marvel," or why Melania Trump is known as "Muse." The nicknames for Trump's two youngest children, meanwhile, Barron and Tiffany, haven't been publicly reported.

In general, presidential candidates and their families are given Secret Service protection during their campaigns, and so their nicknames are usually decided upon before the election in question. According to presidential historian Michael Beschloss, protectees usually get to pick their nicknames from a list of options provided to them. Beschloss also says that after a presidential candidate is given a nickname, the rest of their family gets nicknames that begin with the same letter; this would partially, but not fully, explain why Kushner's nickname is "Mechanic."

In addition to the president, vice president and their families, some government officials get Secret Service codenames as well. Timothy Geithner, President Obama's first treasury secretary, was nicknamed "Fencing Master" during his time in the administration, according to the Atlantic. Former White House Press Secretary Scott McClellan told NPR that he was known as "Matrix" when he worked in the George W. Bush White House, and he also said that all press secretaries are given that name. Kellyanne Conway, currently a senior presidential adviser, has the Secret Service codename "Blueberry," according to New York Magazine.

Some past Secret Service names are genuine head-scratchers. Meghan McCain revealed in 2010 that when her father was running for president, her Secret Service codename was "Peter Sellers." Jimmy Carter reportedly had the nickname "Lock Master" at one point, while the Secret Service called former vice presidential candidate Joe Lieberman "Laser" during the 2000 campaign, according to Lieberman's wife.

Although the most well-known Secret Service codenames are those applied to people, the agency sometimes gives nicknames to locations and objects as well. According to the 2004 book How To Be President, the vice president's office is called "Cobweb," Air Force One is codenamed "Angel" and "Cowpuncher" (it's unclear why it has two nicknames), and the Pentagon's helipad is called "Playground," despite most definitely not being a playground.