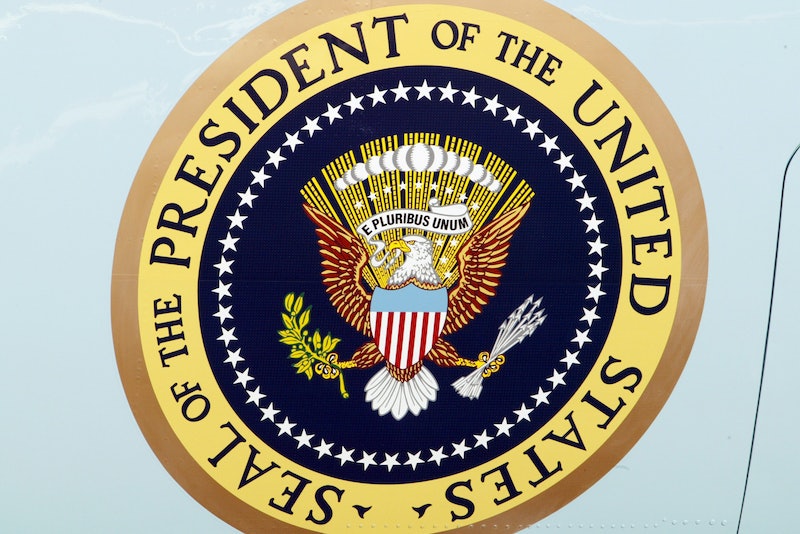 If you're unfamiliar with golf, tees are small stands used to prop up a golf ball at the start of a game, and it's common for tee markers on the green to indicate where golfers should place their tee. The sign and metalworking company Eagle Sign and Design told ProPublica it received an order for dozens of 12-inch replicas of the presidential seal, though it wouldn't say who ordered the tee markers. "We made the design, and the client confirmed the design,” said Eagle Sign owner Joseph E. Bates.

This would simply be a mundane detail about running golf courses if the tee markers featured anything else, but federal law prohibits the use of the presidential sale for commercial purposes. In fact, the Bush administration ordered The Onion to remove the presidential seal from its parody of Bush's weekly radio address, noting that the seal "is not to be used in connection with commercial ventures or products in any way that suggests presidential support or endorsement."

The federal law explicitly banning the use of the presidential seal for commercial reasons says "whoever knowingly displays any printed or other likeness of the great seal of the United States ... for the purpose of conveying, or in a manner reasonably calculated to convey, a false impression of sponsorship or approval by the Government," can be fined and/or spend up to six months in jail.

The White House’s 2005 letter to The Onion pointed out that exceptions are possible, but The Onion hadn't applied for any such exemption. It's unclear if the Trump Organization did, but an order form for the tee markers reviewed by ProPublica and WNYC said the customer Eagle Sign and Design mentioned was “Trump International.”

As ProPublica explains, the seal has been used by past administrations for reasons other than its governmental purpose:

"Versions of the seal have occasionally been put to personal use by past presidents. George W. Bush and Barack Obama had custom sets of golf balls made with the seal. Ronald and Nancy Reagan had a set of presidential china bearing the seal, and there have even been M&M’s and jelly beans that featured the seal."

The company has raised ethical questions ever since Trump kicked off his 2016 campaign, largely because he continued profiting off the Trump Organization's success. President Trump made $37 million from his Mar-a-Lago resort between January 2016 and April 2017, according to his 2017 financial disclosure. By comparison, Trump's 2016 disclosure reports $30 million from the same estate, and the 2015 report discloses $16 million.

Trump handed over control to his sons when he took office, but didn’t sell the family company. Because of alleged conflicts of interest, nearly 200 congressional Democrats sued Trump in June, accusing him of breaking the Constitution’s “foreign emoluments clause” that prohibits taking gifts from foreign leaders.

So, this certainly isn't the first time the Trump Organization's actions have come under legal scrutiny since Trump moved into the White House. But using the presidential seal as a golf course tee marker is blatant advertisement that the properties are owned by the president.