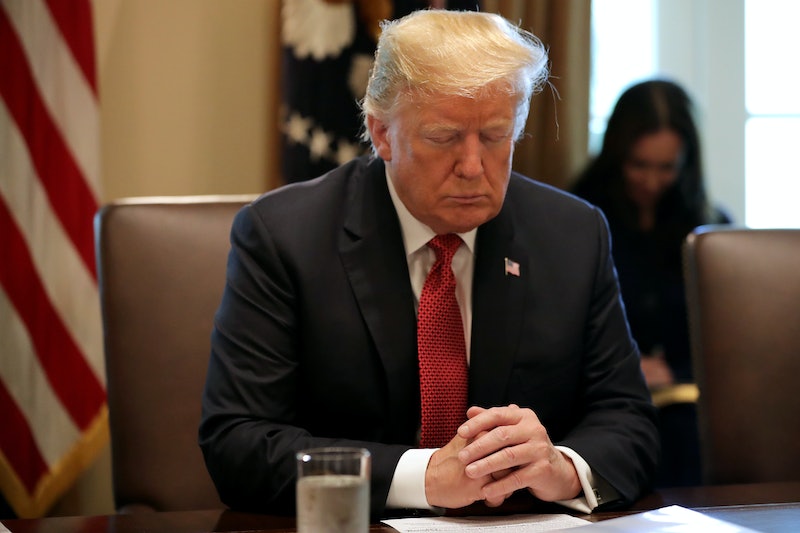 The president's name is about to be just a little bit less visible in New York City, as of this week. A "Trump Place" condo in Manhattan is removing POTUS' name after owners in the building voted to get rid of it. After Thursday, the Upper West Side building will simply be known by its address: 200 Riverside Boulevard. Bustle has reached out to the Eric Trump via the Trump Organization for comment.

This building isn't the only one to remove "Trump" insignia from the outside. The New York Times reports that out of the 15 "Trump"-adorned buildings in Manhattan in 2015, at least four of them having removed the sign, including Riverside Boulevard. But that doesn't mean it was a unanimous decision.

The New York Times reports that a formal poll of the building's residents taken earlier in October reflected nearly 70 percent approval of removing the sign. One resident, Linda Gottlieb, told The New York Times, “We were driven by our intense feelings about Trump himself. We would not have stayed in the building we felt so strongly about it. We just renewed our lease for two years.”

In direct contrast, another unidentified resident complained on an internal message board, "I am adamant that the sign should remain on the building. We bought in the building with it. There is no reason to take it down.”

Still another wrote, “Arguably, at one time the Trump name may have contributed something to the value of our apartments. That is clearly not the case today.”

Regardless of the division, the majority of the condo residents are getting what they want, albeit at a pretty steep cost: The New York Times reports that it will cost approximately $23,000 to remove the letters and clean the facade afterward.

In an email by the board of the building, as obtained by The Washington Post, the board wrote, “We are pleased to have resolved this matter democratically. Our entire community has engaged in a thorough and respectful deliberative process regarding how to address the signage on our building. We encourage everyone to move forward and respect the will of the community.”

The removal of POTUS' name from a building reflects just how polarizing his brand has become, especially in a city where his legacy is quite literally founded within the construction of buildings. Trump Tower is another symbol of that polarization: it is frequently the site of protests and demonstrations against the Trump administration. Still, The Washington Post reports that Trump's name can presently be seen from at least 40 buildings around the world, including two other Trump buildings on Riverside Boulevard.

Neither Trump, nor his son Eric, who is the executive vice president of the Trump Organization, have commented on the removal of the sign.

More like this
Prince William Condemns “Unacceptable” Comments Made To A Black Guest At Buckingham Palace
By Shahed Ezaydi
What Should You Put On Your Nails After Removing Acrylics?
By Isabella Sarlija
10 Organizations To Support On Latinx Women's Equal Pay Day
By Caroline Burke and Mia Mercado
Meet The Rugby World Cup Breakout Star Making The Sport More Inclusive
By Shahed Ezaydi
Get Even More From Bustle — Sign Up For The Newsletter