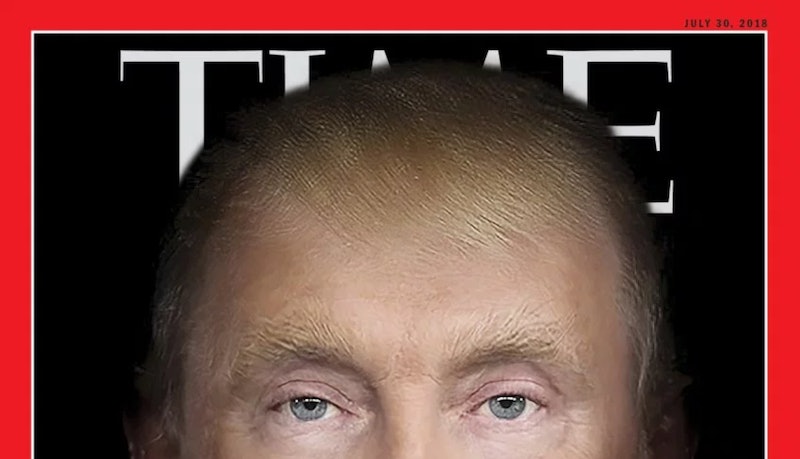 Donald Trump's press conference with Vladimir Putin earlier this week quickly generated controversy, with both Republicans and Democrats criticizing the president for defending the Russian leader. To further highlight this controversy, the TIME Trump and Putin cover morphs the two into the same person, reflecting Trump's decision to align himself with Putin over his country's own intelligence agencies.

On Monday, Trump hosted a bilateral summit with Putin in the Finnish capital of Helsinki. Following the summit, the two men participated in a press conference where Trump suggested that Russia did not interfere in the 2016 U.S. presidential election — despite American intelligence officials coming to the opposite conclusion. In fact, just days before the summit, Special Counsel Robert Mueller indicted 12 Russian intelligence officers, accusing them of interfering in the 2016 election and hacking into the networks of the Democratic National Committee.

Trump attempted to walk back these remarks following sharp criticism from liberals and conservatives alike, but as TIME's cover indicates, the damage had already been done. In the eyes of many American voters, Trump had effectively become Putin's puppet, making them one and the same as far as political motivations go.

In a statement, TIME explained that the cover image — which was designed by visual artist Nancy Burson — "is meant to represent this particular moment in U.S. foreign policy." And for Burson, merging Trump and Putin's faces was her way of providing "a different way for people to see what they couldn’t see before," according to the statement.

In addition to creating a still image of Trump and Putin's faces for the magazine's July 30 cover, Burson also created a video "which morphs between the shifting appearances of the two world leaders," TIME explained in its statement. This is the second time in recent weeks that TIME featured Trump on its cover. For its July 2 edition, TIME showed Trump looming over a sobbing immigrant child. The caption simply read, "Welcome to America." TIME also released a Trump cover back in January, which depicted the president screaming with his hair on fire. The artist who designed that cover, Edel Rodriguez, said it was an allusion to Michael Wolff's book, "Fire and Fury: Inside the Trump White House."

Per TIME's statement, Burson has been doing this type of work for decades. In the 1980s, Burson began working with MIT scientists to develop pioneering software that could digitally age faces. This, according to TIME, was the first time it was possible to generate such images based on more than guesswork. The FBI ultimately acquired Burson's software to digitally age the faces of people who had gone missing; by releasing these images to the public, they were reportedly able to locate numerous missing people.

Burson told TIME that she wants her art to "create answers to unasked questions," and to challenge existing perspectives.

“I think the best art can change people’s perception of how they see how they are as human beings,” Burson said. “Art makes everything possible and beyond.”

Many Twitter users responded to the cover by describing it as "creepy" and "terrifying" — especially because it seemed to come so close to reflecting reality.

The article accompanying TIME's statement on the cover release was the magazine's cover story from this week, in which Brian Bennett assessed "Trump’s puzzling affinity for Putin." In the article, Bennett described Trump's "posture toward Putin" as "baffling," and questioned why he refused to hold Putin accountable even as American intelligence officials attempted to do just that. Bennett also compared Trump's statement about holding "both countries responsible" for poor relations to his defense last summer of white nationalists in Charlottesville.