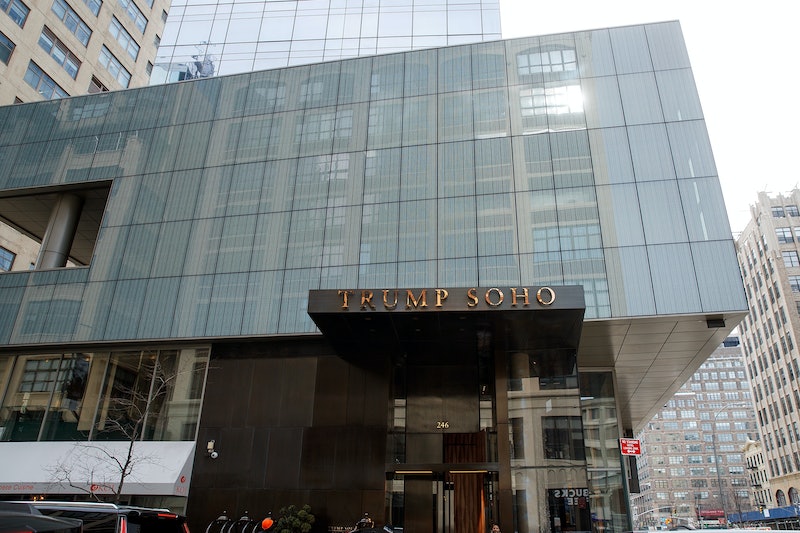 For years prior to becoming a political figure, President Donald Trump maintained his personal brand in two major ways: his career as a reality TV host, and his licensing out of the Trump family name to various businesses, including hotels. But now, amid a seemingly endless parade of controversies, scandals, and criticisms brought about by his presidential run and administration, the Trump organization is reportedly getting out of one of its biggest properties. In fact, the owner of the Trump SoHo hotel will reportedly pay the family to pull out of their deal to manage the business, and to remove the name from the building, prematurely terminating a contract that was reportedly scheduled to run for two more years.

The Trump Soho hotel, as The New York Times noted on Thursday, was first announced on an episode of Trump's show The Apprentice in 2006, touted as a lavish, luxurious hot-spot for visitors to New York City. It bears Trump's own name, and the Trump Organization is reportedly tasked with the day-to-day management of the property.

But now, the Trump Organization and the CIM Group, the owners of the hotel, are parting ways, with CIM buying out the remaining years of the deal. According to the Times, one harbinger of the collaboration coming to an end came in April, when the hotel's Japanese restaurant Koi shut down as business struggled. An attorney representing the restaurant reportedly blamed the flagging profits on Trump's controversial presidency, saying business had struggled since the election.

Also, as The Washington Post reported earlier this week, a significant part of the Trump SoHo's decline was due to the refusal of professional sports teams to continue patronizing the property. Trump as president has notoriously attacked several high-profile black athletes, perhaps most prominently castigating NFL players for kneeling or sitting during the national anthem, calling for them to be fired for their acts of protest.

That's seemingly had an impact on how willing pro sports teams are to stay at his locations, and how many individual athletes have criticized his presidency ― the NBA champion Golden State Warriors, for example, won't make the traditional champions' White House visit this year after Trump attacking star point guard Stephen Curry on Twitter.

Prior to the 2016 presidential election, it was clear that the Trump Organization was already taking steps to mitigate its namesake's increasingly controversial and inflammatory reputation. In Oct. 2016, it was first reported that a new line of Trump hotels would be launched conspicuously absent the Trump name, instead under the name "Scion."

This drew headlines for what a sea change it seemingly was ― historically, Trump has been extremely eager to splash his name wherever he can. But as he's become one of the most unpopular presidents in the history of American political polling, it seems as if the name is now as much a hindrance as a help.

The SoHo hotel was also central to some legal issues for the Trumps, as the president's children, Don Jr. and Ivanka, were reportedly almost indicted for alleged fraud back in 2012 over their communications with potential buyers of some of the building's unfilled condos. The case was ultimately dropped by Manhattan district attorney Cy Vance, however, who told ProPublica he "did not at the time believe beyond a reasonable doubt that a crime had been committed."

In short, anyone who frequents Manhattan's SoHo district in the weeks and months to come may soon notice one fewer building with the president's name on it. Thus far, Trump himself has not weighed in on the news, either in a formal capacity, or through his oft-inflammatory Twitter feed.

Despite the SoHo setback, however, the Trump name will continue to be plastered on a number of prominent buildings, perhaps most significantly in the nation's capital. As the Times noted in its report, profits have surged at the Trump International Hotel in Washington, D.C. since he took office, in no small part thanks to it becoming a hot-spot for GOP lobbyists, donors, and officials. Trump's frequent endorsements and ongoing ownership of his own properties while president has proven to be highly controversial in itself, with some critics insisting it amounts to a violation of the emoluments clause of the U.S. Constitution.