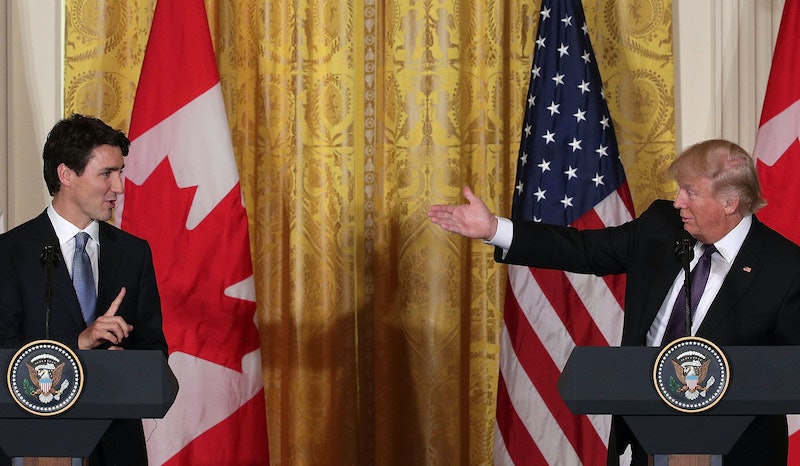 There was a glimmer of hope in February. President Trump and Canadian Prime Minister Justin Trudeau met for their first White House meeting, and out of that came a surprising new partnership: a U.S.–Canada task force dedicated to women in business. But more than two months later, there seems to have been little movement toward fulfilling the promises. Is it possible that the Trump-Trudeau "women's council" might have been fake?

The Canada-United States Council for Advancement of Women Entrepreneurs and Business Leaders (whew!) had a long name, but not a very long list of specific goals. Trump and Trudeau, along with Ivanka Trump, met with female CEOs from both countries on Feb. 13. During the roundtable, there were discussions on retaining female talent in the workplace, involving women in entrepreneurship, and childcare for working mothers.

The two leaders announced the CUSCAWEBL (!!!) after the roundtable concluded. It was a nice handshake photo op, but it also seemed like a possible turning point. After all, a man who had bragged about sexually assaulting women was meeting with a self-proclaimed feminist to talk about the role of women in economic development. The fact that this conversation had even happened was encouraging for many.

So did the White House immediately start a concentrated task force to start to jump on all of the problems identified in the round table? Did the Canadian government, which initially called the meeting, start drafting new legislation? Nope and nope. As Canadian journalist Anne Kingston put it, the task force seems to have "vaporized."

Writing for MacLean's, Kingston sought out to unearth any kind of follow-up to the February meeting. She was shuffled between several offices within the Canadian government, before finally being directed to the White House for answers. Her inquiries weren't addressed, and any information she could squeeze out of Canada broadly discussed plans for something in the works, but with no actual movement. That ultimately led to Kingston's conclusion that the whole thing was a bust.

Kingston detailed a lack of infrastructure and planning as the main culprit. It seems that, ultimately, the two countries talked a big game but had little to no idea how they would actually get anything done. "What is apparent is that having Trudeau and Trump bond over wealthy women in suits was a canny move," Kingston wrote. "As well as a distraction from overhanging NAFTA worries or the president’s self-stated proclivities as a sexual predator."

Woof. Hopefully, pointing out the lack of true follow-up here will produce results. Otherwise, the whole "caring about women in business" thing was ultimately a horse and pony show.

More like this
The Spice Girls & Adele Lead Girl Power Celebrations For Lionesses’ Euros Win
By Sophie McEvoy
The 3 Best Non-Iron Women's Shirts
By Rachel Cavanaugh
5 Pairs Of Women's Underwear That Prevent Chafing
By BDG Commerce
We’ve All Had Bad Sex. Nona Willis Aronowitz Is Talking About It.
By Sophia Benoit
Get Even More From Bustle — Sign Up For The Newsletter