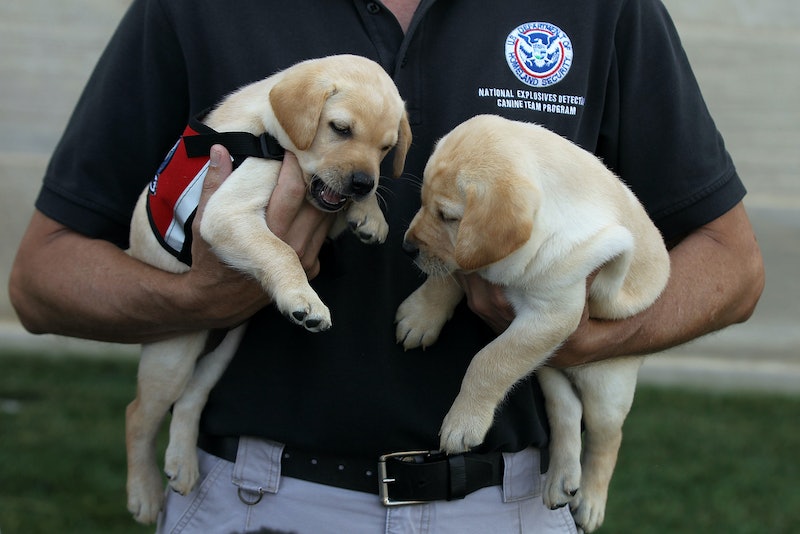 You probably never thought about following the Transportation Security Administration on Instagram. Hell, you probably never even thought about the Transportation Security Administration having an Instagram. But the TSA is doing its darnedest to get followers by using some classic Instagram bait. Yep, the TSA is posting pics of its dog employees on Instagram. These members of the Detection Canine Program aren't just protecting passengers, they're gettin' those likes.

As pointed out by Forbes, the pictures of the dogs raise awareness of the Explosives Detection Canine Program and also show what the dogs get up to in their time off. The dogs and their handlers participate in a 10 to 12 week training program together, depending on what type of detection they'll be doing. Three-hundred-and-fifty dogs complete the training each year, and seven breeds are allowed in the program: German Shepherds, Labrador Retrievers, German Short-haired Pointers, Wirehaired Pointers, Vizslas, Belgian Malinois, and Golden Retrievers.

Many of the dogs joining the program now have floppy ears, because they appear less scary to passengers, especially children fliers, the agency announced in January of this year. "Pointy-eared dogs can be a little ominous, a little intimidating — you generally see that with police dogs or tactical dogs," the TSA told People. "What we’re looking to do is employ more floppy-eared dogs because they’re just not as intimidating. They’re a little more inviting and welcoming." That said, you're still not supposed to pet the dogs, since they're busy at work.

If you want to just look at some dogs, though, the TSA Instagram has that covered. It also has a lot of other flight-risk related posts, so if you aren't looking to have confiscated knives and guns pop up on your feed — or bottles of rice wine with a snake and a scorpion in them — they might not be worth a follow. (Also, there's an almost uncomfortable amount of puns considering this is an official government agency, but to each their own, I guess.) Anyway, onward to the dogs!

This is Aussie from Houston, Texas. He works in William P. Hobby International Airport. And, yes, has floppy ears that are the ideal amount of intimidating.

This guy is Wajor, he works at Philadelphia International Airport, and he has unknowingly been made part of a Star Wars joke.

Felton and Buddy get their sniff on at Austin-Bergstrom International Airport in Texas. They also celebrated Christmas with goofy headbands just like unemployed dogs everywhere.

Marley, from Atlanta, might be playing with a rope here, but still don't pet them!!

Csoki is a Vizsla from Boston, and — at least at the time this Instagram was posted in March 2018 — he was the oldest TSA certified explosives detection canine.

This are just a selection of the dogs the TSA has tried to use to win people over. And, if it worked, you'll be glad to know that the organization also has a dog adoption program. Some of the dogs that go up for adoption are retired, but most are ones that did not pass the training required to join the Detection Canine Program. Either way, these dogs have stories to tell. There are a lot of requirements to be able to adopt one of the dogs, including having a fenced-in yard and being able to pick up the dog in San Antonio, Texas, with the possibility that you may need to go more than once.

So, yeah, you might just want to look at these dogs online for now. And whoever is doing the TSA's social media seems very willing to keep the dog pics coming.

More like this
Why Everyone Is "Soft Tagging" Friends On Instagram Right Now
By Alexis Morillo
Why TikTok Is Flooded With Controversial Videos About "Pick Me Girls"
By Courtney Young
This TikTok Song About An Unrequited Romance Has FYPs In Shambles
By Emma Carey
19 Latinx Therapists & Mental Health Experts To Follow On Instagram
By Kaitlyn Wylde, Naydeline Mejia and Lexi Inks
Get Even More From Bustle — Sign Up For The Newsletter