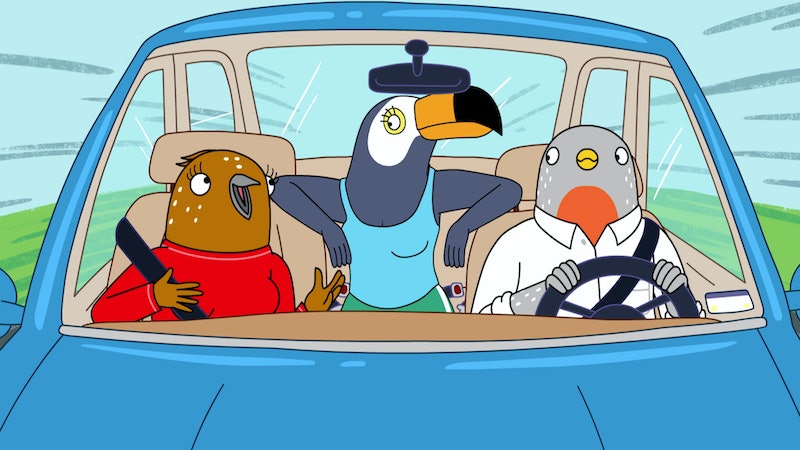 If you've been looking to fill the Broad City-shaped hole in your heart, Netflix might have your new favorite series about women and friendship. Tiffany Haddish and Ali Wong star as a pair of BFFs up to hilarious shenanigans in the Tuca & Bertie trailer — the catch being that they're a pair of cartoon birds.

As the trailer shows, Tuca and Bertie are aviary pals whose opposite personalities seem to complement each other (much like Abbi and Ilana on Broad City did). Haddish' toucan character, Tuca, is confident and fearless, while Wong's songbird, Bertie, is more cautious in her decision-making.

In the trailer, Tuca builds her friend up, complimenting Bertie on wearing a romper that's "impossible to pee in," because in this universe, birds have the same anatomy as humans. And Bertie keeps some of Tuca's more impulsive decisions in check, expressing concern when Tuca reveals her new pet jaguar. (The animals aren't true to size in this universe, but the jaguar is still big enough to eat them, if it wanted to.)

Tuca and Bertie are also going through some friendship and life changes that viewers will definitely relate to. There's a scene where Bertie's boyfriend, played by Steven Yeun, jokes about the two of them talking about him when he leaves that's all too real. And there's a point when Tuca suggests that Bertie doesn't want to have as much fun as they used to, hinting at potential tension between them now that they're getting older and Bertie is settling into a more serious relationship.

Aside from the heartwarming, friendship-heavy plot, the list of supporting voice actors and guest stars might also convince viewers to check out the new show. Tessa Thompson, Nicole Byer, Richard E. Grant, Tig Notaro, and John Early are all set to appear on Tuca & Bertie's first season, Deadline reported. And if the show's animation style looks familiar, that's not a coincidence. Cartoonist Lisa Hanawalt created Tuca & Bertie, and fans will recognize her work as a Bojack Horseman producer.

After her movie-making turn as Queen Watevra in The Lego Movie 2: The Second Part, it's nice to see that Haddish is doing more voice work, because she really is great at it. (She'll also appear in The Secret Life of Pets 2 in June.) And Wong's standup specials have earned plenty of critical acclaim, so she's the perfect comedian to join Haddish in the new show.

And while the show looks like it will deliver plenty of laughs, it sounds like it will touch on real-life issues, too. According to Entertainment Weekly, Tuca & Bertie will feature a workplace harassment storyline, too. So it's not all fun and games for the high-flying duo.

Tuca & Bertie hits Netflix on May 3. The series really does look like a feel-good, fun time. So if you're looking for a light-hearted show to binge next month, the new series could be the perfect option. And at just 10 episodes, it's also the perfect length for a weekend binge-watch.

More like this
What’s New On Netflix: 'Never Have I Ever' & 'Indian Matchmaking' Return
By Arya Roshanian
'The Sandman’s Ending Is A Departure From Neil Gaiman’s Comic Book Series
By Kadin Burnett
Netflix Just Rebooted A Classic ‘90s High School Drama
By Maxine Harrison
The 'First Kill' Cast & Fans Are Disappointed Over The Show’s Cancellation
By Brad Witter and Sophia Moore
Get Even More From Bustle — Sign Up For The Newsletter