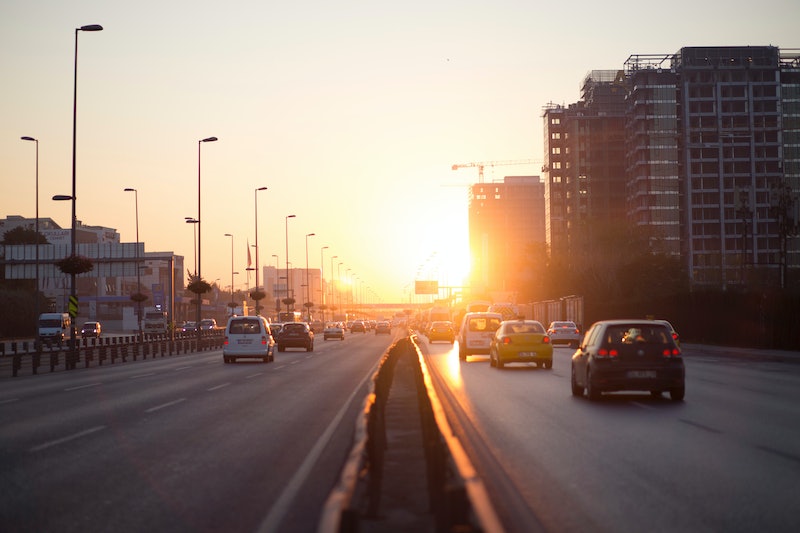 All relationships have their ups and downs, but this Uber Bae story on Twitter is definitely full of twists you won't see coming. An Uber driver who goes by the Twitter handle @Msixelaa hit up Twitter following an incident she says happened when she unassumingly picked up a woman from the airport... who allegedly turned out to be there for a ~romantic visit~ with — wait for it — @Msixelaa's boyfriend. @Msixelaa shared the whole story on Twitter... and it's a good one. "I shared a tweet out of anger. ... I've never been detailed and to the point like this time. My mood and energy [were] different than any other time," she tells Bustle.

The story all unfolded for the world to enjoy on March 27, and boy was it a good one. It started off like a normal day — according to @Msixelaa, she started working her shift for Uber, and picked up a passenger from the airport who allegedly claimed she was visiting her boyfriend. They chatted and exchanged stories just like any driver and passenger would during a normal Uber ride. The passenger, according to @Msixelaa, even took a water and borrowed the AUX cord — all normal.

Nothing seemed weird, until @Msixelaa claims they pulled into a familiar apartment complex. Tragedy struck. I don't want to reveal too many spoilers, because I really think the story should unfold organically as you read it, but trust me when I say it has more plot twists than Game of Thrones. "This was just a mess that people couldn't wait to hear," she tells Bustle.

Here are a few of @Msixelaa's tweets about what she says allegedly went down. You can check out the whole account over at her Twitter page.

@Msixelaa tells Bustle she didn't have any suspicions when she first picked up the woman, and was surprised to find out that her boyfriend hadn't left to go visit his mother like he said he was. "I actually felt dumb that I wasn't asking more questions, but what are the odds of this happening?" she says.

Of course, the internet went wild for this story — GIFs and memes soon followed when the thread went viral.

People seriously couldn't believe her boyfriend had been caught like this — though TBF it is pretty shocking.

It didn't take long for Uber Bae to become a Twitter sensation.

Since taking her story to Twitter, @Msixelaa says she's received a ton of support from other women who have found themselves in a similar situation. "Everything has been positive," she tells Bustle. "A lot of women have shared their experiences, and I talked to a lot of girls going through the same thing."

One lesson we can learn from all of this? You may be way closer than you think to your Uber driver.

More like this
Ashamed Of Your Screen Time Stats? Here's How To Change That
By Alexis Morillo
Learning To Love, Not Judge, The Lunchbox Wives Of TikTok
By Esther Zuckerman
Here’s What TikTok's "Mascara” Trend Is *Really* About
By El Hunt
21 Galentine’s Day Memes To Celebrate Your Best Friends
By Meghan Bassett and Mia Mercado
Get Even More From Bustle — Sign Up For The Newsletter
From hair trends to relationship advice, our daily newsletter has everything you need to sound like a person who’s on TikTok, even if you aren’t.