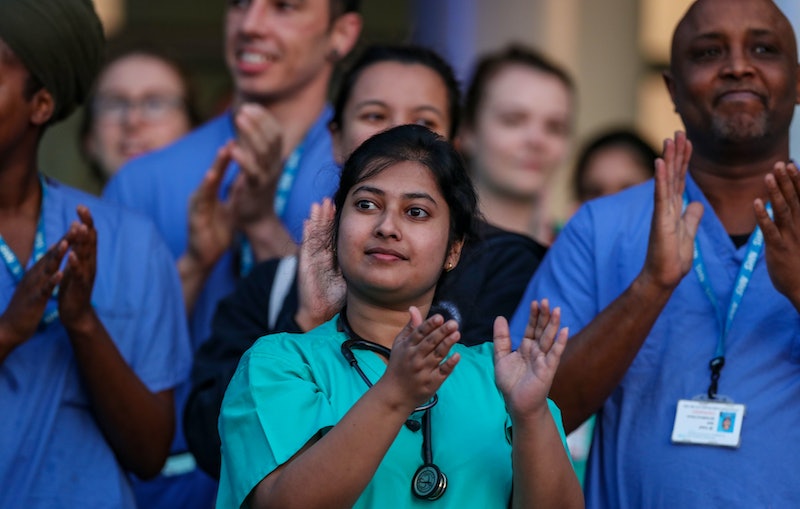 With more than 240,000 people said to have tested positive for COVID-19 in the UK, a common narrative from government officials is that the coronavirus does not discriminate. Yet as world leaders and scientists rush to learn more about the virus to help save lives, the UK government has been urged to investigate why people who are Black, Asian, or from another ethnic minority group (BAME) are being disproportionately affected by the coronavirus.

What we know so far

This issue first came to light in early April when a study from the Intensive Care National Audit and Research Centre revealed that, of the 2,000 patients critically ill with the virus in England, Wales, and Northern Ireland, 35% were BAME. This is despite the fact ethnic minorities make up only 14% of the UK population.

It's also been noted that the first 10 doctors to die in the UK from COVID-19 were all from black, Asian, and minority ethnic (BAME) backgrounds, including Dr Amged El-Hawrani, a consultant at Queen’s Hospital in Burton, who was the first frontline medic to die after testing positive for the virus. Further statistics published by Sky News on April 16 revealed that 70% of the frontline health and social care workers who had died from coronavirus were BAME.

Concerns escalated after a study published by the UK’s Office for National Statistics (ONS) on Thursday May 1 confirmed that black men are 4.2 times more likely to die from coronavirus than their white counterparts and black women are 4.3 times more likely, when age is taken into account. People of Bangladeshi and Pakistani, Indian, and mixed ethnicities "also had statistically significant raised risk of death involving COVID-19 compared with those of White ethnicity."

In response to these findings, Shadow Justice Secretary David Lammy said the figures were "appalling". Lammy tweeted: "It is urgent the causes of this disproportionality are investigated. Action must be taken to protect black men and women – as well as people from all backgrounds – from the virus."

Similar data has been recorded in the U.S. In Chicago, for example, “black people accounted for 72% of deaths from COVID-19 complications and 52% of positive tests, despite making up only 30% of the population," reports Sky News.

What has the UK government & the NHS said in response?

On April 16, Downing Street announced that they would be launching an official inquiry into the disproportionate impact of coronavirus on BAME communities. Speaking to a Sky News reporter about the statistics they had uncovered around this issue, Foreign Secretary Dominic Raab said: "This virus doesn't discriminate but we want to follow analysis of the data that you've described."

During the same press briefing, Chief Medical Officer Professor Chris Whitty said that while it was clear age, gender, and underlying health problems were clear risk factors for coronavirus, "being a member of an ethnic minority group is less clear."

He continued: "I've had discussions with scientists about this in terms of trying to tease this apart today. Also, looking very specifically at healthcare workers with leaders of the NHS. This is something we're very keen to get extremely clear. We've asked Public Health England to look at this in some detail and then what we really want, if we see any signal at all, we want to then know what next to do about it to minimise risk."

In late April, the NHS made a move to protect and reassure its BAME workers. In a nine-page letter sent on April 29 to hospital trusts, providers of mental health care, ambulance services and organisations providing community-based healthcare, NHS improvement’s chief operating officer, Amanda Pritchard asked that BAME personnel be “risk-assessed” and reassigned to duties that carry less threat in terms of coronavirus.

In an open letter to BAME staff on April 24, Peter Lewis, the chief executive of Somerset NHS Foundation Trust, shared similar sentiments and outlined the steps it would be taking to protect the health and jobs of those most vulnerable. “Your wellbeing is very important,” he wrote. “We have heard that many BAME colleagues are understandably worried about their own and their families’ health at this time.”

Has any reasoning been put forward to explain the statistics?

Factors such as socio-economic status, place of residence, and the high number of BAME public-facing key workers including NHS staff have been considered as potential reasons for the worrying trend. Yet, as the ONS report stated, "a remaining part of the difference has not yet been explained." They have said they plan to “conduct further work” to try and explain their findings.

Speaking to the Guardian on April 22, Wasim Hanif, a professor of diabetes and endocrinology at University Hospital Birmingham, said: “There have been health inequalities that have existed in the [BAME] population but what is being reflected in this pandemic is that those inequalities are actually coming out.”

How do BAME frontline workers feel?

Between the alarming death rates and poor access to personal protective equipment, over two-thirds of BAME frontline workers are said to be worried about contracting coronavirus in the course of their work. A survey published by the Royal College of Physicians (RCP) on May 18 found that “48% of all doctors who responded to its survey were either concerned or very concerned for their health, a figure that rose to 76% among BAME doctors.” The findings also revealed BAME doctors were worried about bringing the virus home.

“Concern is very high among BAME doctors and we should not be surprised given the awful situation we’ve had with the deaths of healthcare workers and people in social care from BAME backgrounds,” says Professor Andrew Goddard, president of the RCP, to the Guardian. “The fact that we’re so reliant on the BAME workforce in the NHS and social care, and the fact that the workforce is so worried about their health, is something we need to wake up to,” he added.

For those who are BAME, these reports are a cause for concern. It's clear that the faster it can be confirmed what's behind the racial disparities in the impact of coronavirus, the better.