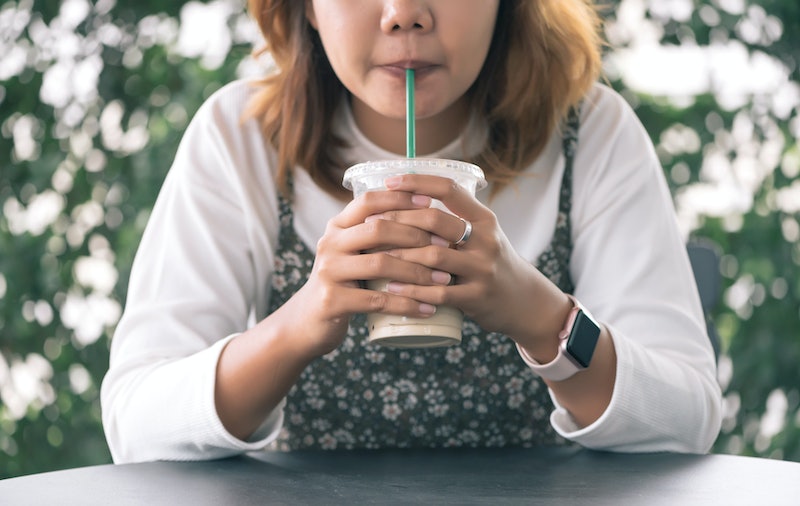 According to Forbes, UK Prime Minister Theresa May announced a proposal to ban plastic straws and other single-use plastics during a meeting with Commonwealth nations in April 2018. The ban on plastic drinking straws comes as part of the country's larger plan to decrease (and, hopefully, eliminate) plastic waste in the coming decades. As soon as early 2019, plastic straws and other items like Q-tips could be a thing of the past in the United Kingdom. Since Forbes notes that there are an estimated 8.5 billion straws thrown away annually in the UK alone (and, of course, you can't recycle them), this is a pretty big deal.

This isn't the first step the UK has taken to address issues of plastic waste. According to Forbes, the country has already implemented a charge on plastic bags and a ban on microbeads. Notably, the plastic bag charge has reduced the use of single-use plastic bags by 90 percent (the equivalent of a whopping nine billion grocery bags). Incentivizing environmentally friendly practices — and banning wasteful products like plastic straws — is expected to cut back on the UK government's estimate of "over 150 million tonnes [sic] of plastic in the world's oceans," according to Forbes.

Naturally, the proposed straw ban has plenty of stakeholders outside of the government, not the least of which is the fast food industry. Delish reports that McDonald's will lead the charge in cutting back on plastic straws. As of May 2018, the restaurant giant's UK locations will begin testing a biodegradable paper equivalent. In addition to being made from greener materials, the new Mickey D's straws will be kept behind the counter so that customers will need to ask for one proactively — rather than being handed a few with every drink. Changes like this will likely continue worldwide as "part of McDonald's global strategy to make all guest packaging come from renewable, recycled, or certified sources by 2025," per Delish.

Private citizens may also be affected by the straw ban. In the early stages of the UK straw ban, the BBC reported on its potential implications for the disabled community. As British businesses began kicking plastic straws to the curb, many disbaled individuals worried about their ability to continue to drink independently. Stainless steel or glass alternatives are not always suitable or safe for disabled people, the BBC notes, and they're not as readily available as the plastic counterparts that many people rely on when they need a drink. Paper or biodegradable alternatives don't often hold up when exposed to hot beverages, as well.

"The anti-plastic straw debate has enraged me because it has been one-sided," Rosaleen Moriarty-Simmonds told the BBC. "No one has consulted disabled people. A significant number of us rely on the humble plastic straw to be able to drink a glass of water, wine, or a cup of coffee."

While the potential environmental impacts are important, these concerns from the disabled community also need to be taken into account. Making more eco-friendly products widely available to the people who need them might serve as an ideal compromise, but only time will tell how widely they can be distributed in advance of the UK's ban taking effect in.

If you want to make a dent in the plastic wastage issue in your own, non-UK-based life, there are a ton of green alternatives. Stainless steel and glass drinking straws are reusable, washable, and come in different sizes so you can use them for drinks of different consistences (milkshakes, anyone?). Best of all, they serve the exact same purpose as their plastic brothers... and have a lot smaller of an environmental impact.