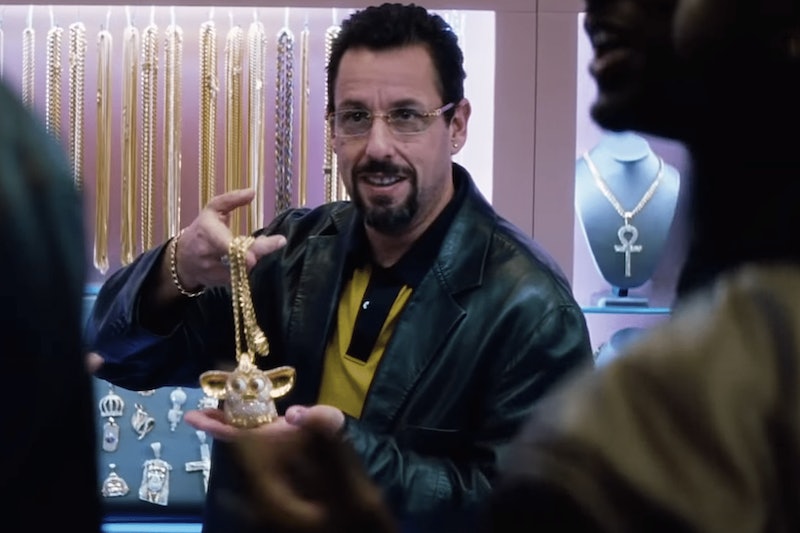 The Safdie brothers' latest film Uncut Gems is a narrow but deep window into New York's Diamond District circa 2012, where insane amounts of wealth is exchanged on a handshake and debts become personal. The elegant electronic soundtrack underscores and balances the high-wire tension of the film, as Adam Sandler's character Howard Ratner runs around the city pushing debt deadlines and relationships of all kinds to dangerous extremes, all while testing his own luck by doubling down on bad decisions and gambling on long shots. If this all sounds thrillingly stressful to you and you'd like to run around New York City pretending you're losing bets and desperate for money, then the Uncut Gems soundtrack is the perfect accompaniment.

WARP Records is releasing Daniel Lopatin's Uncut Gems soundtrack on vinyl, CD, and three digital formats, all of which you can buy now. In addition, you can stream the OST now on Spotify and Apple Music.

Unlike Lopatin's deeply stress-inducing electronic score to the Safdie brothers' previous film Good Time, his music for Uncut Gems creates a darker, more lush sound to accompany Ratner's gonzo journey through New York City. "I think it was kind of an organic continuation of Good Time, Lopatin told Awards Circuit of the Uncut Gems score. "I was really curious about expanding it to a bigger ensemble so it doesn't really feel like it's one person and their synth-type score. And we ended up doing that in our own way anyway. But the initial impulse was to do a '70s-style orchestral score with all these other accoutrements."

Though the final version of the original soundtrack is the work of Lopatin alone, there was almost a big collaboration. Abel Tesfaye, aka The Weeknd, makes a cameo appearance as himself in the film, portraying key point in his own past and even performing a live version of "The Morning" to a crowded, ecstatic room in a giant club. But despite recording four to five new songs with Lopatin, the Safdies and Weeknd ultimately decided Uncut Gems should capture 2012 as it was, not as it could have been. Loptain's score does just that — encapsulating the feeling of wonder that comes from holding a glittering diamond and the claustrophobia of being buried in a mountain of debt.

Uncut Gems hits theaters December 13, with a wider release on the 25th.

More like this
Austin Butler Recalls Lisa Marie Presley Showing Him Elvis’ Bedroom
By Jake Viswanath
You’ll Definitely Recognise Isadóra Bjarkardóttir Barney’s Mum
By Maxine Harrison
Lisa Marie Presley's Secret Granddaughter Was Revealed At Her Funeral Out Of Nowhere
By Jake Viswanath
Jennifer Coolidge Recites “Jenny From The Block” Beside J.Lo In Her First TikTok
By Jake Viswanath
Get Even More From Bustle — Sign Up For The Newsletter
From hair trends to relationship advice, our daily newsletter has everything you need to sound like a person who’s on TikTok, even if you aren’t.