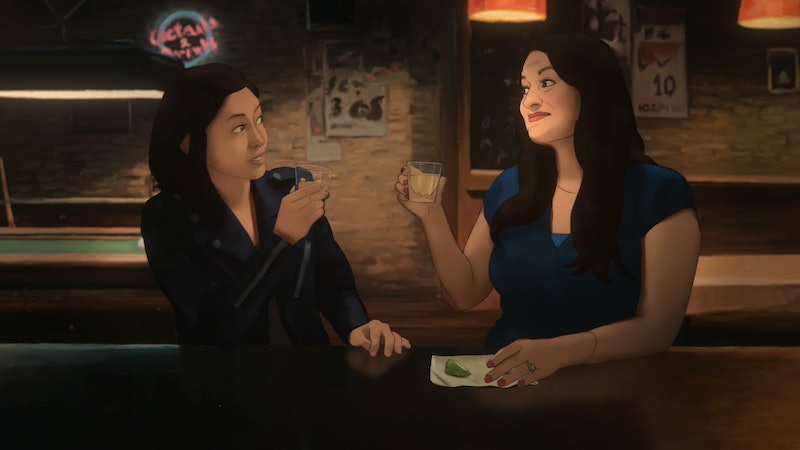 Not to be confused with the Weezer song, Undone is a new Amazon Prime Series, created by BoJack Horseman mastermind Raphael Bob-Waksberg and Kate Purdy. The series premieres Friday, Sept. 13 and follows a character named Alma Winograd-Diaz (Rosa Salazar), who becomes unstuck in time after a traumatic car accident. And while the show is animated, audiences will still be able to recognize the Undone cast.

More specifically, the show is animated through rotoscoping, per the New York Times, and is accomplished by filming live action footage before animating over top. The Times cites Richard Linklater movies like 2001's Waking Life and the 2006 A Scanner Darkly for popularizing the technique, but it's still a fairly new field. Rotoscope animation on Undone was accomplished with the help of the Dutch illustrator Hisko Hulsing, whose animated films include Harry Rents a Room, Junkyard, and Seventeen.

"Frame by frame, the [Undone] animators do line drawings of each of the characters. When they're done it looks like a coloring book," series co-creator Kate Purdy told the New York Post. "So [the pages are] white with all the actors outlined, and they decide which facial expressions best capture the emotionality. Once they've done that work, the footage goes to our studio in Amsterdam and those [animated] performances are hand-painted onto oil-painting backgrounds."

It sounds like grueling, painstaking work, but the results are both gorgeous and avant-garde while still keeping its cast recognizable. Here are the castmembers who brought these pseudo-illustrated characters to life.

More like this
How Much Are The 'Schitt’s Creek' Stars Worth?
By Hugh McIntyre
‘SNL’ Finally Spoofed Nicole Kidman’s Weirdly Beloved AMC Ad & Nailed It
By Stephanie Topacio Long
Jonathan Bailey’s BTS ‘Bridgerton’ Photos Celebrate 6 Months Of “Kanthony”
By Stephanie Topacio Long
The ‘Ted Lasso’ Cast Singing Along To “Sweet Caroline” Is Pure Gold
By Sam Ramsden
Get Even More From Bustle — Sign Up For The Newsletter