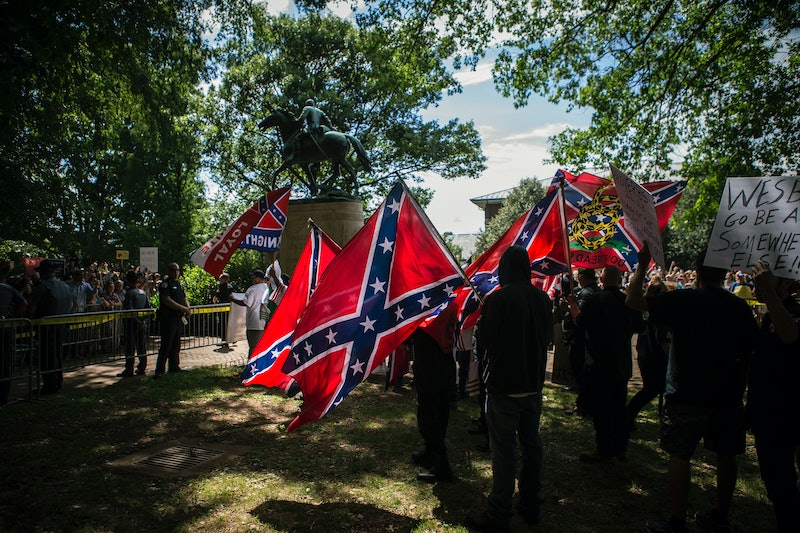 On Friday, hundreds of members of the "alt-right" and groups like the Ku Klux Klan marched around the University of Virginia campus carrying torches and chanting white supremacist phrases. The demonstration was apparently meant to lead up to a Saturday "Unite the Right" rally at Emancipation Park in Charlottesville. U.S. District Judge Glen Conrad ruled in favor of the event on Friday.

Clashes between marchers and counter-protesters reportedly turned violent on Friday, with "Unite the Right" supporters encircling and attacking a group of protesters who'd surrounded a statue of Thomas Jefferson by swinging torches and spraying lighter fluid and pepper spray. Fights also broke out among the crowds.

Virginia Gov. Terry McAuliffe released a statement on Saturday urging his constituents to stay away from the planned rally. He revealed that the state police, the National Guard, the Department of Emergency Management, and public safety officials from his cabinet would be on standby in preparation for Saturday's event. The governor additionally defended the rights of those planning to demonstrate, despite how "abhorrent" others, including himself, may find their views.

Videos and images of the Friday night situation at the University of Virginia campus quickly spread on social media, making the "Unite the Right" rally one of the most-discussed topics online on Saturday morning. Here is how some reacted to the news of the rally.

Despite his frequent use of Twitter, the president had notably not said anything about Friday's events by Saturday morning.

Many wondered how conservative media would present the Unite the Right rally in comparison to Black Lives Matter demonstrations.

Exactly what disadvantages the crowd pictured above feels it faces is one worth asking.

Despite witnessing violence against counter-protesters, law enforcement officials have taken little to no physical force against those perpetrating it.

This officer must have a lot to say.

President Trump's silence multiplies the awfulness of this endorsement.

8. He Really Needs To Say Something

Members of Congress can't help but be disgusted too.

Maybe now HBO will understand the outrage behind Confederate.

When compared to the aggressive police response to protests in Ferguson following the shooting of Michael Brown, it's near impossible to deny that law enforcement treats racial minorities with more physical force than they do with whites.

11. Harming People Who Didn't Even Attend

Nazism and the words of Adolf Hitler were openly embraced by many Unite the Right supporters.

Only bright side is those who showed up to oppose the hate.

Hopefully more people feel this way than the opposite.

Whether the president or anyone in the administration will acknowledge Friday and Saturday's events remains to be seen.