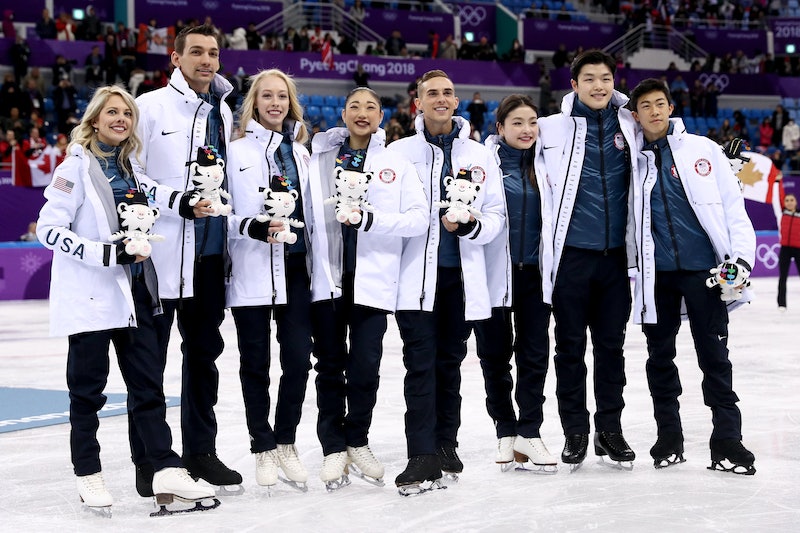 Team USA brought their A-game for the figure skating team competition. And it certainly paid off for them, as everyone who competed in the group walked away with a bronze medal. The team consisted of Bradie Tennell, Mirai Nagasu, Nathan Chen, Adam Rippon, Alexa Scimeca Knierim and Chris Knierim (pairs), and Maia and Alex Shibutani (ice dance). And what better way to celebrate than with an adorable selfie?

Alex Shibutani posted a the photo of himself with all of his teammates and it's seriously the best. All of the bronze medalists got together to take the photo, which showed them in a group huddle looking down at the camera (with some posing with a cute, stuffed animal version of Olympic mascot Soohorang the Tiger). Alex's teammate, Tennell, also posted the photo on her Instagram with the caption "Squad goals," which pretty much says it all about this talented, Olympic-medal winning group.

The team competition, which first began at the 2014 Sochi Olympics, has countries' assembling their best competitors from all of the major disciplines within the sport (ladies, mens, pairs, and ice dance) to compete. The scores from all of those routines are then totaled and the highest scoring country earns the gold. In this year's Olympic Games, Canada secured the gold (for the second Olympics in a row) and the Olympic athletes from Russia earned the silver. And, as previously stated, the American team won the highly-respected bronze medal.

The skaters definitely had a lot to celebrate after winning their medals. In addition to dazzling viewers with their routines, some of the skaters also made history at the 2018 Olympics. Rippon, who competed in the mens single free skate portion of the competition, made history as the first openly gay U.S. athlete to compete in figure skating at the Olympics. The skater captured the hearts of many as he performed a routine to a Coldplay medley and landed two triple axels during his skate.

Nagasu, who performed in the ladies free skate, also made history at the games for one particularly amazing move. The skater became the first American woman to land a triple axel at the Olympics and is only the third woman in history to do so at the games, as USA Today notes.

Like with Rippon, many couldn't help but gush over Nagasu's astounding performance and history-making feat. Even Reese Witherspoon got in on the well-deserved fanfare and congratulated the skater on Twitter in one of the sweetest social media exchanges ever.

It's so wonderful to see the tight-knit figure skating team celebrating their win. The group has always appeared to be close, as their many social media posts have illustrated. While they all, undoubtedly, have loads of fans, some of their biggest supporters are each other. Throughout the competition's routines, you could always see the teammates cheering each other on. The team also got to walk in the Olympic opening ceremony together, where they appeared to have a blast.

In terms of the team's tight-knit status, the team's co-captain, Scimeca Knierim said it best when she said, according to NPR, "We're a very close group, all cheering one another on." She continued, It's a blessing, and I could not have thought of a better team to share it with because we have all had our own journeys to get here."

And they will definitely all still be rooting each other on when they go on compete in all of their individual events, where they're sure to shine, as well.