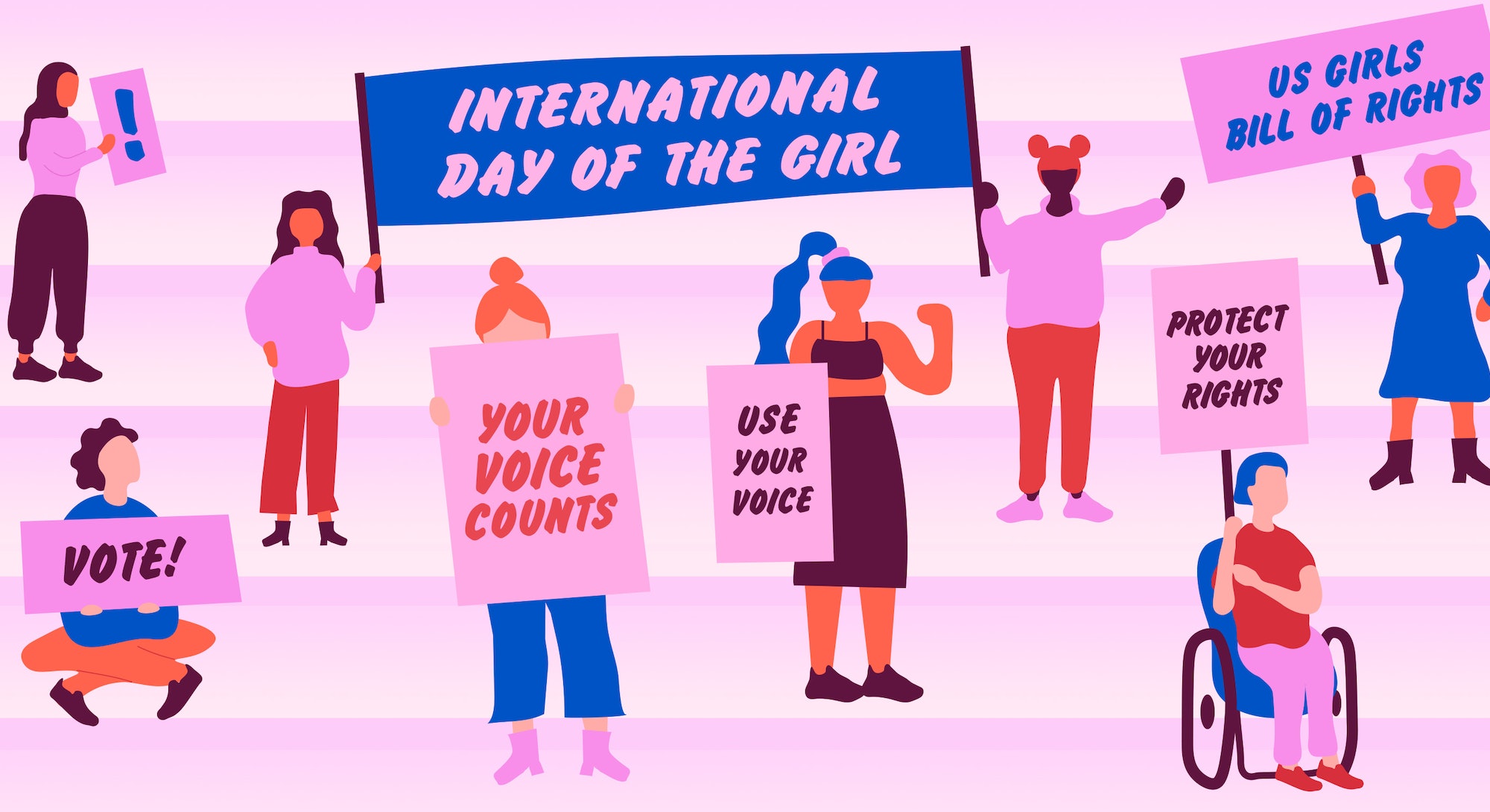 The majority of women and girls in Generation Z don't feel like their rights are as protected as their male peers, according to a new survey Bustle Digital Group conducted in partnership with Pollfish and She's the First. Gen Z activists say they feel like girls just aren't being prioritized. So ahead of International Day of the Girl, Bustle asked more than 2,000 girls and women in the United States what issues are most important to them, and developed the U.S. Girls Bill of Rights.

In 2011, the United Nations (UN) officially declared Oct. 11 of every year to be International Day of the Girl. The movement aims to bring together activists and organizations to take action and highlight the distinct challenges girls face around the world. She's the First developed the Global Girls' Bill of Rights, which will be presented to the UN.

In the Bustle/She's The First survey, the respondents, who were girls and women between ages 14 and 22, highlighted the many threats young women face, including health care, gun violence, and identity-based discrimination. And while the survey revealed that education, preserving the planet, and stopping gender-based violence are at the top of many young women’s list of priorities, they’re also the issues they’re least optimistic will be resolved in their lifetime.

"This power dynamic we see yet and yet again is stopping us from really being able to have our full potential."

Aasha Shaik, a 20-year-old gender equality activist who has worked with the UN on girls’ issues since she was 15, says International Day of the Girl is necessary because it highlights how girls’ rights are human rights. She tells Bustle there’s no question that girls around the world need and deserve more awareness around the issues they face every day. “It comes down to human rights,” she says. “How do you explain that people should care about human rights?”

The U.S. Girls Bill Of Rights

Shaik says education is one of the key concerns her generation has, which was reflected in the survey results. Nearly one-third (31%) of the 2,000 respondents chose education as one of their three most important issues.

“Girls’ education is definitely something that has a very large impact on multiple facets of girls’ lives,” Shaik told Bustle, “when we look at poverty, when we look at hunger, education has the power to change that generationally and cyclically.”

Also in the top five most important issues young women and girls are facing was gun violence. Lane Murdock, the 17-year-old activist who started a National School Walkout after the 2018 shooting at Marjory Stoneman Douglas High School in Parkland, Florida, tells Bustle she started the protest because she felt like she needed to step up and take things into her own hands. She says gun violence is a problem that affects everyone, but she didn’t feel like politicians represented people like her.

“In a lot of ways, gun violence activism can be a boys club,” Murdock says, “and just because the people you work with are working in the politics of good doesn't mean they're always good.”

"Young women really need to understand they can do it themselves."

Murdock says that the gender and age gaps between those on the frontlines of activism and those in positions of power creates an uneven playing field. “When you look at who's representing us, it is mostly men,” Murdock says, “so this power dynamic we see yet and yet again is stopping us from really being able to have our full potential and is in fact putting us in danger.”

On that note, Bustle/She's the First survey also revealed that many young women don't think these issues will be solved in their lifetime. Only 19% believed climate change would be addressed, and only 10% believed education reform would take place. One respondent wrote, “if we don't preserve our planet, none of the other issues will matter.”

But Murdock says that despite knowing the cards are stacked against young women in both activism and politics, she believes that taking that first step in bringing about change or raising awareness is one of the most impactful things anyone can do.

“You know, I was just one person,” Murdock says, “that's what society is. So I think young women really need to understand they can do it themselves.”

Both Shaik and Murdock stressed that no matter what the issue is, girls and young women are at a unique intersection that is often left behind by large-scale movements that target women or children. That’s why International Day of the Girl is so important, Shaik says, because it sheds a light on the unique challenges facing girls. Dismantling the assumption that girls’ issues are the same as women’s or children’s issues is a huge part of what inspires Shaik’s activism, she says.

“We have unique issues and we’re going to need unique solutions that we’ve never seen before to fix them,” Murdoch echoes.

Despite the fact that only 8% of respondents in the Bustle survey were hopeful that gun violence would be addressed in their lifetime, Murdock said she’s not discouraged. She sees her generation’s role in activism across issues as a marathon, not a sprint. One of the most important things for girls to keep in mind, she says, is that they should be unapologetically authentic, no matter what they are fighting for. That means taking advantage of their intersectionality, and especially their perspectives as young people.

“I think the only way we'll solve this issue or any issue that involves young people for that matter,” Murdock says, “is by being the most authentic Gen Z young people we can be.”