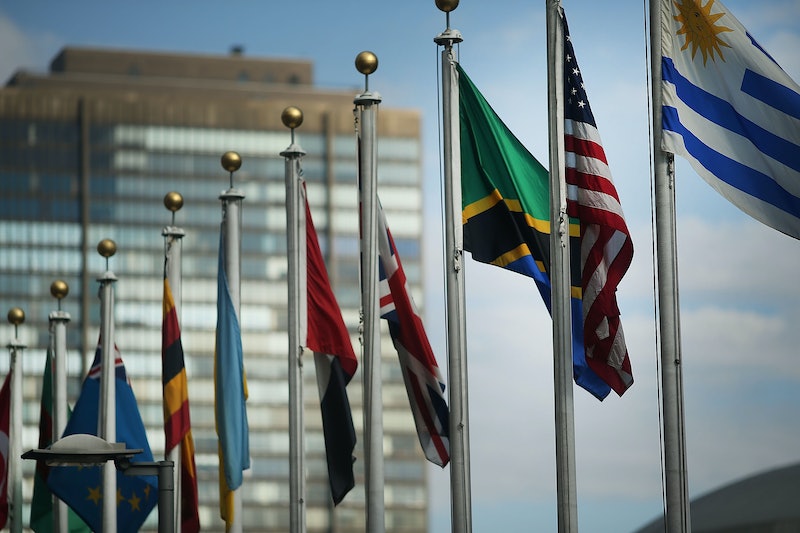 This week, the United States is participating in the 63rd session of the Commission on the Status of Women (CSW) at UN Headquarters in New York City. During the negotiations at this meeting, American officials are reportedly taking some pretty controversial stances. Notably, the U.S. is diluting women's rights documents at the UN, seeking to remove references to "gender" from the forum's outcome document, The Guardian reported. Moreover, the paper also noted that the United States reportedly may not reaffirm its commitment to the Beijing Platform for Action, which is considered a landmark international women's rights document.

The Guardian noted that the United States has implied during discussions at the CSW that it's intent on pulling focus away from the term "gender" — and toward "women and girls" instead. As Cherith Norman Chalet, the U.S. ambassador for UN management and reform, said during a speech at the forum on Friday:

We are not about gender jargon. Today, here at the Commission on the Status of Women, we are about women. Women and girls. The life of all women and girls.

This rhetoric reflects a similar stance taken by U.S. officials at a different UN event — the Third Committee meetings — last year. Indeed, in October 2018, The Independent reported that American diplomats were encouraging other countries to remove the word "gender" from UN human rights documents and replace it with "woman."

In addition to reportedly seeking to change terminology in the CSW's outcome document, the United States may also be using the forum as a platform to revisit international commitment to the Beijing Platform for Action. As Foreign Policy indicated, the U.S. delegation at the conference has reportedly suggested that the CSW's outcome document indicates that the forum “takes note of” the women's rights agreement, as opposed to reaffirming commitment to the agreement. The outlet suggested that, in taking this reported stance, the United States is perhaps seeking to diminish the global significance of the agreement and the consensus around it.

Muadi Mukenge, the chief of development and external relations at Ipas, a reproductive health nonprofit, told The Guardian that she believes that the potential notion of the United States questioning commitments to the Beijing Platform for Action is very alarming. As Mukenge told the paper:

The US played a leadership role in the passage of Beijing, so to take a step back is regrettable. We know so many areas of Beijing have not been realized yet. There are still gaps and inequalities and it would be irresponsible for the US to take this position ... When the US speaks it has an impact on the global conversation. It could potentially set a precedent.

Foreign Policy noted that many women's rights experts commented that the United States' negotiating stances at the CSW have sometimes seemed to align with countries that don't typically have favorable human rights records, like Saudi Arabia and Iraq. “The U.S. continually wants to call out bad actors and human rights violators but then pals up with them at the U.N.,” Tarah Demant, the director of the Gender, Sexuality, and Identity Program at Amnesty International told Foreign Policy. “There’s an irony there.”

The Trump administration has not yet commented publicly on reports about the American delegation's approach to negotiations at the CSW. You can be sure that many women's rights advocates from around the world will be watching to see what language is contained in the CSW's final outcome document after its session concludes on March 22.