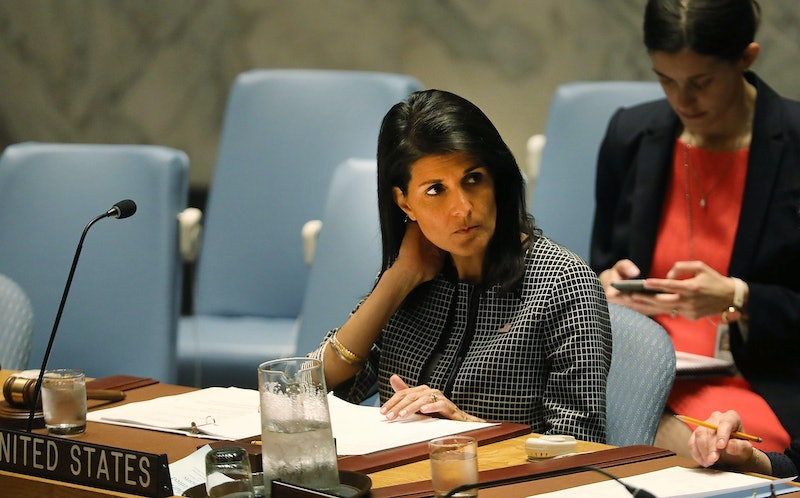 This has not been a good week when it comes to America holding its position in the international sphere. In keeping with its recent isolationist pattern, now the U.S. may leave the U.N. Human Rights Council over an issue with the council's treatment of Israel. In March, the U.S. boycotted a session of the Human Rights Council for the same reason. U.S. ambassador to the U.N. Nikki Haley released a statement on the matter, saying that the country would only participate in order to vote against what she called "the outrageous, one-sided, anti-Israel resolutions" that the Council was putting forward. Now, it seems that their decision process has moved forward, and the U.S. will no longer maintain its membership in the Council at all.

Haley wrote an op-ed in the Washington Post detailing the administration's stance on the Council, essentially arguing that it hadn't made fair decisions in terms of which countries to castigate and which countries to include as members. She uses the examples of Venezuela, Cuba, and Russia as human rights abusers who have a seat at the table and whom the HRC has not chosen to condemn. She specifically focuses on Israel as the target of unfair condemnations, saying that “when the council passes more than 70 resolutions against Israel, a country with a strong human rights record, and just seven resolutions against Iran, a country with an abysmal human rights record, you know something is seriously wrong.”

Her reasoning, however, ignores the human rights abuses of American allies like Egypt and Saudi Arabia, who also have seats on the Council. Donald Trump has also not criticized those two countries, and he seems to have found a lot of common ground with their autocratic leaders.

Concern over the U.N. HRC's treatment of Israel has actually caused the U.S. to break away from the Council in the past. The Bush Administration did not join the U.N. HRC in 2006 when it formed to replace the U.N. Human Rights Commission, which had received criticism for being too accommodating to countries with bad records on human rights. The Bush administration claimed that the new Council had the same problems, but then the Obama administration quickly joined the council in 2009.

Critics of the presumed decision to withdraw now say that this is poor timing, and that the move could be seen as a way to undermine the Council and give strength to governments that ignore the fundamental principles of human rights. While the Council does not actually have the power to issue orders to the governments in question, its rebukes do carry a certain amount of weight. The Obama administration certainly did not find it to be without fault, but they went with the idea that they could do more to change it from the inside. Trump and his administration, it appears, will instead burrow further into their isolationist stance.