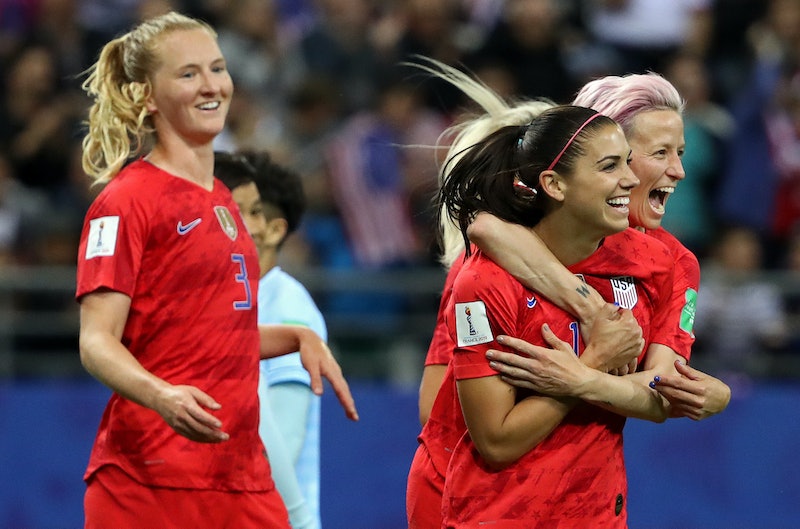 On Tuesday, by obliterating Thailand's team 13-0, the U.S. women's team broke a World Cup record, Yahoo! Sports reports. The American team won by the largest margin ever for a women's or men's World Cup soccer game, according to the Guardian, scoring three goals in the first half of the game and 10 in the second.

The U.S. women's soccer team is the number one ranked team in the world, according to CBS Sports, so the victory wasn't entirely unexpected. It's also the oldest team in the tournament, NPR reports, with an average age of 29. Tuesday was the team's first match of the 2019 series, and only the second time the United States has faced Thailand in a World Cup game, NPR reports.

The U.S. team is defending its title, as it won the FIFA Women's World Cup at the last tournament in 2015. It's already become the only women's team to rack up three World Cup victories, and if it emerges victorious in the 2019 series, it'll extend that record. Germany is the only other country to win more than one Women's World Cup victory, according to Yahoo! News.

In addition to scoring a wider margin of victory than any World Cup team before them, Alex Morgan scored five goals during the game, Yahoo! News reports, tying the individual goal record for any American woman. This also gives her more goals than any other team in the tournament so far, according to NBC News.

The Women's World Cup has been held every four years since 1991. The U.S. team won that tournament, as well as the 1999 and 2015 championships. The U.S. men's team, by contrast, has never won a World Cup.

As the U.S. team scored goal after goal in Tuesday's match, a number of viewers told the Guardian that they were irritated with the American fans in the audience for cheering loudly when the U.S. team scored. One told the newspaper that the Americans in the crowd showed "no class" and were acting "obnoxious" by celebrating their team's victory, while another accused the "the bloody obnoxious jingoistic crowd" of "poor sportsmanship."

However, others told the Guardian that cheering loudly for one's team is customary and expected during live sporting events, especially championships. One viewer pointed out that "there are plenty [of] lopsided scores in the men’s game, yet you don’t hear these kinds of criticisms," noting that Norwegian fans received no criticism for cheering their team when Norway beat Honduras 12-0 in the U20 World Cup in May.

"[The U20 teams] are basically kids and yet there is an acknowledgement, even at that age, that a bad loss is a bad loss," viewer Cal Candor told the Guardian. "Why are boys assumed to be more emotionally mature as teenagers than grown women?"

ESPN reports that Tuesday's game was the first in Women's World Cup history in which seven different players on a team scored a goal. In addition, Carli Lloyd became the oldest American women, at 36 years and 330 days, to score a World Cup goal.