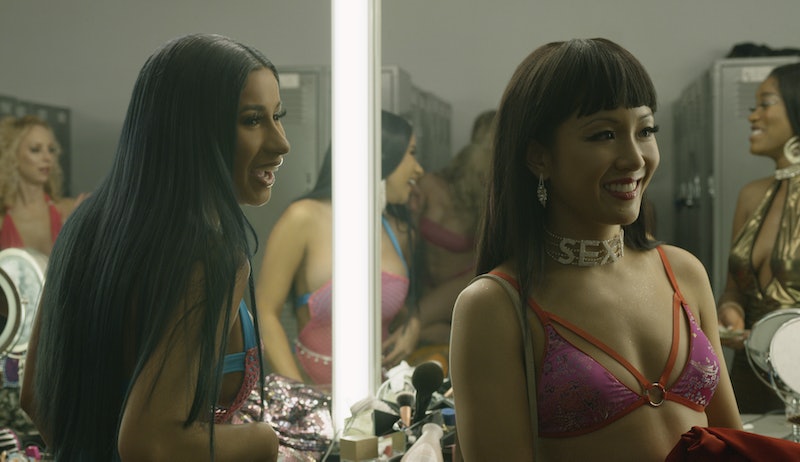 Hustlers spoilers ahead. The time period in which Hustlers takes place plays a major role in the film. The movie starts out not long before the 2008 financial crisis. For the early part of the the film, the strippers are making money from Wall Street guys who are spending without a care, and everyone involved feels pretty untouchable in their own way. Before everything things take a major turn, Destiny (Constance Wu) explains that the last great night at the club where she worked was when Usher came in and all the women took to the stage to dance for him. Of course, this involved the real Usher being in Hustlers, which was a dream come true for the film's writer and director, Lorene Scafaria.

"I wrote that into the script never imagining it would come true," says Scafaria, speaking over the phone to Bustle. "It was that song ["Love in this Club"] written into the script and everything."

When Scafaria was writing the movie, she didn't yet know that Jennifer Lopez would be cast in one of the lead roles, but when that worked out, it was easier to make the Usher cameo happen. Lopez plays Ramona, the leader of a group of former stripers, who start stealing money from men by drugging them and running up their credit cards at the strip club that used to employ them.

But all that goes down after the financial crisis hits. Right before we get to that point, Liz, a stripper played by singer Lizzo, runs into the back room where all the women hang out and get ready for the night, and starts yelling about how Usher is at their club. Naturally, everyone is excited, and they all go on stage together to dance for him and his entourage along to his own music. In voiceover, Destiny talks about what a great moment it was, and it certainly looks like a dream come true. The stage is full women of all different shapes and sizes and colors just getting down to Usher's new song "Love in this Club" as though a giant recession isn't looming. At one point, Ramona even crawls over to Usher and flirtatiously asks his name, the joke being that, duh, everyone knows. It's freakin' Usher.

While this sounds like a fun time for everyone included, particularly Usher, Scafaria still had to do a little convincing. "There was a day when I was sending Usher pictures of himself in hats to prove that he still looked exactly the same as he did in 2007, 2008." He does.

"It was pretty extraordinary that he was so willing to play," the filmmaker continues. "He brought his old necklace and big chain that's in the scene. He had a great time, I think. That was one of the most fun days of my entire life, that's for sure."

When Usher was cast, his role was undisclosed, which makes a lot of sense. When Lizzo comes into the room screaming about the singer being at the club, it really is surprising. You really get the feeling that everyone is living a high... and that it's all about to come crashing down.