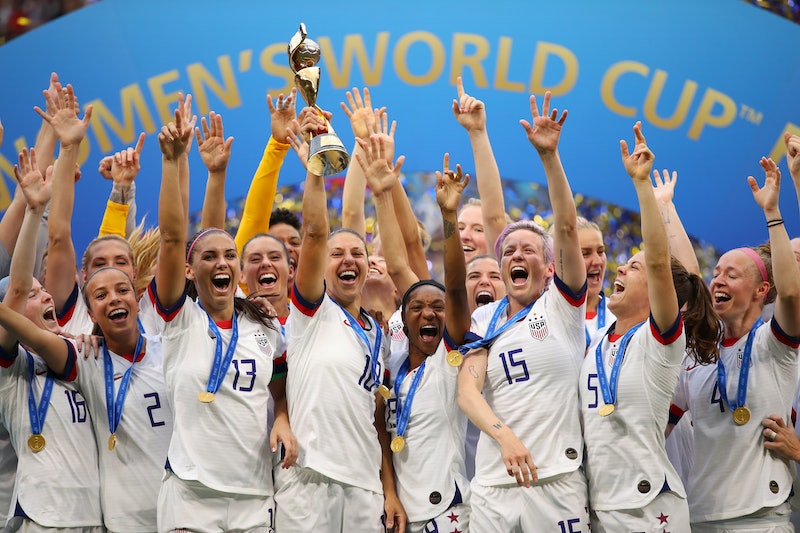 In this op-ed, writer Gabrielle Ulubay writes about patriotism and the USWNT's World Cup win.

When the clock hit 95 minutes on Sunday, the United States women’s national soccer team (USWNT) dashed onto the field of the Stade des Lumieres in Lyon, France, to celebrate their second consecutive World Cup win. Meanwhile, in front of television sets and in sports bars across the U.S., Americans of all ages, races, sexualities, and genders celebrated, draping American flags across their shoulders like wings and chanting “USA!”

Those celebrations felt like a far cry from a recent Gallup poll that made headlines for its finding that less than half of respondents identified as “extremely proud” of being American, an all-time statistical low since the analytics institution first measured it in 2001.

While discussing the Gallup poll on CBS’s Face the Nation, conservative Washington Post columnist Michael Gerson argued that the dip in American pride is likely due to the contemporary conflation of American patriotism with rising right-wing nationalism, which tends to alienate immigrants, women, and minorities. Our complex feelings about national identity are too often oversimplified. I’ve spoken with people both at home and abroad who problematically assume that the patriotic are bigoted, or that the progressive hate their country.

There are diverse forms of patriotism, too. USWNT co-captain Megan Rapinoe has called the United States “a great country” and said she herself is “particularly and very deeply American,” but she has also harshly criticized President Donald Trump, called for the country to do better, and refused to participate in the National Anthem as a protest against racial and LGBTQ inequality. Trump tweeted that Rapinoe should not “disrespect our Country, the White House, or our Flag,” but Rapinoe demonstrates that patriotism is not synonymous with hyper-nationalism, and that it can exist alongside criticism.

Similarly, post-game USA chants swelled into cries for equal pay when FIFA President Gianni Infantino stepped onto the field, drawing attention to the fact that the Fédération Internationale de Football Association offered $30 million in prize money for the women’s World Cup this year, while the men’s tournament paid out $400 million last year.

The USWNT and their World Cup win further empowered Americans to critique powerful institutions. They also moved the ball forward on discussions about gender equality, opening the minds of so many Americans to their fight for equal pay.

I recently covered a friend’s shift at a New York City-area summer camp where I used to work, and saw a little boy wearing an Alex Morgan jersey. When I asked him about it, he and his friends nearly burst with excitement over the U.S. team’s success. This was a far cry from my childhood, when the few children who even knew there was a Women’s World Cup would differentiate between it and the “real” men’s tournament.

Only one child at the camp said that he was rooting for another team — Italy, for which he cited his Italian ancestry — and there was an immediate outcry among the other children. One girl admonished, “But you’re American!”

Indeed, millions of Americans across a wide range of demographics are proud of the team. According to Nielsen, the women’s World Cup earned higher viewership ratings than the 2018 men’s World Cup and was one of the highest-rated soccer telecasts in U.S. TV history. Players are not dismissed because they are women, but lauded because they are athletes. When fans watch them lift their trophy to the sky, we cannot help but cheer along.

Of course, the win did not instantaneously create some kind of utopia. Women’s sports remain under-funded, female and LGBTQ athletes face alarming discrimination, and our political divisions remain. Nevertheless, it is just as important to celebrate the USWNT’s victory as a step in the right direction as it is to remember that the struggle for equality continues.

In showing that patriotism and social protest are two sides of the same coin, the USWNT gave us a gift. As chants of “I believe that we will win” came from my television set, I couldn’t help but agree.