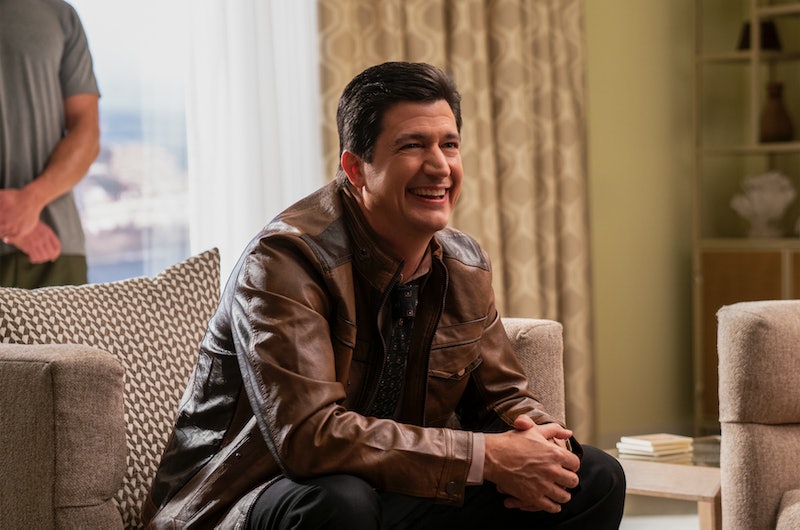 Warning: This post contains spoilers for Veronica Mars Season 4. There is no doubt that Veronica Mars is a show about its namesake character. But, over the course of four seasons, 15 years, 72 episodes, and a fan-funded movie, other characters — some smaller than others — have become just as crucial to the fandom as Veronica herself. In Hulu's new season of Veronica Mars, cameos from former stars of the show are littered throughout the eight new episodes, making the first line of the beloved theme song ("A long time ago, we used to be friends") feel particularly powerful.

The series, which dropped on Hulu a week earlier than planned, is filled with faces of the past that only eagle-eye fans of the original series will notice. Sure, some of the faces (Leo) are more obvious and given more time onscreen (Leo), but some of the returning characters appear for such a quick amount of time, unless you're looking for them, you might totally miss them. Or, you might not even remember you knew them at one point!

Not sure if you caught all of the familiar faces during your first viewing? Don't worry, we've rounded up all of the cameos in Season 4 so you can compare with how well you did.

What would Veronica Mars be without Percy Daggs III? While Season 4 could have used even *more* Wallace, Veronica's BFF makes a few appearances throughout the eight new episodes that will make any marshmallow happy.

Dick's first scene in the new season probably scared the sh*t out of most fans, but fear not: Ryan Hansen is back and a famous actor now!

Season 4 was a rough season for one of the most underrated friendships of the series. But Weevil does, at the end of the day, seem to have Veronica's back, despite their rocky history.

Even though Big Dick Casablancas wasn't an enormous character in the first go-around of the show, he actually plays a very important role in the revival. He's still as awful, though.

When listing off "people I'd like to see return to Veronica Mars," you probably left off anyone involved with the Fitzpatricks. In addition to her dad putting the Fitzpatricks away many times during his stint as sheriff, Veronica had some pretty rough run-ins with the family during Season 2.

If there's a possible trial to be had, you bet Cliff will sniff it out. As the busiest public defender in Neptune, Cliff returns to Season 4, probably much to the chagrin of the sheriff's department.

Season 3 may have been a long time ago, but you can't forget Tim. Tim, played by James Jordan, was the teaching assistant for Professor Hank Landry at Hearst College, who was accused of murdering the Dean of Students, Cyrus O'Dell. As it turned out, Tim actually framed Prof. Landry after an unfavorable recommendation. Like many of Veronica's former cohorts, Tim is still in jail.

Another Season 3 villain and Chino inhabitant is Mercer Hayes, who is currently serving time for a series of rapes happening at Hearst College. In hopes of finding out more about Big Dick's time in jail, Veronica grills Mercer on what he knows and promises to make sure he never makes it to parole.

Oh, Leo. What is there to say about Leo other than maybe in another world he and Veronica could be together. Maybe? In Season 4, Leo has a new gig — F.B.I., thank you very much — and works with Veronica to solve the mystery of the Neptune bomber. He bends the rules, a lot, for Veronica, so even though years have passed, not much has changed between these two.

He's skeevy, he's immoral, he's Vinnie Van Lowe! Even though he's Mars Investigations number one competition in Neptune, Vinnie holds a special place in Marshmallows' hearts. In Season 4, he's back, making things Difficult — with a capital D — for the Mars family... a.k.a., doing what he does best.

You may remember Max's introduction to the show as the guy likeable Hearst College guy who fell for a mystery girl at ComicCon, but he later became Mac's boyfriend. Now, in Season 4, he owns a dispensary on the boardwalk that is being targeted by the Neptune bomber.

Parker became a pretty important character in Season 3 as Mac's college roommate and a Hearst Rapist survivor. She had a brief romantic relationship with Logan, too. In Season 4, Parker and Logan run into each other as he is acquiring a marriage license for him and Veronica, and she is working on finalizing her divorce.

He either loves to hate Veronica, or hates to love her. Which ever it is, he's probably pretty happy she's been around to save his butt in some dangerous (and compromising) situations during her tenure as a high school student. In Season 4, she's still saving him when she realizes that Kane High School is the target of the next bombing.

If you're amped up by the ticking clock to get to the final bomb, you might have missed this cameo. Jake Kane, a.k.a., Lilly's dad, a.k.a., also Duncan's dad (remember him?), a.k.a., the tech mogul, a.k.a., the guy Keith accused of murdering Lilly back before Season 1 even began, returns to the show to open a new tech-driven high school where Wallace teaches. Jake Kane is, still to this day, unhappy to see Veronica.

In a truly surprising return to the show, Kane Software's number one security guy takes over for Logan when he leaves the Maloof security detail in Season 4.