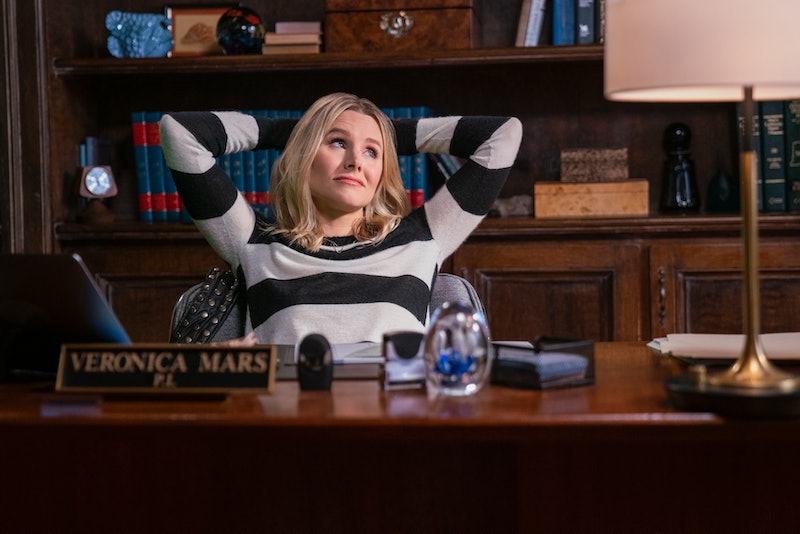 It's rare to see a television show with an opening credits sequence these days, let alone a theme song. That trend went away around 2010. Luckily for us, while many shows that used to have opening credits and theme songs have long since abandoned them, Veronica Mars has not. The Veronica Mars Season 4 theme song might seem different at first, but it's actually just a fresh take on an early 2000s classic.

"A long time ago, we used to be friends." It's a phrase one might use to reference an old acquaintance or college roommate, but to a Veronica Mars fan, it really just means that another episode of detective goodness is about to begin. For three years, Veronica Mars began with opening credits to the tune of The Dandy Warhols' "We Used To Be Friends," and the song quickly became a kind of calling card among fans. It was so tied to the show that showrunner and creator Rob Thomas even made sure to feature it in the 2014 Veronica Mars movie.

It's impossible to even imagine a Veronica Mars without "We Used To Be Friends." That said, it's 2019, which meant it was time for a small change. And, instead of the Dandy Warhols singing the iconic theme song, the Veronica Mars Season 4 theme song is a brand new Chrissie Hynde interpretation.

The new theme song is fitting considering the show is on it's fourth life — it premiered on UPN in 2004, moved to The CW in 2006 (where it got cancelled), came back for a movie in 2014, and is finally now returning for a Season 4 on Hulu. Why not celebrate the show's longevity by adding a little pizazz to the opening credits?

Veronica Mars star Kristen Bell and showrunner and creator Rob Thomas announced the new theme song a few weeks before Season 4's release, with a cute Say Anything-inspired video, released on June 21. "It's the theme song, isn't it?" Thomas asked Bell in the video after she broke it to him that they should start making television with other people. "You wanted something new and fresh, the Oak Ridge Boys just didn't float your boat." Then, in an effort to sway Bell's affections, Thomas showed up outside her window, carrying a boombox playing Hynde's new cover.

Hynde's take on "We Used To Be Friends" is a bit moodier than the original, and certainly pairs well with the edgy, dark opening credits of Season 4. It also feels a bit more fitting considering the subject matter of these new episodes. The season's big mystery revolves around a series of bombings in Neptune, which doesn't really pair too well with a more upbeat theme song.

Besides, Thomas has been clear he wanted Season 4 of Veronica Mars to feel different. "We do not want to just keep making the same show we made 15 years ago," he said in an interview with Vanity Fair. "It's certainly more adult."

And what signals to fans that Season 4 is different from those past better than a brand new opening credits sequence?

More like this
Everything To Know About 'Only Murders In The Building' Season 3
By Gretchen Smail and Kadin Burnett
Hilary Duff's Husband Matthew Koma Has Her Name Tattooed On His Butt
By Jake Viswanath and Stephanie Downs
Cruz Beckham Teased New Music With An Adorable Nod To Mom Victoria Beckham
By Stephanie Topacio Long
Zach Gilford Admits He Forgot Taylor Swift's Name When He Starred In Her Music Video
By Jake Viswanath
Get Even More From Bustle — Sign Up For The Newsletter
From hair trends to relationship advice, our daily newsletter has everything you need to sound like a person who’s on TikTok, even if you aren’t.