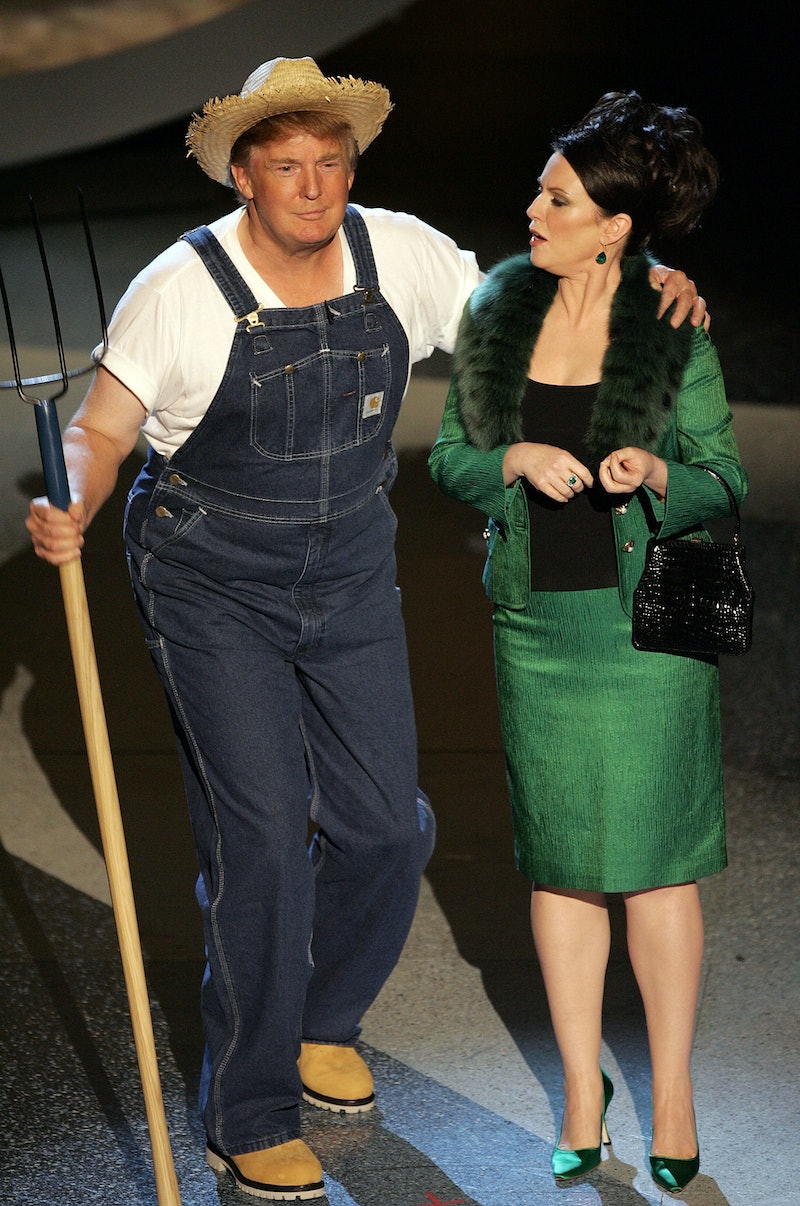 As the government inches toward a partial shutdown over the holiday, President Trump appears intent on keeping things light. On Thursday, to celebrate his signing of the farm bill, Trump tweeted a video of his Emmy performance from 2006, in which he sang the theme song from a 1960s sitcom about farm life.

Back when he was just a real estate tycoon and reality TV host, Trump appeared onstage at the Emmy Awards with Will & Grace actress Megan Mullally as part of the Emmy Awards' comical "Emmy Idol" challenge, which featured celebrities competing for the title. In a straw hat and overalls, holding a pitchfork, Trump sang the theme song from Green Acres, a 1960s American sitcom depicting a financially well-off couple from New York City that decides to give farm life a shot. The show tells the story of a rich and rather sheltered couple try to make do in a small town.

Years later, Mullally reflected on sharing the stage with Trump when she appeared on The Late Show With Stephen Colbert in 2017. "He really wanted to win because people were calling in to vote," she said. "We won it. So the next day, I was in my Will & Grace dressing room and the phone rang and it was Donald Trump."

Trump's tweet comes amid fears of a partial government shutdown over his refusal to budge on funding a wall along the U.S.-Mexico border. According to House Speaker Paul Ryan, Trump refused to back the legislation without receiving the $5 billion he seeks for the wall.

“The president informed us that he will not sign the bill that came up from the Senate last evening because of his legitimate concerns for border security,” Ryan said on Thursday.

He may have been aiming to bring some levity to the otherwise tense climate in Washington, but it doesn't seem like Trump's "#tbt" tweet had that effect on Mullally. On Thursday, shortly after Trump shared the clip, the actress simply tweeted, "If you guys need me, I’ll be in a hole in the ground."

To some observers, Trump singing the theme song for Green Acres seemed ironic considering his own opulent New York roots. After all, the beginning lyrics of the song praises the calm that comes with bucolic life and how the rich New York couple don't need the Big Apple anymore.

"Keep Manhattan," it goes in the beginning, "just give me that countryside."

Maybe with Trump's tweeted clip, people out of the loop about his farm bill will make an effort of learning more about it. Per the bill, Trump will allot some $867 billion for agricultural expenditures.

The same clip may have even pushed people to learn about government shutdowns. If you're one of those readers, here's a primer to get you acquainted with just what occurs when a government partially ceases operations.