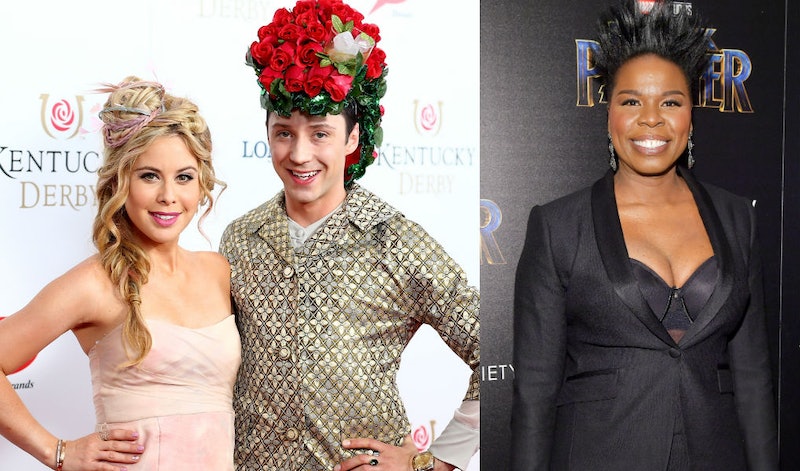 If you thought Leslie Jones was obsessed with the 2016 Rio Olympics two years ago, the slapstick SNL comedian (who is apparently having the time of her life in PyeongChang right now as a commentator for NBC) is upping the ardor in 2018. And, just in case there were any doubts about the scope of her dedication, this video of Leslie Jones, Tara Lipinski, and Johnny Weir dancing to Beyoncé at the 2018 Winter Olympics stamps them out. Because, as is clearly evidenced by the video, the NBC Sports commentator trio is not just in love with the Olympics — they're crazy in love.

In a choreographed lip-sync venture for the ages, Jones teamed up with Lipinski and Weir (both NBC Sports commentators and former figure skating Olympians) to spread their collective joy about the 2018 Winter Games, which are well underway in PyeongChang, South Korea. And, in a move that has "Leslie Jones, famed SNL funny woman" written all over it, the trio's decided hype-plan essentially amounted to this: a semi- costume'd, semi-choreographed rendition of Beyoncé's early 2000's hit, "Crazy in Love." Jones took to Twitter Saturday night, Feb. 17, to share the epic sing-along routine with her following. Of course, Jones capitalized on the prime opportunity for wordplay in her caption, writing, "We are so 'crazy in love' with the Olympics."

The video (which is equal-parts fun and delightfully fierce) spans the better part of one minute and appears to have been filmed pretty candidly — conceivably, via iPhone camera, or something similar. But, despite the video's playful tenor, it seems pretty safe to say that, as far as grandiose declarations of love are concerned, these quick-witted commentators were not messing around. The 50-second clip, which has since gone viral on social media, opens with a wonderfully discombobulated shot. Jones, Lipinski, and Weir stand side-by-side against the glaring backdrop of a sun-lit hotel hallway.

Two seconds in, the grinning trio assumes their opening position. No doubt gleaning inspiration from Queen Bey herself, the clip commences with a nod to the characteristic pillars of Beyoncé's music video prowess, including but not limited to: the smoldering eye, the hand set pointedly on the hip (here's looking at you, Weir), and, of course, the lightly staggered pyramid configuration to boot. The result, quite appropriately, feels sort of like an Olympic-themed homage to Beyoncé's "7/11," wrapped up in an SNL parody sketch and doused with a touch of "OK ladies, now let's get in formation."

Just as the iconic intro to Beyoncé's "Crazy in Love" begins to play in the background, Jones, Lipinski, and Weir (the likes of whom now double as stopgap musical act, apparently) each whip out their own personal pair of shutter shades, whose colors collectively make up Team USA's red, white, and blue. For the record, yes, that's shutter shades as in the lense-less sunglass variety whose contemporary 15 minutes of fame went largely hand-in-hand with its cameo in Kanye West's 2006 music video for "Stronger."

It's probably also worth noting that Jones stomps her way through "Crazy in Love" donning perhaps her most festive, ahem, athletic-imitation garb — which, unsurprisingly, amounts to a flashy, star-spangled tracksuit, with a headband to match. Because, while Jones might very well be a die-hard Olympics enthusiast, the comedian herself has admitted that she still doesn't know a whole lot about winter sports. (Who else thought curling was some kind of live-action rendering of a traditional marble game?)

Still, murky athletic knowledge or not, one thing is for sure: as far as Winter Olympics coverage is concerned, Jones, Lipinski, and Weir might be one of the most formidable trios the sports commentating world has ever seen.