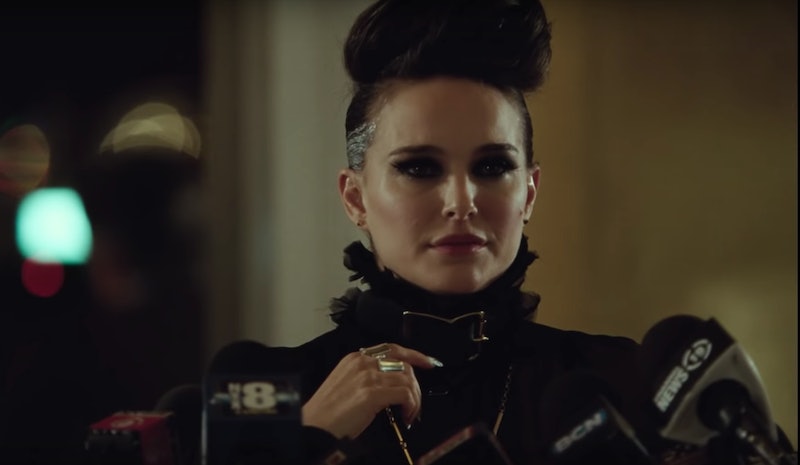 Get ready to see Natalie Portman like you've never seen her before. The Vox Lux trailer shows Natalie Portman as a pop star who refuses to give up on her dreams, even in the face of setback. The trailer shows Portman's character, Celeste, experience a swift rise to fame after performing at a memorial for victims of a mass shooting. The preview shows the faces of people crying at the vigil, surrounded by candles.

Based on the trailer, it looks like Celeste isn't super comfortable with her newfound recognition, at least not at first. There's a shot of a dressed-down Celeste walking down the streets of what looks like New York City, asking a group of photographers not to follow her.

But it looks like that doesn't last long, because the trailer also shows Celeste performing for a crowd of screaming fans in a huge concert auditorium. "People have been trying to kick me down for years," Celeste tells the crowd. "But I won't stay down."

There's also a scene of Celeste arguing with her teenage daughter, as well as one of her lashing out at her employees for apparently not treating her like an adult. What's notably missing from the trailer, though, is footage of Portman singing, considering the fact that her character is a pop star. Still, there might be more to look forward to in any additional trailers that come out before Vox Lux's December release.

Aside from Portman, Vox Lux also features some other big names. Jude Law plays Celeste's manager, who apparently doesn't have a name — his character is literally listed as "the manager" on IMDB — while Willem Dafoe will narrate the movie. Christopher Abbott is in the movie, too, though IMDB doesn't state what his character's name or role is yet.

Before Vox Lux, Portman's most recent movie was Annihilation, in which she played Lena. In addition to Vox Lux, Portman will appear alongside Kit Harington and Thandie Newton in the upcoming drama The Death and Life of John F. Donovan.

Celeste looks like a complex and somewhat flawed character, and that's definitely a good thing. Even in 2018, it's still rare to see women characters who are multidimensional. People in real life are complicated and messy, too. It's nice to see that reflected on screen, whether or not Celeste turns out to be a sympathetic character.

The Vox Lux trailer raises a lot of questions, but it looks like it will be the perfect movie for fans of Portman and pop music. And fans who love music-heavy movies like A Star Is Born might be excited to see another woman on screen who's claiming her power as a musician and a celebrity. In some ways, the movies look like polar opposites, but they both tell the stories of women who ascend to mega-fame in the music world. Vox Lux looks mysterious, but it also looks like a genuinely fun (and weird) film, and it sounds like it might be worth checking out over the holiday season.

More like this
Here’s Everything Coming To & Leaving Netflix In October
By Jake Viswanath
Snoop Dogg & Michelle Pfeiffer Lead Moving Tributes To Coolio
By El Hunt
What’s New On Netflix: Ana De Armas’ 'Blonde' & A Nick Kroll Special
By Arya Roshanian
What’s New On Netflix: Meet 'The Real Bling Ring'
By Arya Roshanian
Get Even More From Bustle — Sign Up For The Newsletter