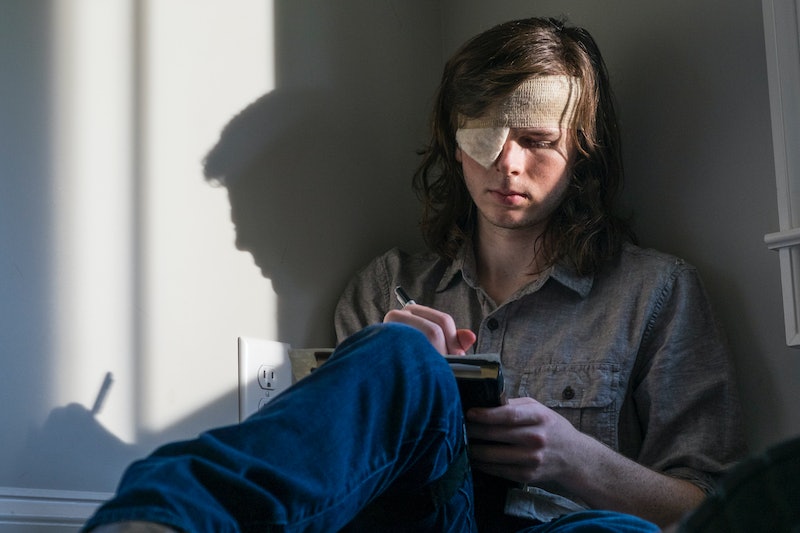 Spoilers for the Feb. 25 midseason premiere of The Walking Dead. Carl Grimes' time on The Walking Dead's zombie-infested earth has finally come to an end. The iconic character, who was one of the few original characters still remaining on The Walking Dead, died during Sunday night's episode after an encounter with a walker left him with a nasty, and fatal, bite on his abdomen. Cast reactions to Carl's Walking Dead death show that while fans were heartbroken after the unimaginable tragedy struck (and throughout the entirety of the episode even before Carl's death), Chandler Riggs' castmates weren't immune to the sadness of the goodbye, either.

The upcoming death was all but confirmed during December's midseason finale as the bite was revealed, so the cast has had plenty of time to stew upon the reveal before audiences were fully clued into how it would play out. Andrew Lincoln, Riggs' onscreen father, gave Carl unique goodbye, singing him a funny song about how zombies keep eating his family, proving once and for all that sometimes it does help to laugh through the pain. "I'm never gonna have to say Carl, again," Lincoln says before breaking into song. "The minuses far outweigh the pluses, so I'd like to dedicate this song to you."

During the show's subsequent wrap-up show, Talking Dead, plenty of other castmates of Riggs' made it very clear that they've enjoyed working with him, and though they'll miss him onset, they have no doubt that he'll continue to flourish as an actor in whatever other projects he decides to pursue. “You’ve already put in more time on a television series than the rest of us have," Josh McDermitt said. "And I love you, and please return my texts.”

It's evident from what the rest of the cast said that Riggs will be missed around the set. "I always just think of Chandler as a sound, caring person who you can get honest advice from. And he's a beautiful, compassionate, spiritual person," co-star Lauren Cohan said. "He started off almost like an old soul. He knew what he was doing. He knew what it all meant. He knew what it was all about from the beginning. And watching him grow into a leading man was a real joy," Norman Reedus added.

The song featured on Twitter wasn't the only send-off Lincoln gave Riggs, either. He appeared on The Talking Dead to further sing the actor's praises. “He’s my American son," Lincoln said. "To watch someone grow onscreen and off these past eight years has been one of the great privileges of my career. ... He’s a very, very special part of my life."

If it makes everyone feel any better, those final scenes probably hit star Chandler Riggs just as hard as it probably hit all of them. (Though he told Talking Dead host Chris Hardwick that Michonne actor Danai Gurira was the one who was most emotional on set.) Riggs told ComicBook.com that the last moments with Judith were the final ones he ever shot on the show, and that it was an emotional experience for him after spending so many years of his life as this character that so many have come to care for.

"It was super depressing, not the scene that I was excited for, but I think it turned out really well and I'm very happy with it," he said. While closing this chapter of his career is no doubt a huge deal for Riggs, he said that ultimately, he was satisfied with the way he ended his time on The Walking Dead."I was very happy with the way Carl ended up going out," Riggs told the website. "After reading the script, it made me feel a lot more comfortable with it and really excited to really show off what I can do in this last episode. This last episode it was some of the stuff that I'm most proud of. It's super, super exciting to finally be able to talk about it and have people see my work."

In a show that has seen plenty of characters come and go, Carl has endured for years — his absence will be noticeable, without a doubt. But his death does hammer home the ruthlessness of the post-apocalyptic world in which our heroes exist. He left the show on a note of hope, though, and that will likely serve as a driving force for the plot, even if viewers will no longer have the pleasure of seeing Riggs on their screens.