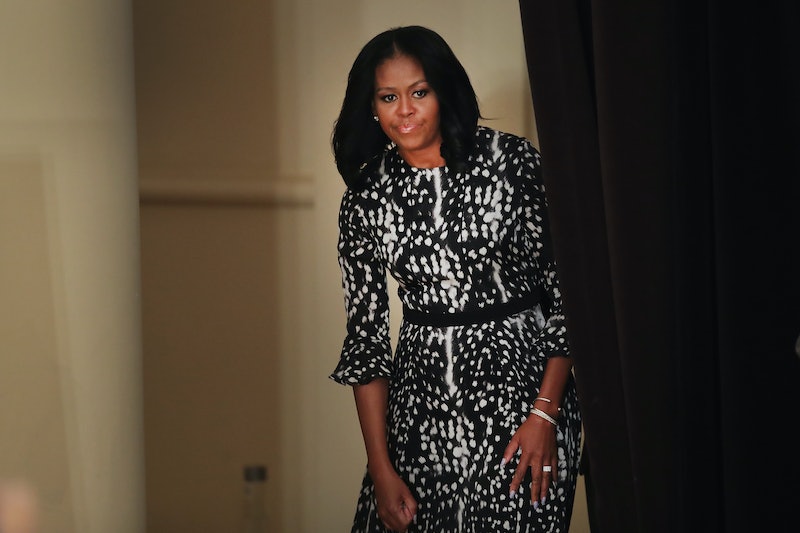 In the midst of a partial government shutdown, POTUS shows no signs of backing down on his stance regarding border wall funding. On Dec. 30, eight days into the shutdown, Trump referenced a "wall" he claimed the Obamas have around their house in D.C., arguing in a tweet that it was an example for the necessary and effective security measures a physical wall can provide for property. The problem with this argument, though, is one fact in particular: this "wall" around the Obamas' home supposedly looks more like an ordinary fence.

Trump wrote on Twitter, "President and Mrs. Obama built/has a ten foot Wall around their D.C. mansion/compound. I agree, totally necessary for their safety and security. The U.S. needs the same thing, slightly larger version!"

Though Barack and Michelle Obama have yet to directly address this assertion, neighbors confirmed to The Washington Post that there is nothing close to a 10 foot wall surrounding their 8,200 square foot property.

One anonymous neighbor said to the Post, "Trump has a very active imagination ... There’s a fence that goes along the front of the house, but it’s the same as the other neighbors have. It’s tastefully done.”

Photo evidence of the house in April 2018 confirms the fence in front of their home is much different from the "ten foot Wall" Trump claimed surrounds it.

Throughout the government shutdown, Trump has released a steady torrent of tweets about border wall funding and the stalemate between himself and Democratic leaders Nancy Pelosi and Chuck Schumer. He has accused Democratic senators of being responsible for the shutdown, even labeling it the #SchumerShutdown. He has also argued that the southern border of the United States has been an "Open Wound" for the nation, with "drugs, criminals (including human traffickers) and illegals [pouring] into Our country."

And, in case you were wondering, Trump clarified what the border wall would actually look like if it were built. Trump tweeted on Dec. 31, "Some areas will be all concrete but the experts at Border Patrol prefer a Wall that is see through (thereby making it possible to see what is happening on both sides). Makes sense to me!"

Meanwhile, Pelosi and Schumer released a joint statement on Dec. 31 regarding an outlined bill aimed at ending the shutdown in the new year, right as Democrats take control of the House of Representatives. Still, the proposed bill only includes $1.3 billion in border wall funding, not the $5 billion Trump has requested.

Preceding the announcement of the new proposed bill, Pelosi tweeted, "While @realDonaldTrump drags the nation into #TrumpShutdown Week 2 and sits in the White House & tweets, without offering any plan that can pass both chambers of Congress, Democrats are taking action to lead our country out of this mess."

Though Trump has yet to reflect any interest in compromise on the border wall, he has repeatedly pointed out that he's in the White House and wants to end the shutdown.