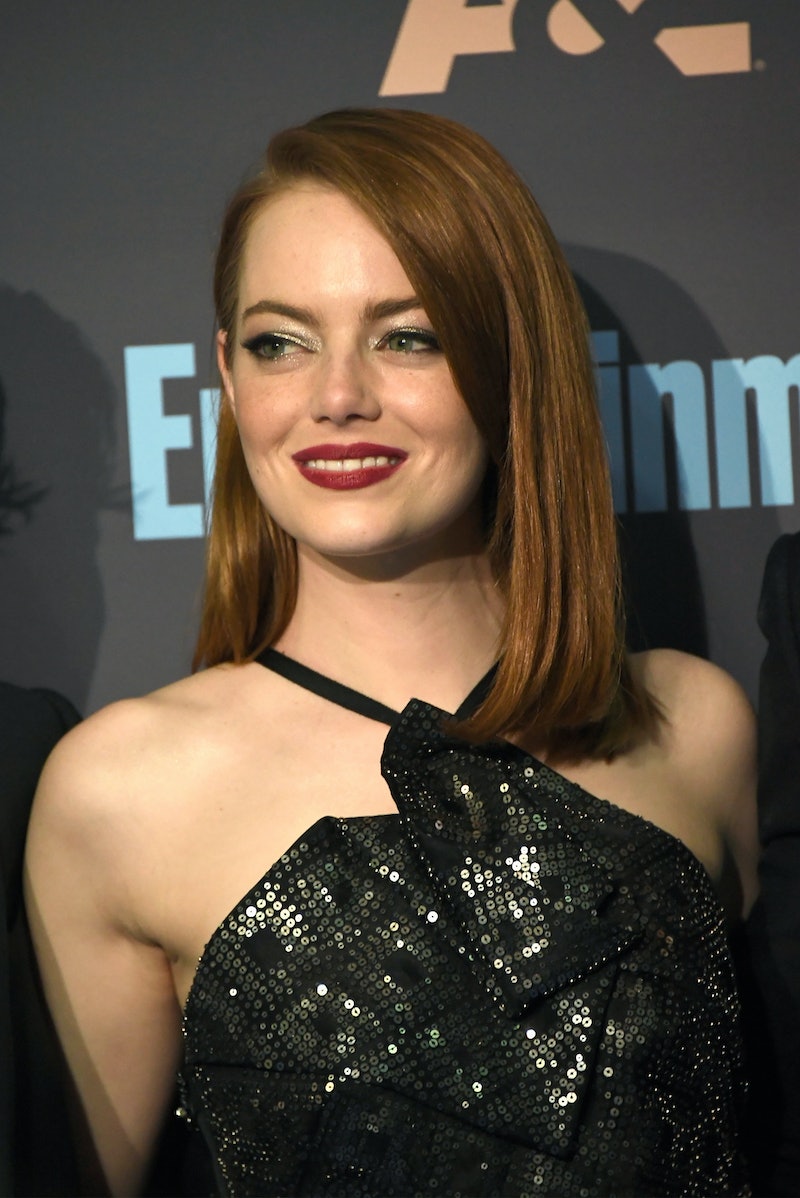 As someone who deals with anxiety on a daily basis, to learn how Emma Stone dealt with anxiety as a child is something I didn't know I needed to hear. If you also suffer from any level of anxiety, take a moment to read the following. In an interview with Rolling Stone published Wednesday, the La La Land star opened up about not only suffering from anxiety greatly as a little girl, but what she did to battle it.

After being sent to a therapist by her parents as a way to hopefully help her anxiety, Stone used her creativity as a weapon against it. "I wrote this book called I Am Bigger Than My Anxiety that I still have: I drew a little green monster on my shoulder that speaks to me in my ear and tells me all these things that aren't true." She continued, "And every time I listen to it, it grows bigger. If I listen to it enough, it crushes me. But if I turn my head and keep doing what I'm doing — let it speak to me, but don't give it the credit it needs — then it shrinks down and fades away."

How genius is that? It may not be useful to everyone, but Stone's book pretty much perfectly describes how anxiety feels once it overtakes you and what it feels like when you're able to fight it. Obviously, not everyone has the same experiences with anxiety, but for me, Stone has hit the nail on the head. From here on out, whenever I feel that little green monster creeping up, I'm going to think of Stone's I Am Bigger Than My Anxiety.

Just because she wrote this when she was young doesn't mean it still can't be used as an adult. Sometimes it's easier to cope with certain issues in your life when a solution is presented to you in a more simple way, rather than a complex one. This is exactly the type of self-help book I prefer.

What is also relatable here is the way Stone describes what anxiety felt like as a child. I don't know what it's like to suffer from that as a kid, because I didn't start feeling anxious or having panic attacks until my late 20s. However, based on what she told Rolling Stone, it sure seems like anxiety is the same no matter the age.

"My brain naturally zooming 30 steps ahead to the worst-case scenario," she explained. "When I was about seven, I was convinced the house was burning down. I could sense it. Not a hallucination, just a tightening in my chest, feeling I couldn't breathe, like the world was going to end." I can't count how many times I convinced myself that the worst is about to happen, which resulted in similar feelings.

Stone added, "There were some flare-ups like that, but my anxiety was constant. I would ask my mom a hundred times how the day was gonna lay out. What time was she gonna drop me off? Where was she gonna be? What would happen at lunch? Feeling nauseous. At a certain point, I couldn't go to friends' houses anymore — I could barely get out the door to school." Again, so relatable.

In addition to going to therapy and writing a book, Stone's other way of coping with anxiety was through acting. "I started acting at this youth theater, doing improv and sketch comedy," she said, "You have to be present in improv, and that's the antithesis of anxiety." Similar to her, I focus on my work and love of writing. When my mind is committed to that the anxiety usually doesn't creep in.

It's always helpful when there is someone else out there who understands how you feel and can even try to make it better. That's exactly what Stone has done here and I thank her for opening up, all while introducing me to the little green monster.