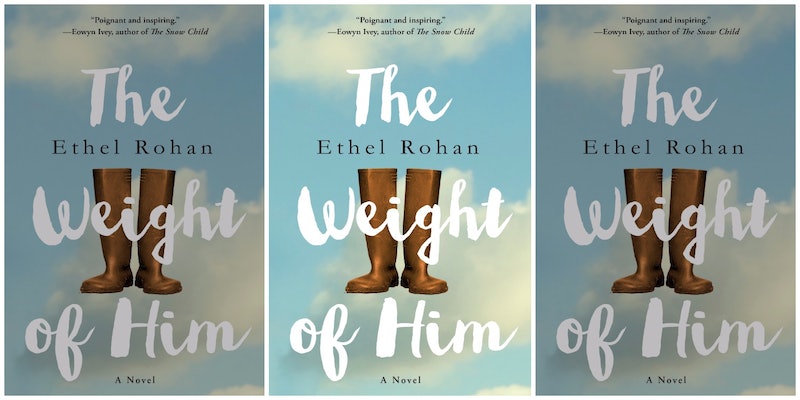 When you think of Irish literature, chances are a boys’ club of talent comes to mind: James Joyce, Oscar Wilde, W. B. Yeats, Seamus Heaney. Contemporary Irish lit, however, is quickly becoming a bookish terrain ruled by women — and I’m not the only reader who’s loving it. Award-winning and bestselling authors like Emma Donoghue, Anne Enright, and Eimear McBride are capturing readers hearts (and shelves) like crazy; and now joining their ranks is Ethel Rohan, author of The Weight of Him, out now. In an interview with Bustle, Rohan took some time to share insights into her inspirations, her deep connection to her characters, and what she hopes readers will take away from her debut novel.

Taking readers into the picturesque, haunting landscape of contemporary rural Ireland, The Weight of Him tells the story of Billy Brennan, an obese father and food-addict who embarks on a public weight-loss campaign in the wake of his teenage son, Michael's, suicide. Determined to save the lives of others while saving his own, Billy appeals to friends, co-workers, and community members for sponsorship, using his own weight-loss to raise awareness and money for suicide prevention. But while support comes from surprising places — a co-worker who lost his own father to suicide, a documentary filmmaker with less-than-honorable intentions, and others — Billy finds his own family strongly resists the endeavor, preferring to stay out of the public eye and away from the still-stigmatized issue of suicide.

Rohan’s debut novel takes readers into the deepest depths of a father’s heart (and at times, stomach) exploring compulsive eating, weight-loss, suicide and suicide prevention, and ultimately the conviction of spirit that it takes to survive when taking even one more step forward seems impossible. And the novel is a quiet page turner: immediately drawing you into the lives of Billy and those around him, into their memories of how Michael lived and how he died, and inspiring you to root for Billy every step of the way. Believe me, you’ll love it.

“All my stories are sparked by character,” says Rohan, who has also published two story collections: Goodnight Nobody and Cut Through the Bone. “Billy came to me one night after I overheard a conversation in a bar. The conversation centered on an obese woman whose brother had just died: ‘If the weight doesn’t kill her, the grief will.’ I couldn’t stop thinking about the woman. What if her weight or grief didn’t kill her but, instead, drove her to do something extraordinary? Within moments I had a very clear picture of a fictional character, Billy Brennan.”

“I knew that Billy Brennan’s story somehow tied into suicide, being fat, and something extraordinary,” Rohan tells Bustle. “It would be years and several drafts later, though, before I figured out what became the final premise.”

As it turns out, as much as Billy’s is a story of resilience, the writing of Billy’s story was a story of resilience as well. Initially written as short fiction, The Weight of Him was met with repeated rejection, despite being longlisted for the 2009 Davy Byrnes Short Story Award. (Rohan’s advice? Believe. Persevere.) Finally, after connecting with a writing group, Rohan realized the story needed to be a novel of its own.

“I was surprised by how much fear I felt throughout the writing of this novel. I was taking on two complex and difficult issues (obesity and suicide) and there was so much to get wrong," she says. "The fear was paralyzing and countless times I abandoned the book. Billy wouldn’t let me be, though. My gut whispered, so much to get wrong, yes, but so much to get right, too. I returned to the story again, abandoned it again, and so on. Then I’d read another essay or article about suicide and/or fat-shaming, and that voice would start up again in my gut, telling me I was writing a story that needed to be told. I finally gave myself over to Billy and his world entirely. I just couldn’t leave the work, or Billy, undone.”

Being awarded the first Plumeri Fellowship and a month-long stay at The Wellstone Center, in the Californian Redwoods, helped give Rohan the time and space she needed to work on the novel. “I was thrilled to win the first Plumeri Fellowship for The Weight of Him. I spent that hallowed time in that gorgeous space completing the novel’s final edits. At Wellstone, I wrote some of my best work, including scenes from the second novel I’m currently working on," she says.

“I love my characters,” says Rohan. “I know their stories. Hearts. Souls. Sitting in isolated contemplation with them is one of my all-time favorite things to do. Should I admit that? Hell, I’m admitting that.”

Around the same time the first seeds of Billy’s story were germinating in Rohan’s mind, the author had been recently shocked by her own loss — that of a dear friend to suicide. She was also secretly struggling with depression and suicidal thoughts of her own.

“There’s a definite and disturbing rise in suicide,” says Rohan. “In fact, suicide and obesity are now global epidemics. I think the factors involved are myriad and unique to each individual. There are also commonalities. I just read an advance copy of Lee Daniel Kravetz’s science memoir, Strange Contagion (June 27, 2017, HarperWave/Harper Collins) and found it fascinating, and by turns chilling and uplifting.”

For those unfamiliar with the forthcoming title, Strange Contagion takes readers to Palo Alto, California, where one of the top public high schools in the country suffered a rash of teen suicides — nine students in four years.

“It turned out there wasn’t a single unique cause, but a perfect storm of common social contagions that included fear, greed, hysteria, anxiety, acting out, and intense work ethics," she says. "Catchable thoughts, emotions, and behaviors that spread like psychological viruses and led vulnerable children to become a part of one of the worst suicide clusters in US history. Kravetz met with top researchers from Stanford, Yale, and NYU dedicated to social emotional learning. Their studies prove that it is possible to counter harmful social contagions with other welcome social contagions, such as catchable resilience, happiness, and hope.”

It is that kind of catchable resilience and hope that makes Billy Brennan such a sympathetic, compelling character. From the first page Billy is wholly transparent and fully present in a way that will not only have readers cheering him on, but will leave you feeling like you’re walking alongside him, shedding your own burdens with every step. Standing in stark contrast to Billy is his son, Michael. Michael has already died when The Weight of Him begins, and so his story remains a bit of a mystery. What readers do learn about Michael is filtered through his family’s memories of him — often leading to more questions about the teen and his death, than answers.

“The greatest parallel between Billy and Michael is that they both erased themselves, in very different ways and with very different consequences. Throughout the years of writing this novel, the Humpty Dumpty nursery rhyme almost tormented me with its near-continuous loop in my head. The entire novel tries to put Billy, Michael, and more, back together again.”

“Like all my writing, the novel is most concerned with its characters and the truth of who they are, and why they are who they are,” says Rohan. “It’s also concerned with any shifts in the characters over the course of the story. What is revealed about Michael is as much as it felt right and honest to tell. In my own experiences, suicides leave behind more questions than answers. And beyond suicide, there’s so much in life that is sometimes heartbreakingly, sometimes joyfully, mysterious and I wanted to stay faithful to that too.”

Throughout the novel Billy struggles to gain support from his family. While Billy sees the necessity in going public with his weight-loss campaign, his wife Tricia, his parents, and his surviving son John, all just want to slip quietly back into what remains of their lives.

“After Michael’s suicide, the family struggles beneath the glare of a community spotlight that is both real and imagined,” Rohan says. “With Billy’s public weight loss campaign, that glare turns to a burning scrutiny that is again both real and imagined. The lack of support for Billy also stems from a pervasive and infuriating belief that the marginalized, like the obese and suicidal, are weak and inferior. No one should be reduced to generalizations or such lack of compassion. Because of stigma, bias, discomfort, and misinformation, obesity and suicide are issues that all too many turn away from. The Weight of Him doesn’t look away.”

And neither, readers will find, does Billy. “Billy’s response to grief is to face it full on and take action. His family and others in his community prefer to turn away and to try to get on with the everyday. They are unwilling or unable to speak out largely because of fear: the fear of feeling more pain, of public scrutiny and criticism, of bringing the issue closer to home. Fear and shame breed silence, and silence is killing.”

But even greater than Billy’s struggle with is family, is his struggle with his love for (and emotional dependency on) food. Throughout The Weight of Him food begins to take on a character all its own — becoming a villain equal to that of suicide. Despite Billy’s full-hearted commitment to his cause, there are moments when he’s just clobbered by fish and chips, and other tantalizing snacks. It's a battle between restriction and indulgence, that so many readers will be able to relate to. And it’s a battle that Rohan herself understands as well.

“The first half of my life I was addicted to sugar and fast food,” says Rohan. “Sodas. Chocolate. Fish and chips. Burger and fries. Supersized, please. As much as I hate to perpetuate the clichéd miserable Irish childhood, I was for the most part a very scared and unhappy girl. Food was an unfailing source of self-comfort.”

“However, my relationship to food, like so much in this novel, was riddled with contradictions,” Rohan continues. “I loved junk food, and I hated it, too. All too often, filling myself turned into stuffing myself. As a survivor of childhood physical and sexual abuse, I made myself feel gross physically to mirror how disgusting I felt inside. Now, thankfully, I have a much healthier relationship with food and myself. But in order to write several of the novel’s scenes, I had to summon my painful past and dwell on how food both sustained and “clobbered” me. How it was both reward and punishment. Often the writing proved difficult, but necessary and cathartic too. By remembering and recording, I lit up the dark.”

And at its core, lighting up the dark is exactly what The Weight of Him does for readers.

“In their January issue, World Literature Today wrote that The Weight of Him ‘offers a window into a world most of us will never know,’” says Rohan. “I’d love readers to find The Weight of Him to be a rich, worthwhile experience and to come away from the novel feeling affected and with some greater understanding. Given our current political climate, inclusivity, speaking up, and taking action are critical. We have to tell our stories to each other. We have to be brave and vulnerable. That’s how we get to know and understand each other. That’s how we get to stand together. To rise up together.”