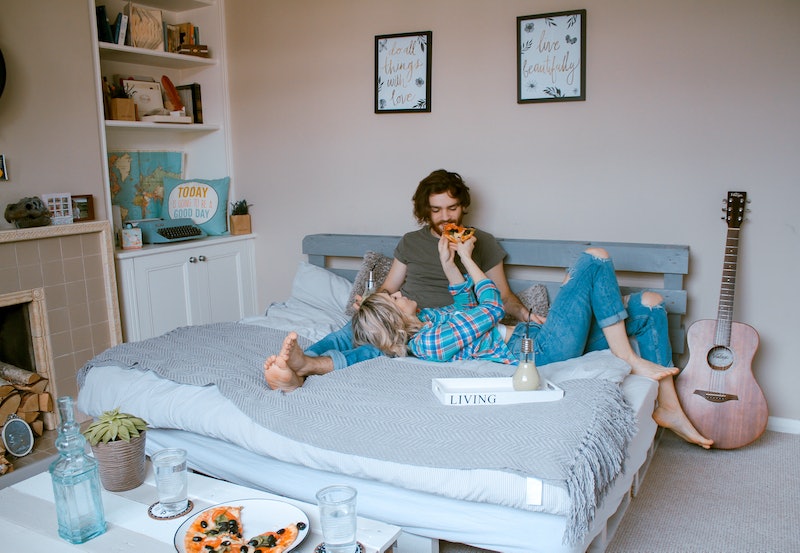 It may not be super noticeable to you at first, but your relationship has a way of changing who you are. You might start picking up habits that your partner does or use language they do that you typically don't. If you have started noticing that you and your partner are becoming the same person, that only means good news for your relationship. According to new research, people in relationships pick up their partner's habits to feel a sense of unity.

"Personalities are our core tendencies. They are essentially who we are, our dispositions, and our ingrained ways of being," licensed clinical psychologist Joshua Klapow, Ph.D. tells Bustle. "That being said, relationships pose interesting challenges to our personalities. They can help shape and mold them in new areas and directions. They can also enhance them, make what we have more potent. As you can imagine we must be very careful when we enter relationships to monitor how being with another person impacts who we are. In some cases the great aspects of our personalities come out stronger. In others, it's the not so great that can come out stronger."

Researchers from ITMO University in Saint Petersburg, Russia and the National University of Singapore created a pretty neat algorithm that takes relationship patterns from a variety of social media posts and can tell whether a user is single or married. Using data from Twitter, Instagram, and Foursquare, the algorithm looks at things such as the number of emotional words and topics that are used in Tweets, the kind of pronouns a person uses, and the places they go, among others.

As researchers found, the algorithm was accurate in predicting relationship status 86 percent of the time. Lately, the algorithm hasn't been getting attention due to its general insight on relationships, but its insight into President Trump specifically. While researchers ran former President Obama through the algorithm and accurately predicted his marital status, Trump's Twitter habits actually identify him as single.

But the study found that in general, people's social media use and personalities do end up changing when they enter into relationships. Here's how: