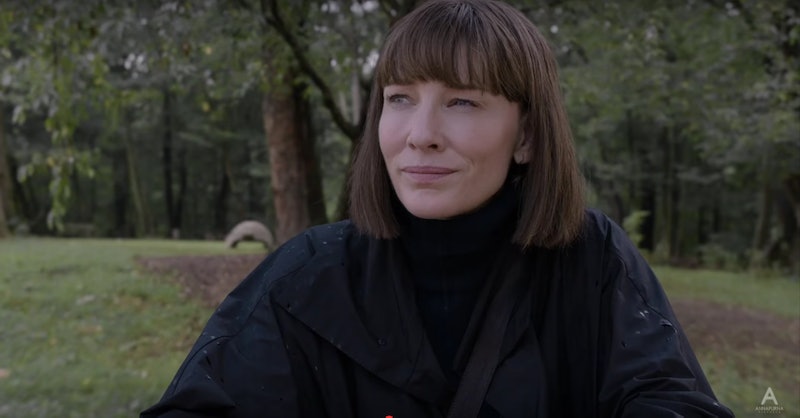 While it's easy to get excited about Cate Blanchett starring in Where'd You Go, Bernadette? it's worth taking a look at the supporting cast of this big screen adaptation of Maria Semple’s 2012 novel of the same name, too. Seriously, every funny woman ever is in the Where'd You Go, Bernadette? trailer. It's not like you needed another reason to see this delightful comedy mystery hitting theaters on March 22, 2019, but you just got a whole lot more.

Blanchett plays Bernadette Fox, a former architect who seems to have everything, including impeccable style. Just look at those bug-eyed sunglasses and that bob! It's why it's so shocking when she unexpectedly disappears. No one has any idea where she could have gone, which leads her husband Elgin (Billy Crudup), her young daughter Bee (Emma Nelson), and everyone else in her neighborhood on a wild goose chase to the ends of the Earth to find her.

Blanchett's Bernadette let's Bee know that she wants to "die of cuteness," but you might actually die from laughter after seeing this film. When you do feel free to blame it on Kristen Wiig, Judy Greer, and Megan Mullally, who each play a role in this runaway mystery comedy.

In Where'd You Go, Bernadette?, directed by Boyhood's Richard Linklater, Wiig plays Audrey, Bernadette's neighbor and one of the parents at Bee's private school who Bernadette happens to be feuding with. Audrey claims Bernadette ran over her foot with her car, something Bernadette doesn't deny despite it being untrue.

While the trailer for this screwball comedy doesn't delve into their feud, it does show Wiig getting in on the case, as shocked as anyone that her nemesis has vanished. Interestingly enough, she seems more than happy to try and find her, despite the whole possibly running over her foot thing.

A monotone Mullally makes a quick cameo in the trailer. As does Greer, who plays Dr. Kurtz. It's she that helps break down Bernadette's bathroom door only to find out she's long gone. It's not the only surprising thing Bernadette's friends and family, specifically her daughter, will learn about her after her disappearance.

The film also stars another woman that may look familiar, even if you don't see her in the trailer. Pretty Little Liars' Troian Bellisario who's no longer looking for A, is now working with B. As Becky, it's Bellisario who ends up befriending Bernadette on her unlikely journey to find herself.

Thanks to this movie, movie fans might even discover a few new funny ladies like Nelson, who is making her film debut withWhere'd You Go, Bernadette? Someone else movie goers should look out for is Zoë Chao, who plays Soo-Lin, a friend of Audrey's and Elgin's assistant. Chao, who is best known for the Facebook Watch series Strangers, is all over this trailer, which isn't all that surprising since Soo-Lin also plays a big role in Bernadette's disappearance. For those who haven't read the book, don't worry, no spoilers here.

Where'd You Go, Bernadette? might be all about the disappearance of the titular character, but from the looks of the trailer, it's also a celebration of some very funny women.