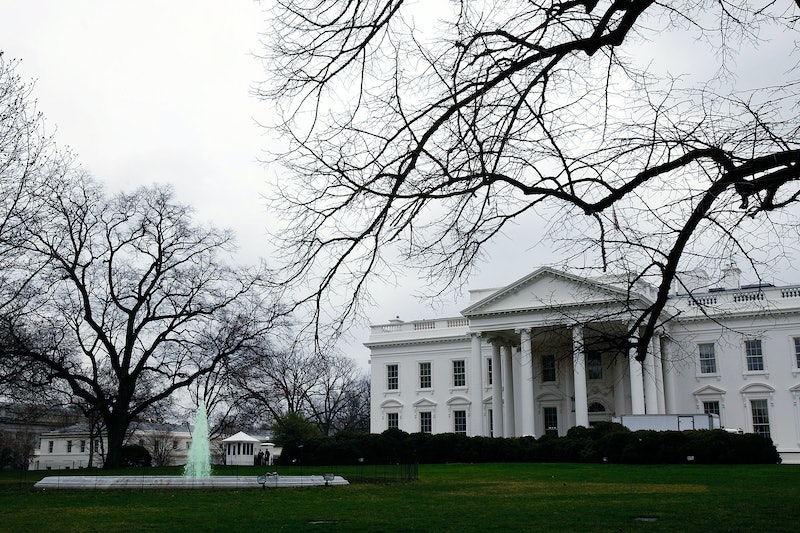 The partial government shutdown has caused many important bills to go unpaid. One is the federal water bill for Washington D.C., which is quite large since there are tens of thousands of government employees in the area. During a Thursday board meeting, officials at the DC Water and Sewer Authority (DC Water) joked about shutting off the White House's water during the shutdown, per radio station WAMU.

"We received an email Wednesday, January 2, from an individual at the bureau of fiscal services at the treasury," Matthew Brown, the company's chief financial officer, reportedly said at the meeting. He explained that the government was missing payment on nearly a third of its quarterly water bill because of the shutdown. Out of the $16.5 million bill, $5 won't be paid on time, per WAMU.

"That brings up an interesting question," joked Tommy Wells, the DC Water board chairman. "Is there a time from nonpayment when we cut someone's water off?" A board member chimed in: "1600 Pennsylvania Avenue, is that what you're talking about?"

DC has already been missing some crucial services since the shutdown began. The National Mall has a more limited staff than usual, for example, which means restrooms and litter haven't been receiving their usual attention. WUSA reported last month that trash was collecting on the ground there. To fix the problem, Mayor Muriel Bowser ordered the local agency DC Public Works to deal with litter until the end of the shutdown.

Multiple entities technically have the authority to shut off water to the White House while its bills remain unpaid. "Conceivably, DC Water can shut off service for nonpayment to any customer," Vincent Morris, a spokesperson for the company, told WAMU. "We don't do it very often. It's a last resort; we never want to do it."

Morris added that the company first tries to work out payment plans that accommodate the needs of the defaulting customers. "Obviously, for things like the General Services Administration for the federal government it's a slightly different process, because we know they're good for the money," he added. "It's just a question of when it's actually going to be transferred."

If 30 days were to pass from when the government was supposed to pay the bill, Mayor Bowser would be allowed to shut off the White House's water if she wanted to, according to DC code. She could even institute a lien (a legal claim to part of a defaulting customer's property) after 60 days. While it seems all but impossible that Bowser would specifically target 1600 Pennsylvania Avenue, the rule seems to indicate that the city could claim a right to part of the White House property (the equivalent of "the current full amount of the unpaid water ... charges") until the debt was paid. "The real property may be sold for the unpaid water ... charges," the city code reads.

WAMU asked Morris whether DC Water would ever threaten to shut off the water supply unless a deal to reopen the government was reached. It's "an interesting idea," Morris said. "Water is leverage," he added. "No one wants to go without it."

Wednesday marked 19 days since the government partially closed. If the stalemate continues until Saturday, it will become the longest shutdown in U.S. history, according to The New York Times. Thousands of federal workers are not getting paid and are in increasingly dire straits. On Friday, Trump threatened to keep the government closed for "months or even years."