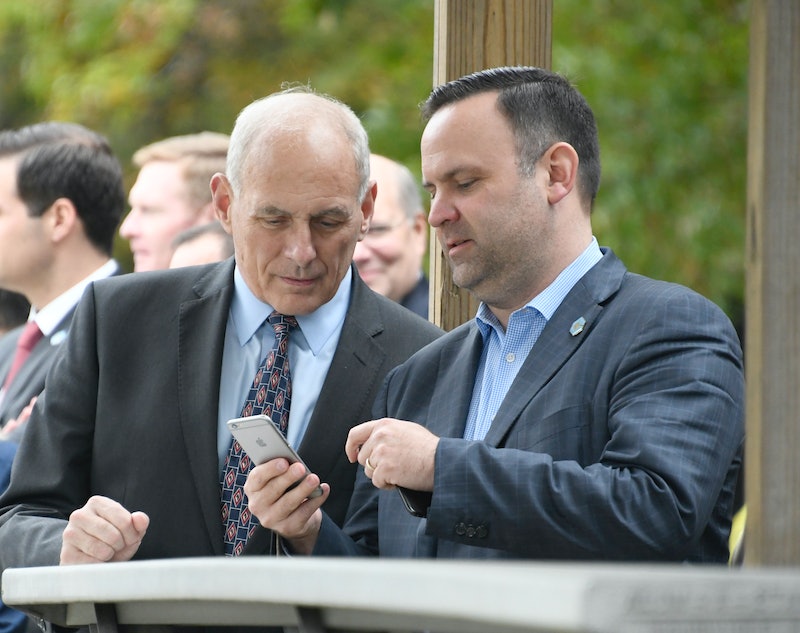 Since Trump took office, the White House has been dogged with concerns about leaks, with inside information about everything from the president’s preferred way of digesting news to his fury about the women’s march crowds making its way into the mainstream press. A new regulation being considered by the administration may make it harder to get these leaks out, as the White House is considering a ban on personal mobile devices for its staff — officials insist, though, that the measure was introduced due to cybersecurity concerns.

White House officials told Bloomberg that the proposed device ban was being pushed by chief of staff John Kelly, whose personal phone was hacked earlier this year. Revelations of the hacking raised concern about international security, as experts considered whether foreign governments could have accessed sensitive data about the United States. This particular ban would lower the risk of such hacks, but as Bloomberg reports, not all staffers are happy about it.

Currently, White House staff members are not permitted to send texts on government-issued mobile devices, nor use Gmail or Google Hangouts. Bloomberg reports that some Trump administration staffers are concerned a personal mobile device ban would impede them from reaching their families during the day. Others have expressed worry about receiving backlash from the public for using White House phones for personal matters.

The internet had fun with this latest bit of palace intrigue. One D.C. blogger joked that for any millennial working in the White House, "this has to be like a Twilight Zone episode where you made a deal with the Devil and then end up in your own personal hell." VICE journalist Eve Peyser wrote the staffers were concerned the ban "will cut them off from the remaining friends and family members who they are still on speaking terms with."

But as Newsweek noted, the individual who might have the most trouble adhering to a personal device ban is the president himself. Trump is wont to send tweets from his personal Android phone, a habit that has sparked concern throughout his year-long presidency. In March, security expert Nicholas Weaver told The Atlantic that this particular device was well-known to have security issues, so much so that Weaver estimated the phone was "compromised by at least one—probably multiple—hostile foreign intelligence services and is actively being exploited."

Journalist James Harrigan pointed out that Trump's use of a personal mobile device was a more obvious threat than that of any of the staff.

This wouldn't be the first White House administration to institute extra precautions when it comes to personal mobile devices. Barack Obama was famously restricted to using a Blackberry for most of his presidency, joking once to Jimmy Fallon that he was told by his staff, "this is a great phone, state of the art, but it doesn’t take pictures, you can’t text, the phone doesn’t work, you can’t play your music on it." The Obama administration initiated the policy that now bans White House staff from sending texts on official phones.

Should the Trump White House decide to go through with the ban, staff will have to start paying careful attention to how they communicate. Communications made on a government phone are considered public record, and all phone calls placed on these devices are archived and will one day be made public. Despite the criticism that some members of Trump’s administration have directed toward Hillary Clinton for using a personal email account to conduct business during her time as secretary of state, some of the president's staff have been known to do the same. Back in October, Politico reported that Jared Kushner and Ivanka Trump had used a previously unreported personal family account to conduct White House business.

More like this
TikTok’s “Miley Stewart Summer” Trend Will Make You So Nostalgic
By Courtney Young
How To Add Music To An Instagram Post
By Emma Carey
Using Your Pet’s Name As A Password? Here’s Why You Might Want To Change It
By Cristina Sanza
How To Use The Crying Filter On Snapchat, TikTok, Instagram & More
By Emma Carey
Get Even More From Bustle — Sign Up For The Newsletter