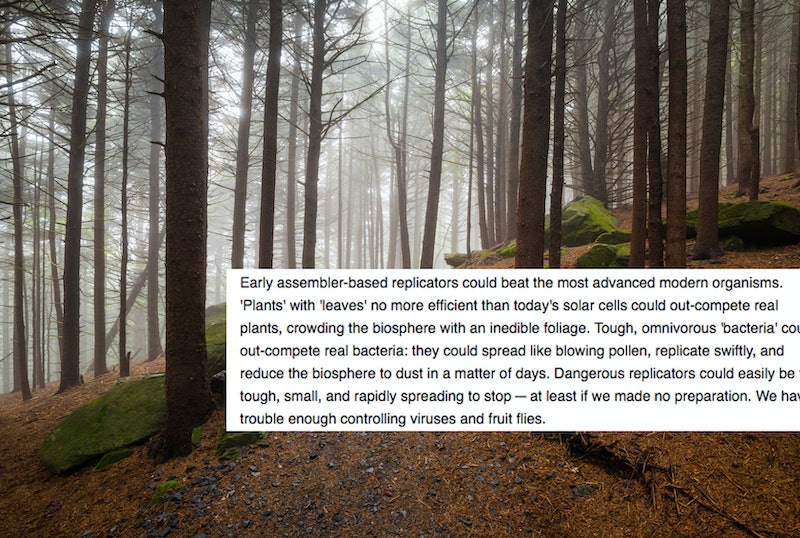 Wikipedia is a vast, vast place. And, amidst all of the pages for TV shows, actors, books, and historical events, there are some Wikipedia pages that are a bit... well, explainably unexplainable. They're also usually super creepy, and about apocalyptic theories that I'm sure are looking more and more likely now that Donald Trump is president of the United States. Case-in-point: The Wikipedia page for "grey goo" summarizes the doomsday theory well, but it's also massively mysterious at the same time. Also, it's so creepy and fascinating, you should absolutely read it — but, you know, maybe with the lights on.

So, what is "grey goo"? Well, according to its Wikipedia page, the name is a bit misleading, as it has nothing to do with goo. Instead, it's a doomsday theory that was popularized in the late '80s by two nano technology pioneers in the book Engines of Creation (1986). The book, written by K. Eric Drexler was about molecular nanotechnology — aka, complex machines that are built up from a molecular level. If you're scratching your head because the only reference you have for the "nano technology" is your iPod Nano, same. But think about it this way: Humans are made up of nanobytes in a way, tiny cells that replicated over and over and over until new life was created. So, nano technology is basically the technological equivalent of that.

In the book, Drexler explains a world in which molecular nanotechnology is controlling the world instead of people — but the the story doesn't begin with ominous intentions. The idea behind the technology is that environmental robotic devices would be getting rid of pollution, medicinal robotic devices would be fixing health problems internally, and scholastic robotic devices would be storing and transmitting all of our data. And for a moment, the book paints an idealist concept. If things remained this way, and the devices did exactly what we created them to do, this would be great. This is a concept in which molecular nanotechnology is helping us. It's making the planet cleaner, it's improving our health, it's simplifying our carbon footprint, it's essentially making life on earth a lot more functional and resilient than it was before.

But then, as with all doomsday theories, this technology takes a turn for the worst. What if the environment molecular nanotechnology started consuming more than trash in the ocean — like, what if it starts consuming whales? What if the medicinal molecular nanotechnology starts opening up more than arteries, and starts opening up veins and organs? What if the technology is built in such a self-sufficient way that it's able to self-replicate faster than humans? As Drexler himself pondered in Chapter 4 of his book:

Imagine such a replicator floating in a bottle of chemicals, making copies of itself...the first replicator assembles a copy in one thousand seconds, the two replicators then build two more in the next thousand seconds, the four build another four, and the eight build another eight. At the end of ten hours, there are not thirty-six new replicators, but over 68 billion. In less than a day, they would weigh a ton; in less than two days, they would outweigh the Earth; in another four hours, they would exceed the mass of the Sun and all the planets combined...

Soon, the technology outnumbers the life on Earth and takes over the planet and consumes all biomass, and humanity — including itself, because part of the theory suggests new grey goo would be able to replace old grey goo. Isn't that exciting?!

But before you say goodbye to a good night's sleep (I told you to read this with the light on!), keep a few things in mind. First of all, this is a doomsday scenario, and the sole purpose of doomsday scenarios are so scientists in particular can consider a number of outcomes during the creation of different technologies and the like. Additionally, the level of molecular nanotechnology that humans have created as of this moment is not advanced enough to accomplish the things theorized by Drexler. We simply don't have technology that is capable of consuming biomass on a grand scale, and thank Beyoncé for that. The theory is simply a creepy, fascinating, science fiction-y one to read — and that's all.

So just remember that when you're trying to fall asleep tonight but can't because you're worried some robotic air particles will fly to your brain through your noise and eat your frontal cortex or something: It probably won't happen. And also, on the bright side, now you have a fun, creepy theory to scare people with at parties!