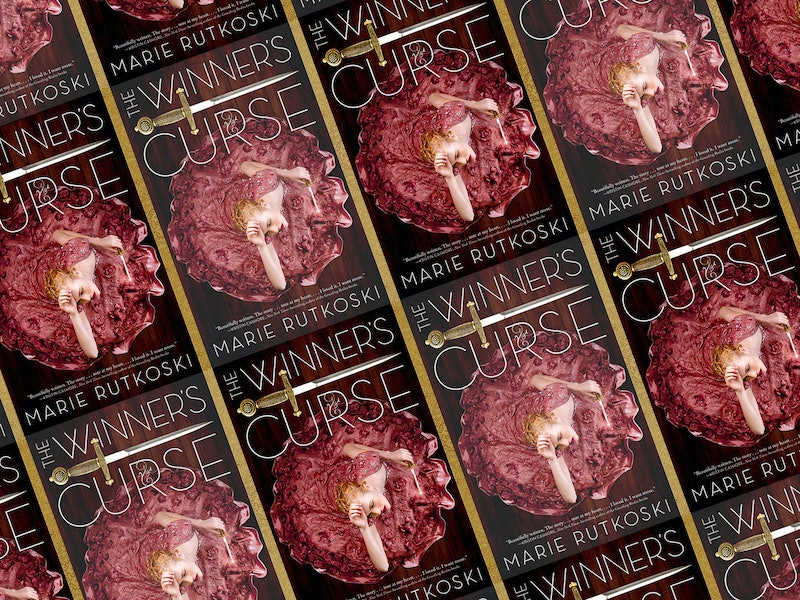 Bustle's I'm So Jealous series is dedicated to the books, TV shows, movies, podcasts, and more that super fans are so jealous someone else gets to experience for the first time. In this installment, Kerri Jarema writes about the YA fantasy novel Marie Rutkoski's The Winner's Curse, the first book in the Winner's Trilogy.

It was 2014 when I first picked up Marie Rutkoski's The Winner's Curse. I didn't know then that my life was about to change forever. One never does see these pivotal moments coming, right? But in 2014, I read The Winner's Curse... just weeks before I would experience my first bout of anxiety.

I didn't realize at the time just how overwhelmed I felt. I had been working from home for about a year, and trying to get an editorial project off the ground. One-hundred-hour work-weeks had become my norm. It was exciting work, but I was stressed constantly, and I'd begun to feel like I'd lost the love that had inspired me to start in the first place. I finally turned to books to help quiet my ever-churning mind. That was when I spotted The Winner's Curse at the library. I judged the book by its gorgeous hardcover, but I was thankfully also pulled in by the plot.

Kestrel is the 17-year-old daughter of a general who has two choices: join the military or get married. But Kestrel has other intentions. One day, she's surprised to find a kindred spirit in Arin, a young slave up for auction. Kestrel buys Arin, and it’s not long before she has to hide her growing love for him. But Arin has a secret, too, and Kestrel quickly learns that the price she paid for a fellow human is much higher than she ever could have imagined.

The Winner's Curse enthralled me from the very first page. Rutkoski explores and upends an inherently problematic trope by flipping the power structure, brilliantly dismantling so much of what we know about slavery, privilege, and culture. Oh, and about the love story: I cannot even think about Kestrel and Arin without wanting to curl up into a ball, and rock back and forth while squealing intermittently. Seriously, it's giving me a stomach ache just writing about it.

But Winner's also gave me a gift: an escape from the daily grind, and a reminder of why I love books so much. My excitement over reading again led me to make some real changes in my life. I took on a part-time job as a children's bookseller, where I spent two years talking about The Winner's Curse (and, ya know, other books, too) to anyone who would listen. Soon, I felt ready to return to editorial, and to writing about my favorite books every day. My anxiety was not yet a thing of the past, but I had fully embraced one of the book's messages: There is always a chance to seize something you've lost.

If you’re picking up The Winner's Curse for the first time: I promise, everything is going to be OK. I know it might not seem like it now, but it will be. And if you ever want to talk to me about a certain scene in which a certain someone might just offer to intricately and delicately braid another certain someone's hair, I am here for you.

If you love it and want more of the same: You should pick up The Winner's Crime and The Winner's Kiss right now! And be thankful you can marathon this series, unlike those of us who had to wait a year in emotional turmoil between books. Also, when you finish the second book, you might want Rutkoski's @ just so you can ask her a few questions (including number one: how dare you?) but please refrain. Just keep reading.

And if this book converts you into a member of the Cult of Marie: You'll have to join me in suffering for a while as her next release, Fall Like Thieves, has a current release date of Jan. 2020. But if that book is anything like Winner's, it will be more than worth the wait.