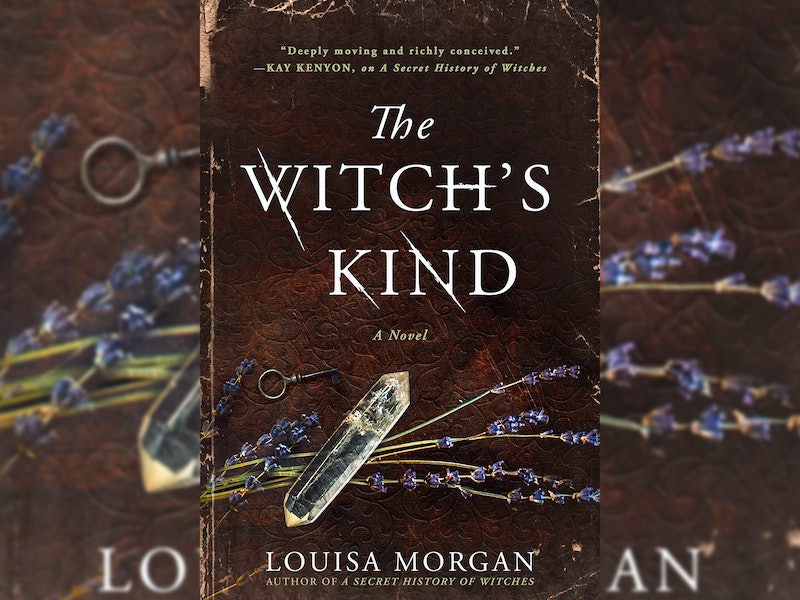 In 2017, Louisa Morgan cast a spell on critics and readers alike with A Secret History of Witches, a moving, multi-generational story of mothers, daughters, and the power of witchcraft. Now, the author is back and ready to enchant readers again with another novel about magic and family, The Witch's Kind. It doesn't hit shelves until next year, but Bustle has an exclusive look at the cover and an excerpt you can start reading right now.

Set in the Pacific Northwest in the aftermath of World War II, The Witch's Kind tells the story of Barrie Anne Blythe and her aunt Charlotte. Determined to keep their strange and dangerous family secret hidden, the two women live solitary lives on the outskirts of their small coastal community. That is, until two separate incidents send other people crashing into their world. First, an abandoned baby appears nearby with what seems to be a hint of a power like their own. Then, Barrie Anne's long-lost husband returns — only the man he appears to be is nothing like the man she married. When nosey neighbors, the government, and even their own family threaten their lives, Barrie Anne and Charlotte must decide how far they are willing to go in order to protect themselves and the child they have come to think of as their own.

A bewitching tale of love, family, sacrifice, and magic,The Witch's Kind doesn't hit shelves until March 2019, but Bustle has a sneak peek at its cover and an exclusive excerpt below.

The Witch's Kind by Louisa Morgan, $26, Amazon or Indiebound

I blew out a breath, pulled down the blanket, and pivoted so Charlotte could see the infant’s head of spun-sugar hair.

“My God.” Charlotte took one step and stopped again. “That’s a—That’s a baby!”

Charlotte’s hand trembled so that the jars in her string bag rattled together. She seemed to have trouble getting her breath. “Barrie Anne,” she finally croaked. “What have you done?”

I spoke above the child’s head. “It wasn’t me. It was Willow.”

“Willow found her, on the beach, I think. Carried her here.”

“On the beach?” Her gaze met mine, suddenly sharp.

I held the baby tighter. “It seems so.”

“How did Willow carry her?”

I gave her a weak smile. “Like she carries everything. Gets her mouth on it and lifts.”

“Willow found her, on the beach, I think. Carried her here.”

Charlotte took off her hat and tossed it onto the divan. She approached, bent to look into the baby’s face, and gasped. I knew those luminous green eyes, with their long, fair lashes, had opened.

“Where’s her mother, for heaven’s sake?”

“No idea in the world. I need to go look for her, but—I didn’t want to leave the baby, and I didn’t want to take her with me in case…” I shrugged my free shoulder. “What I might find—I doubt it’s good.”

“Such a tiny baby! Newborn?”

“I would guess a month or so, wouldn’t you?”

“She must have been. She was soaking wet.” I led the way to the kitchen, with Charlotte following. “See that little mound of flannel? She was wrapped up in that.”

Charlotte walked past me to crouch beside the fabric. She stripped off her gloves, and her artist’s hands investigated it, touching, stroking, testing a fold between her thumb and forefinger. She got to her feet, frowning. “It looks like an old blanket.”

“That’s what I thought. She was sort of—well, swaddled in it, I suppose.”

“I don’t have any answers. I couldn’t think what to do with her, so I dried her off and then wrapped her in this thing.”

“And called me,” Charlotte said, with a twist of her lips. I had caught her unprepared. She wasn’t wearing her usual lipstick, nor were her eyebrows penciled.

“I don’t have anyone else I can call.”

“The police come to mind, Barrie Anne. A lost baby!”

“I thought of that, but—people around here already think I’m weird. What if they thought I stole her?”

“Even you—what was the first thing you said? ‘What have you done?’”

“I spoke without thinking. I know perfectly well you wouldn’t steal a baby.”

“Besides, Willow brought her to me. Me. That means something.”

“I would certainly say so.”

“And Willow found her by the water, Aunt Charlotte, as if the sea brought her, served her up just for me. If I call the police—” My voice shook, and I had to swallow. “If I call the police, they’ll take her away.” The baby stirred against my shoulder, mewing her little cry.

“No doubt they would.”

Charlotte said, “Tell me what happened.”

I opened my eyes to find the infant still gazing at me, her miraculous pink mouth working and working around the rubber nipple, her cheeks growing rosy with the warmth of the milk. I smiled down at her and snuggled her closer in my arms. When the bottle was half empty, her eyelids began to droop. The lashes were as fair as her hair, as wispy as dandelion fuzz.

“I don’t really know,” I murmured, in answer to Charlotte’s question. “Willow came up from the beach this morning, carrying that bundle. I heard a little sound, and I was afraid it might be an animal of some kind. Once I worked up the courage to look—there she was.”

The baby sighed, sinking into sleep. The nipple slipped from her mouth, leaving a small, shining bubble between her lips. I set down the bottle and lifted her to my shoulder, patting her back until a tiny burp escaped her. I couldn’t resist pressing my cheek to her soft head. I whispered, “Look at her, Aunt Charlotte. Such a miracle. A perfect, healthy little girl.”

“That’s not all, Aunt Charlotte. There was something strange last night, this light from the canal.”

“I could see it beyond the orchard, as if it was just beyond the trees. It was late, but I wanted to see what it was, so I went to the beach.”

“In the dark? Barrie Anne, you promised me you’d be careful out here on your own.”

“There was light under the water, glowing, sort of shimmering. It faded so fast, I couldn’t tell what it was.”

“Did you put your hand in the water?”

“I was going to, but the coyotes started up, and I needed to get Willow inside.”

“There was light under the water, glowing, sort of shimmering. It faded so fast, I couldn’t tell what it was.”

“I wish you had, Barrie Anne. Put your hand in the water, I mean. As long as you were there.”

“You never told me about it.”

“No. I’ll tell you some other time. Right now we have to think what to do.”

“You mean, about the baby.” I didn’t raise my eyes, because they had filled with tears.

“You need to figure out whose she is. Find out what happened.”

“I know. I do know that.” I was a little ashamed of my reluctance, though of course she was right. What I wanted, really, was to sit where I was, hold a warm, sleeping baby, and pretend that nothing else mattered, that there was nothing else I had to do.

Charlotte moved to the sink to run water into the milk pan, giving me a moment to recover myself. When the saucepan was clean and the rest of the milk stowed in the icebox, she put her back to the counter, her arms folded. “We need to be practical. What if her mother is out there somewhere, injured, needing help?”

“I can do that later.” I stood up and carried the baby into the front room. Once again, I laid her on the divan. This time, her eyes remained closed. I thought she was too little to roll over on her own—I had learned all about that from Dr. Spock—but I wedged her in with an extra cushion just the same. “I’ll take Willow with me.”

“As if she would let you go without her.”

“Be on the safe side.” Charlotte took one of the high-backed chairs from the dining table and carried it into the front room, where she set it beside the divan. She settled onto the chair and leaned forward to smooth the crocheted blanket with her hand. “Odd things have been going on around here.” She straightened and pulled a cigarette pack from her pocket. “Some strange men are going up and down the peninsula, asking questions.”

“Government, we think. They’re talking about it at the Mercantile.”

“What do they want?”

“They won’t say. They showed up after that incident with the Boise pilot.”

She tapped a cigarette out of the pack, shaking her head. “You should read a newspaper once in a while, Barrie Anne.”

I shrugged. I used to read newspapers all the time, but in the past year, nothing they had printed seemed important.

Charlotte flicked her lighter with a paint-stained thumbnail. “It was in the Trib. He claims he saw weird things in the sky, some kind of aircraft, I guess. Saucer-shaped, of all things. Near Mount Rainier.”

“Military,” I said. We had gotten used to seeing airplanes of all kinds, odd-looking craft that flew out of Ault Field on Whidbey Island. During the war, I often heard their propellers growling through the clouds. Sometimes, when I wasn’t working at Tibbals Hill, I ran outside to stand in the dark to try to catch sight of them, but there was little to see. I had to be content with only the faint gleam of starlight on their wings. I imagined them as airborne leviathans, enigmatic and ponderous, like the whales that swam in the waters around the peninsula.

I started toward the closet beneath the stairs. “I haven’t seen any government men out here, but I’ll take the rifle.”

“Be careful,” Charlotte said, as I pulled out the .30-30 and dropped two shells into the pocket of my overalls.

I imagined them as airborne leviathans, enigmatic and ponderous, like the whales that swam in the waters around the peninsula.

“I will.” I wasn’t sure what I was being careful of, but it was easy enough to promise.

As I opened the screen door, she called, “I mean it, Barrie Anne. There’s something strange going on. I have a feeling.”

Willow followed me down the porch steps and along the path to the side gate. I let her run ahead as we crossed the field. The gun was cool and solid in my hand, and I decided I was glad to have it with me.

I knew better than to ignore Charlotte’s feelings.