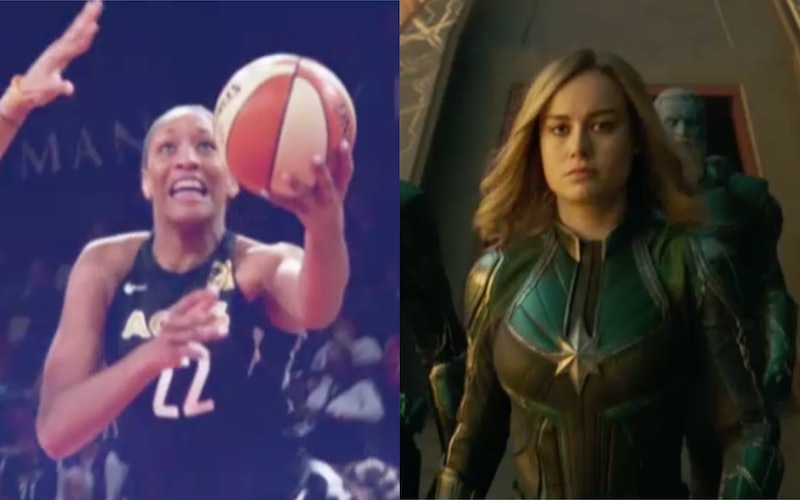 After the drama that took place in Avengers: Infinity War, it's safe to say that Marvel fans across the world have pretty much been holding onto their seats waiting to see what happens next. The next chapter in the Marvel Cinematic Universe is finally almost here: Captain Marvel is coming to theaters in less than three weeks. From the trailer alone, fans are already anticipating that this will be a game changer for Marvel, featuring a strong and powerful female lead as a hero — and now, Captain Marvel is teaming up with the WNBA to spread the message of women's strength and empowerment even more.

In anticipation of the beginning of the WNBA's game season, Marvel and the WNBA just released a team-up titled "What Makes A Hero," a commercial spot that will give you goosebumps when you see it. The two organizations created the short piece to showcases the superhero-like moves and techniques of WNBA players right alongside those of Captain Marvel, played by actress Brie Larsen. In the commercial below, you'll see Captain Marvel and WNBA players like Diana Taurasi, Sue Bird and A’ja Wilson show that women really are real-life superheroes — inspiring girls and women around the world and making sure that they know that they have the strength to do what they love with strength and passion, too.

Here's the exclusive debut of "What Makes A Hero," which will see its television debut during halftime of the NBA All-Star Game on February 17.

“Women like Captain Marvel and our WNBA players define and inspire our own version of super hero in their everyday lives through their strength, speed and power,” said WNBA COO Christy Hedgpeth in a statement to Bustle. “Whether that’s through basketball or striving to be the best they can be in the community, our players are inspiring examples of everyday heroes.”

The NBA All-Star Game will begin at 8 PM EST, live on TNT. You can stream it here with a 7-day free trial. The WNBA's season officially starts on May 24, and you're going to want to see them in action. Meanwhile, Captain Marvel is coming to theaters on March 8 — aka International Women's Day — so you can finally see the superhero herself take care of business on the big screen.

Female empowerment has seen a rise in the world of sports lately, and it's seriously about time. Even the most recent Super Bowl's ads catered more towards women than they have in previous years, putting an emphasis on women's voices. Nike recently made headlines with the release of the Pro Hijab, the company's first ever hjiab for athletes, which female Muslim sports pros have described as a huge step toward inclusion in the sports world. The women of the U.S. gymnastics team made history in their vocality against sexual assault. Seeing this deserved recognition in athletics and in the world at large is something that should remind you of just how incredible, strong, and powerful women really are.

Keep a lookout for Marvel and the WNBA's "What Makes A Hero" commercial when watching the NBA All-Star game, and keep on supporting women who are making change in this world — while understanding that you have what it takes to do so as well.

More like this
Sandra Bullock, Girlboss Extraordinaire
By Matt Harkins & Viviana Olen
The 'Hocus Pocus' Sequel Finally Has A Release Date & It Makes Total Sense
By Shannon Barbour and Radhika Menon
The 'Thor: Love and Thunder' Trailer Finally Shows Christian Bale As Villain Gorr
By Grace Wehniainen
Sadly, 'Fantastic Beasts: The Secrets Of Dumbledore' Isn’t Streaming — Yet
By Arya Roshanian
Get Even More From Bustle — Sign Up For The Newsletter